Kevin Cooney: Phillies need to do more to grab, keep attention of fans 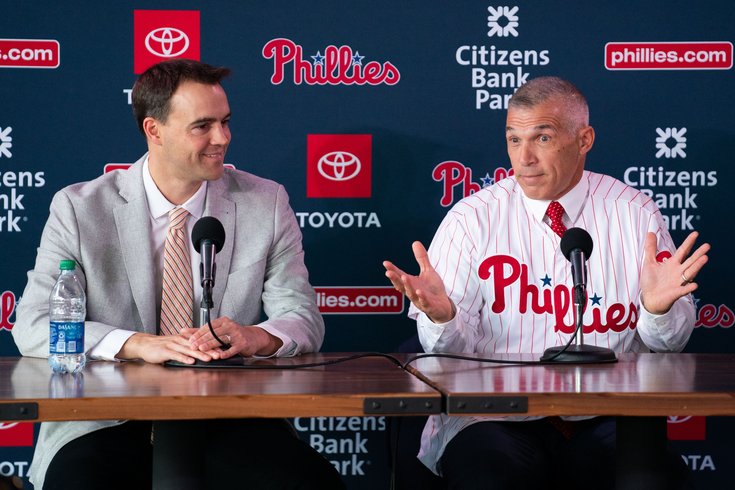 It is a testament to the power of football in this city that the presence of it can drown out everything else in the sports universe around here.

But the E-A-G-L-E-S eclipse has ended. And as winters doldrums move forward and the length of time until Florida’s warm and inviting sun draws shorter, the natural attention starts to turn to where the Phillies are with just about a month to spring training.

That may not be good news for Matt Klentak. Because the Cliffs Notes version of the Phillies off-season could be summed up like this: not much really did change in the overall landscape.

Philadelphia is probably in the same place in the standings in the National League East as they were before- behind the Braves and Nationals, about the same as the Mets, a few paces ahead of the Marlins and likely about an 84 to 86 win team.

Yes, the additions of both Didi Gregorius and Zack Wheeler should help. But what the Phillies have to be hoping is that the addition of Joe Girardi as manager, along with Bryan Price as pitching coach, turns the pieces that are currently in place around.

There is little doubt there’s been a managerial upgrade here and there should be a serious step forward in the leadership end of the club. But in reality, Klentak probably shouldn’t get a ton of credit for that anyway since he would have left Gabe Kapler and Chris Young in place if John Middleton didn’t get in the way.

Think about everything with this team and realize that the questions that entered this off-season are almost the exact same. Even with Wheeler, the starting rotation is still a swampland of mediocrity. The bullpen? Heavily neglected as it appears the club feels all they had last year was all they really needed.

The lineup? Well, how exactly are they filling those centerfield, third base and second base holes with that Jean Segura, Scott Kingery, Adam Haseley combination? Philadelphia didn’t dip their toe into the free agent outfielder or third base pool- a sign of faith that the Haseley/Roman Quinn/Kingery combination will work out just fine. It’s a high boom-or-bust possibility with that combination.

Yes, some of this gets cleaned up when the gloves start popping in Clearwater on Feb. 11. But it is amazing that the Phillies- after a pretty active start to the period- have gone almost into complete hibernation. The luxury tax threshold has cost them an opportunity to get some pieces in the bullpen like Dellin Betances, who ended up with the Mets- who could have really helped.

There are a lot of people in the game, however, that live by two rules. One: never just live off one half of the season for projections. And second: relievers who do well one year tend to regress in a second year. And the Phillies seem to be ignoring both facts.

Be honest, would you be stunned if Jose Alvarez, Ranger Suarez or J.D. Hammer regress this year? If Hector Neris comes out and scuffles – like he has found a way to do the last three seasons- in the closers role for a stretch? And yet, this front office has basically taken the leap of faith that all of those pieces will be improved compared to last year, when they had decent seasons.

That sound familiar? That’s because the exact same thing happened last year with the starters. And we all know how that turned out.

Yes, there could be a lot of moves in baseball made here in the next few weeks before camps open. But it sure as hell sounds like the Phillies won’t be a part of any of them.

If that’s the case and this club reports to Clearwater with the same roster it has now, it would take a lot for this team to contend and not be an afterthought the next time football season rolls around again.