Paul Hagen: When will a true Phillies player make the baseball Hall of Fame?

When Roy Halladay was inducted into the Hall of Fame last summer, the Phillies front office was out in force to support the righthander who, among other accomplishments, had a perfect game, the second postseason no-hitter in baseball history and a Cy Young during his time with the organization.

Rightfully so, even though Halladay’s plaque depicts a blank cap.

A year earlier, when Jim Thome accepted his admittance in Cooperstown, the Phillies also had a large contingent to support the slugging first baseman whose arrival in 2003 had done so much to change the franchise’s drooping image.

Regardless, any time a former Phillie receives baseball’s ultimate honor, the question of when the next person with local connections might be on the stage at the Clark Sports Center arises.

So the first thing that jumped out when this year’s Hall of Fame ballot arrived in the mail was how many players with significant ties to the Phillies were listed. Six to be exact. From left to right: Bobby Abreu, Raul Ibanez, Cliff Lee, Scott Rolen, Curt Schilling, Billy Wagner. 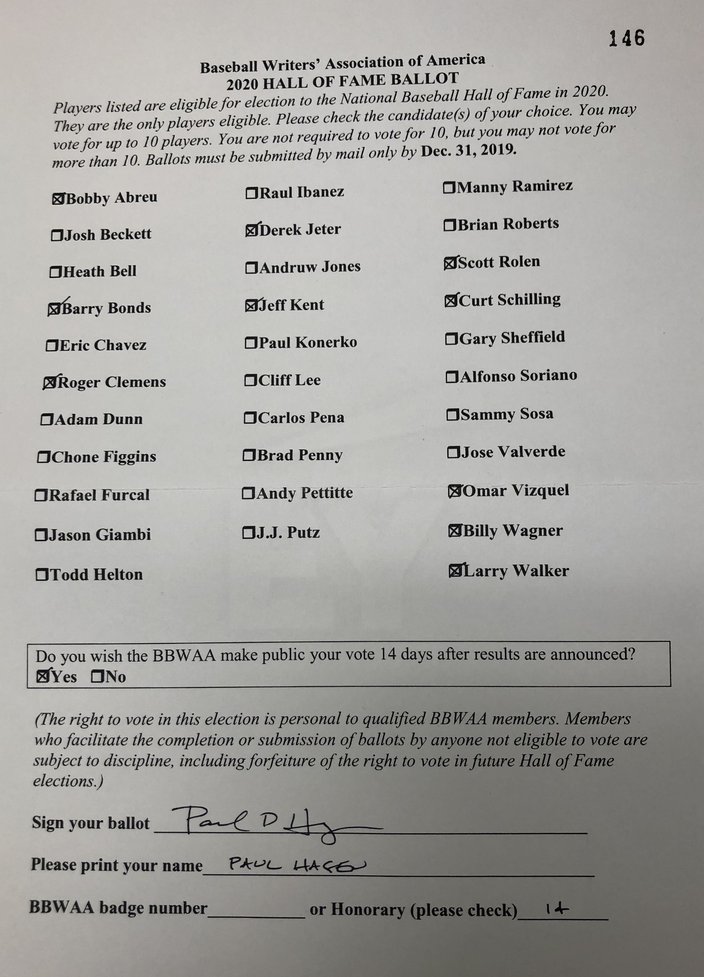 The first objective for any voter is to be as fair as humanly possible. The guidelines allow a lot of room for interpretation, but personal prejudices shouldn’t be part of the process. Truth to tell, that can be difficult with a player you’ve covered, although it’s a sword that cuts both ways. If you didn’t get along with a guy, that shouldn’t be held against him. If you did, that shouldn’t be part of the calculation, either. And nobody wants to be seen as a homer.

Personal feelings aside, it’s natural to more fully appreciate the contributions of players we have the opportunity to watch day in and day out.

With that in mind, will Phillies fans have a reason to celebrate when the results of this year’s voting are revealed on January 21?

Due to Ryan Thibodaux’s Baseball Hall of Fame Tracker, we already know – two weeks out – that Schilling is the only Philly-connected candidate with a realistic chance to make it this year. At last report, Tuesday afternoon, he had been named on 84.5 percent of the ballots revealed by members of the Baseball Writers Association of America, well above the 75 percent threshold needed for selection.

If Schilling makes it, my guess is that he’ll opt for a blank cap. While he’s talked many times about how his career didn’t get on track until he came to the Phillies and began to work with pitching coach Johnny Podres, he helped the Diamondbacks win the World Series in just the fourth year in team history and then went on to become a Boston icon with two more rings, including the incredible reverse-the-curse 2004 season when the Red Sox won in all for the first time in 86 years.

He was the best big game pitcher I ever covered. He was far ahead of the analytics curve. He could be prickly, but could also be incredibly generous. His candidacy has probably stalled to this point because of some toxic postings on social media (that cost him his job at ESPN) and hard right political leanings. Whether or not that the latter should be considered demerits under the so-called “character clause” are open to interpretation.

He also has a career 127 ERA+ (better than recent inductees Mike Mussina and Jack Morris) and finished second in the Cy Young voting three times.

Rolen, overall, is not remembered fondly in these parts. He left a not-entirely-accurate impression that he didn’t care for the city or the organization before forcing a trade to the Cardinals.

The irony is that while he had some reservations about the way the Phillies operated in those days, especially financially, many of his complaints closely tracked those of the fan base at the time. It probably didn’t help that he openly clashed with popular manager Larry Bowa.

But let’s stick to the facts: He was a seven-timer All-Star. He won eight Gold Gloves; only Mike Schmidt and Brooks Robinson won more at third base. He had a 122 OPS+ and a 70.2 career WAR (ninth in history at his position). And while there’s not a stat to show it, he was the kind of baserunner who could impact a game once he got on despite not having above average speed.

Despite all that he was named on just 10.2 percent of ballots in his first year of eligibility and 17.2 percent last year. He’s clearly on an upswing. Cap guess: Cardinals or blank.

Wagner’s tendency to speak his mind rankled some while he was with the Phillies and others after he became a free agent and signed with the Mets. But he was one of those closers who changed the way opposing managers set up their game, knowing that once he came into a game in the ninth, it was pretty much was over.

There are lots of stats that demonstrate his dominance, but here are just two: In 903 career innings he allowed 601 hits while striking out 1,196. And his career WHIP of 0.997 is the second-best of any pitcher in history with a minimum of 900 innings. Cap guess: Astros or blank.

I’m shocked that Abreu hasn’t gotten more support in his first year on the ballot. His blend of on base percentage, stolen base and power led to an .870 career OPS even though he hit “only” 288 home runs. I suspect that, like Rolen, his support will grow over time. Cap guess: Phillies.

Lee (cap guess: Indians or blank) and Ibanez (cap guess: Mariners) appear destined to fall off the ballot for not receiving at least 5 percent of the vote, but will ultimately be considered by the Veterans Committee. Both deserve at least a closer look.

After that? Well, Shane Victorino will be eligible for the first time next year; Jimmy Rollins, Ryan Howard and Jonathan Papelbon in 2022; Carlos Ruiz in 2023 and Chase Utley in 2024.