MLB Rumors: The Phillies wouldn't trade for Nolan Arenado, would they? 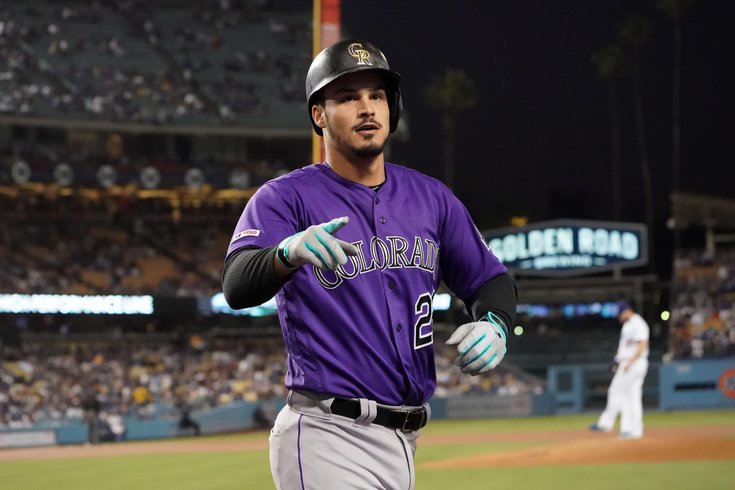 Before you roll your eyes and start browsing for more Phillies rumors, this one is worth a few minutes of consideration.

Prior to ever hitting the free agent market, the Rockies locked third baseman Nolan Arenado down for a ridiculous eight-year deal, worth $260 million deal about a year ago. The initial thought was that the five-time All Star would be a Rockie for life.

And then reports came out last week that Colorado may have some buyer's remorse:

Rockies are willing to listen to trade inquiries on superstar 3B Nolan Arenado (and anyone else); they’ve gotten many calls on him since trade deadline. Would shake up monster 3B market (Rendon, Donaldson, Bryant) but no one sees as likely yet. Has full no-trade so up to him.

#Rockies are open to discussing Nolan Arenado in trade talks, source confirms @JonHeyman report, although it's unclear if there is any traction in talks. Arenado is a natural fit for the #Dodgers, as an alternative to signing Rendon or trading for Lindor. @MLB @MLBNetwork

Rendon is off the board, but while Lindor trade talks seem to be slowly and without urgency taking place behind closed doors, there has not been much news of late on the Arenado rumor thrown out by two of the more "in the know" MLB insiders.

However, MLB.com included the Phillies as one of six potential suitors for the infielder earlier this week, a flight of fancy just enticing enough to warrant some attention:

Phillies get: 3B Nolan Arenado

Why it could work: Who says the Phillies can't still win the offseason for the second year in a row? This trade would require Philadelphia to exceed the $208 million Competitive Balance Tax threshold in 2020, but if the Rockies take back Bruce and Robertson, who is recovering from Tommy John surgery, it would cut down the Phils' CBT number by $23.5 million and put them a Jean Segura trade away from getting under the tax line. Even if the Phillies pay the tax for one season, they have Jake Arrieta coming off the books next offseason, which would help them reset the penalty in 2021. Meanwhile, Arenado slides into the lineup alongside Bryce Harper for a club desperate to contend.

With Rhys Hoskins at first and their new big-ticket addition at third, the Phillies have no room for Bohm, who gives the Rockies a replacement for Arenado at the hot corner. Additionally, Colorado takes a chance on Medina, a former top-100 prospect whose stock has dropped.

Who says no? The Phillies. General manager Matt Klentak said he expects Bohm to contribute at some point in 2020. In the meantime, Scott Kingery can handle third base, with Segura at second and new addition Didi Gregorius at shortstop.  [MLB.com]

For as good as Bohm could be, Arenado already is about as good as the Phillies could ever hope for.

Over the last five seasons (all of them All-Star earning), Arenado has averaged 40 homers and 124 RBI. He's won a Gold Glove in all seven of his seasons with Colorado and four Silver Slugger awards.

There likely aren't many players currently worth the high price of the Phillies' top prospect — we have previously pondered whether Kris Bryant was worth Bohm in a potential trade — but Arenado undoubtedly is.

Adding either Bryant (27) or Arenado (28) would firm up the Phillies at third base for near a decade and give them three All-Star bats in their respective primes.

Of course, the chances of the Phillies suddenly becoming this aggressive are probably pretty slim — but the pressure on Matt Klentak and the front office to field an actual contender is extremely high, and as many have no doubt surmised (including our own Hall of Fame baseball writer Paul Hagen), the Phils are not much better than they were winning 81 games last year. And even with Zach Wheeler and Didi Gregorius now on the roster, they haven't eclipsed the Braves or Nationals as favorites in the NL East.

Arenado is, and ought to be on Philadelphia's radar and atop their wish list. A blockbuster move for a player of that caliber would put the Phillies firmly in the mix alongside Atlanta and Washington, which is what the team desperately needs with 2020 fast approaching.