The Phillies' top defensive prospect has struggled at the plate, but his play in the field has opened eyes 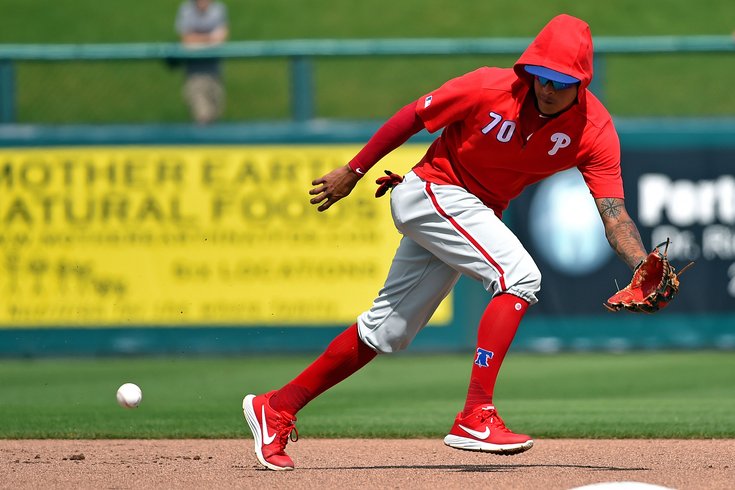 Arquimedes Gamboa will fight to make his big league dream come true in 2020.

That's the key tool that has carried the 22-year-old Venezuelan from Guiria, a small costal port city known more for playing cricket than baseball, to the cusp of being a Major League Baseball player.

The Phillies have had Gamboa on their 40-man roster for some time now, but the infielder — a constant name on any top prospect list — has been unable to break through.

It's not as if there weren't opportunities. The Phillies cycled through Brad Miller, Logan Morrison, Jose Pirela, Phil Gosselin and Sean Rodriguez last season, while Gamboa was in the minors, a phone call away from being in The Show.

Why didn't they give him a chance? Well, for starters, they don't trust his bat.

In his first big-league spring training in 2019, Gamboa had one hit in 10 chances and didn't do much to squash concerns. In Reading last season, Gamboa played 118 games and hit just .188. (though he did have an impressive 21 stolen bases).

"I had a tough experience last year but I was excited because it was my first year in big-league camp," Gamboa said last week as he visited Philly with other spring training invitees. "This year I am more comfortable. I know who the pitchers are on the team and I just want to work on my mechanics this year. I want to get to the big leagues this year."

To get to the big leagues, he'll need to show he's got a handle on the learning curve that is minor league baseball.

"Gamboa and I have been together every single year, it's been pretty cool to be able to watch him grow," another Phils' prospect, Lucas Williams, said.

His defense is too tantalizing to pass up. If his bat cooperates, he could achieve that goal. MLB.com listed him as the organization's best defender:

Like many young shortstops, Gamboa had shown flashes of brilliance defensively, but also inconsistency. He ironed out a lot of those wrinkles in 2019, still making the flashy plays with his plus range and strong arm, but without as many lapses along the way.  [MLB.com]

"I play shortstop, but I can play second base too, and third base, I played centerfield last year in Reading, I think I can play anywhere," Gamboa said. "I love playing defense. I just want to keep working but I know I have to learn a couple things about my mechanics."

It seems realistic to expect Gamboa — who was signed as a 17-year-old five years ago — to begin the year in Triple-A and be available as an injury replacement for any key Phillies' position player (a cheap one, for a team up against the luxury tax threshold). Making the 26-man roster would require him to flash a big improvement as a hitter, a talent he has never truly shown he has. Though effective in spurts, his career average over more than 1,400 at bats is a meager .213, just hovering above the Mendoza line.

But there is no lack of desire.

"It's my dream — I just want to get to the big leagues this year," he said. "I think I feel ready for that step."

Gamboa has a lot more to play for than just his own baseball aspirations. His family, far away in South America, are his inspiration, and he dreams that one day, perhaps if he makes enough money to improve their situation, they could actually see him play professional baseball in person.

"In my country, the situation, I hope so someday somebody can come [watch me in] the big leagues," he said, shielding some emotion. "I just want to call my mom and my dad, to tell them if they can come, to just do it. I love my family, I love my son, my dad, my mom, my sisters."

The Phillies are pulling for Gamboa just as much as his family is. He'll have a huge opportunity in his second MLB spring training next month in Clearwater.

With a name that's hard to forget — and a story that's hard not to root for — Gamboa is a player to keep an eye on.