Which starters will fill out the Phillies' 2020 rotation? 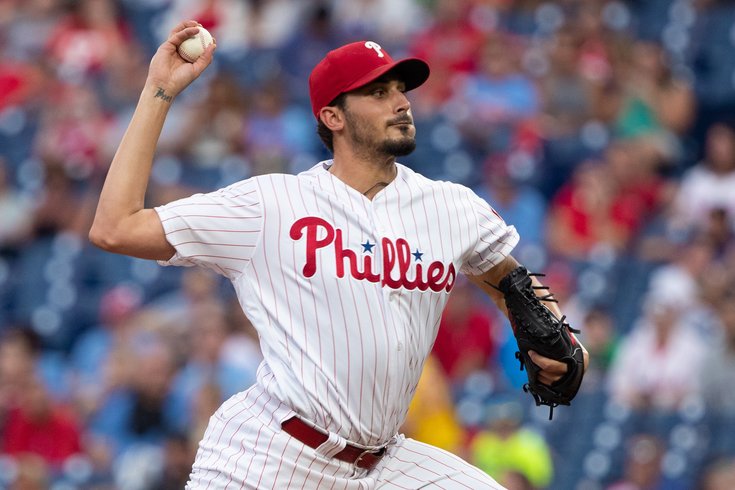 The Phillies have a top-heavy rotation. They did last year, and they did the year before that.

And in those previous seasons, it's been pretty clear that getting something (anything) consistent from those final few rotation spots could be the difference between a mediocre team and a postseason one.

Aaron Nola is Philly's ace, with newly signed Zack Wheeler the team's bonafide No. 2. And even though he's battled injuries and is on the wrong side of 30, Jake Arrieta is locked in as the Phillies No. 3.

After that, well, it's one question mark after another.

The Phillies went into last year giving their young unproven starters a vote of confidence, one that was not shown to be a smart move as eight different hurlers would wind up taking the mound to start a game and none of them had an ERA under 4.45 (the mark posted by Drew Smyly. The next best ERA from a bottom-of-the-rotation starter was 5.37).

Nick Pivetta, Zach Eflin, Jerad Eickhoff and Vince Velasquez were not up to the task as middling veterans like Smyly and Jason Vargas were brought in to try and sturdy the ship.

The team is no doubt hoping to avoid a repeat performance in 2020. Two starting spots are pretty much up for grabs in spring training. Here's a look at the competition and who we think has the best chance of making the staff:

Just 25, Eflin is a former first-round pick and there is no reason to be skeptical of his talent. Baseball Reference projects another 10-win, mid-4 ERA season and that sounds like a worst case. He has the potential to be even better than that and to earn the role going forward as he looks to solidify himself as a big leaguer.

Medina has been a top 100 prospect in baseball for three seasons now, and the timing has never been better for the 23-year-old to show he's been worthy of the hype. Though he had a down season in Double-A last year, Medina has shown he has the talent to pitch in the big leagues. He will be in spring training camp and his presence on the 40-man roster means Philly is ready to give him a real shot.

A good showing in March may be enough to propel Medina into the rotation to start the year...

...unless he gets out-pitched by Howard. Rated by many as the Phillies' overall No. 1 or No. 2 prospect, Howard burst onto the scene last season as he mowed through minor league hitters in just his second full pro season. His 2019 numbers:

All of this after going 11-2 with a 3.40 ERA in two seasons in college at Cal. He has just 211.1 innings of pro pitching on his resume, giving an argument that the 23-year-old might be better served with some experience in Triple-A to start the year. But the Phillies brass can surely be convinced he's ready by a strong spring showing.

Pivetta is an enigma and has shown alternatively incredible talent paired with a frustrating lack of consistency. The 26-year-old may be getting his last chance with the Phillies organization, and his talents may actually be better served as a reliever. Look for him to potentially earn a spot as the long-man in the bullpen and be a candidate to make a few spot starts during the year, if necessary.

The list of pitchers left isn't particularly impressive, but there are a few established arms that may warrant a look in spring training.

• Ervin Santana had a ridiculous five complete games in an All-Star campaign three seasons ago. In the two years since he's started just eight times.

• Drew Smyly and Jason Vargas are each still available as free agents after solid but less than eye-popping performances with the Phils last season.

That's really it unless the team explore the trade market — unlikely this late in the offseason.

Vince Velasquez is sixth on our list of starting options because of his likely usefulness as a reliever. He throws hard and can strike out batters as good as anyone in the Phillies' organization but he was always a pitcher who struggled to get through multiple reps of the opposition's lineup. Velasquez has the skillset to be a great setup man out of the 'pen, and the Phillies will (hopefully) challenge him to learn that role this year.

There is an outside chance another youngster wins the fifth starting gig but it would be a surprise if they did. Enyel De Los Santos is a candidate for this as he has started for the Phillies before. Ramon Rosso, Christopher Sanchez and Damon Jones are among the spring training invitees looking to turn a high prospect ranking into a role in the big leagues, but these arms may be more likely to wind up in Philly as relievers.

"If it is a relieving role, I would be all for that," Jones told PhillyVoice last week. "I prefer starting but anything that helps me get to Philadelphia."

Irvin had a stellar debut but then fell off the planet as a Phillie last year. His left-handedness and experience in The Show could help him as a back up plan to be No. 5 on the rotation should every other option above sputter out.