If a Nolan Arenado trade is 'all but inevitable,' why aren't the Phillies interested? 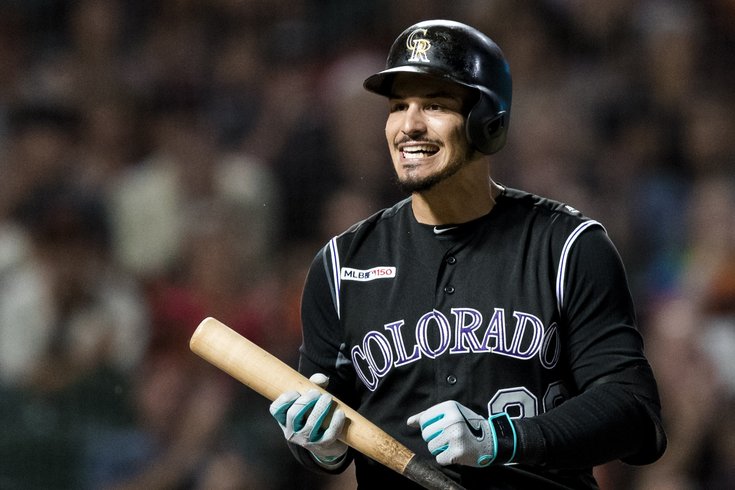 If you've followed recent events in Colorado — or even if you are vaguely familiar with them — it comes as no surprise that The Athletic's Jim Bowden is reporting that a trade of six-time All-Star and eight-time Gold Glover Nolan Arenado is "all but inevitable."

However, Phillies fans may be quite surprised to learn that the apparently available Arenado is not even on their team's radar. According to Bowden, who is simply reporting on the latest news in the ongoing saga of the superstar third baseman's unhappiness with the Rockies, believes eight teams are sensible trade partners.

None of them are from Philadelphia.

Arenado has a full no-trade clause, and will have to approve any deal. But whether they move Arenado in spring training, at the July 31 trade deadline or next offseason, it’s going to happen. The only other option would probably be for ownership to make sweeping front office changes and bring in a more aggressive baseball operations staff to shake things up and help put them in a better position to contend over the next two years and then try to convince him to stay. But at this point, that scenario is highly unlikely.

Realistically, there are approximately eight teams that could make sense as a trade partner for the Rockies due to either prospect inventory, a team’s need at third base or the financial wherewithal to take on his enormous contract. The Yankees, Astros and Rangers are the only American League teams that could make a feasible trade. In the National League, the Braves, Dodgers, Cardinals, Nationals and Cubs appear to be possible matches. [The Athletic]

It's an interesting take, to say that the Phillies lack prospects, a need at third base and financial maneuverability. Last we checked, the team had all three in spades.

Here's why the Phillies are either chickening out, or Bowden completely forgot to mention a team that could and should be a key player for Arenado's services.

Not only do the Phillies have three of the top 100 prospects in Major League Baseball (according to MLB Pipeline), but two of those, Alec Bohm and Bryson Stott, play third base — Arenado's position. The Rockies could theoretically fill the void in their rebuilding club immediately with a young and talented prospect (Bohm was ranked as the top third base prospect in baseball). And the Phillies would be silly to pass on a swap of the unknown of Bohm or Stott for the sure thing of one of the best players in baseball, in the middle of his prime at age 28. Can you imagine having Arenado, Bryce Harper and J.T. Realmuto all together for the primes of their careers?

Philadelphia's other top three prospect is hurler Spencer Howard. The team also has a bevy of other up-and-coming young ballplayers in former No. 1 overall pick Mickey Moniak and former top pitching prospect Adonis Medina. There is no doubt the Phillies have the "inventory" required to get the Rockies interested. They are just choosing not to — a conservative approach that will only prove to be worthwhile if their top young players make a short term impact by making the team and contributing this season.

Need at third base

Scott Kingery, a utility man whose natural position is second base, is likely to start the year at the hot corner. He has only 45 career starts there. Jean Segura has none, while Didi Gregorious has exactly one. Their three infielders have not proven they can play consistently at third while the Phils' bench options leave a lot to be desired if given starting roles.

Moreover, the simple fact that both the Nationals and the Braves, each expected to once again finish ahead of the Phillies in the NL East, are on the hunt for Arenado should sound alarm bells. Facing off against the career .295 hitter, who slammed 41 homers last year, 18 times per season is not exactly a comforting thought. This surely increases the team's need at third base. The team could be sending a strong signal that Bohm, just 23 and with no experience above Double-A, is their franchise third baseman. Anything short of that panning out would make it a wrong decision to pass over Arenado.

The Phillies are admittedly close to the luxury tax threshold right now, with just $5 million in clearance before the team would be required to pay a tax for every dollar spent. However, even if the team is determined to stay underneath the $208 million mark (an arbitrary number, by the way, that an aggressive and seriously contending team should be comfortably exceeding), the team would only have to pay the tax with Arenado's $35 million AAV for one season — and most of it at a pretty low tax rate.

Here's what our columnist Kevin Cooney said earlier this winter:

In actuality, however, the tax doesn’t get really punitive until you get to the $228 million threshold. Up until that point, it is 20 percent for every dollar a team goes over the figure. So if the Phillies went to $219 million in payroll as a first time tax offender, the tax would roughly be $2.2 million.

Even if they went to $227 million, the tax is “only” $3.8 million. In real life money, that’s a lot. For a team that has the resources at its disposal the way that Philadelphia does, it actually isn’t all that much. The kicker is a 12 percent surtax that goes when you go between $20 and $40 million over the tax. If you go over the tax by 40 million, it goes to 42.5 percent – effectively acting as a salary cap with nobody in their right mind doing it.

In other words, there is a limit of sanity of what the Phillies should spend. That limit should be $228 million.

It's clear that Arenado has a perfect landing spot in Philadelphia. The third baseman's full opt-out clause in 2022 could be a sore spot, but if the Phillies are committed to contending, he could certainly be made to feel at home here. Whether or not the team will take advantage of the rare availability of one of the best players in all of baseball is yet to be seen — but if they cop out due to a lack of prospects, 3B need or financial flexibility, well, they're just being chicken.