MLB rumors: What to make of the dueling reports regarding J.T. Realmuto, Phillies 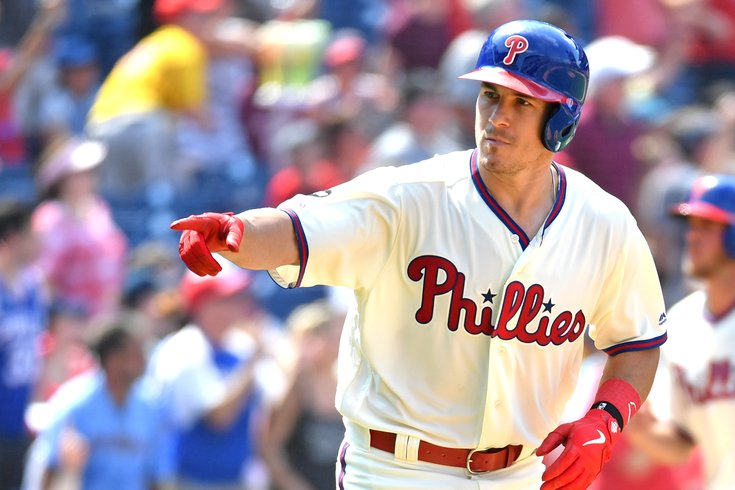 Just a week after a report from a national writer first suggested that the Phillies had an offer on the table for free agent catcher J.T. Realmuto, a local reporter has come out and refuted it, saying the team has not yet made an official offer.

According to NBC Sports Philadelphia's John Clark, the Phillies are "playing the long game" with the star catcher, who has reportedly been seeking the biggest contract at his position in MLB history (Joe Mauer's $23 million per year is the benchmark).

The source said the Phillies have expressed interest in Realmuto, their star free agent, and have had conversations but no official offer has ever been made.

It seems the Phillies are playing the long game to see where Realmuto’s market goes.  [nbcsports.com]

That report is in direct contrast to John Heyman's report from last week that said the Phillies "have an offer on the table" for the 29-year-old backstop.

The Phillies have an offer on the table for J.T. Realmuto but the other offers for baseball’s best all-around catcher remain unknown #mysterymarket

Heyman followed that up on Monday with another report that the Phillies have an offer out.

JT Realmuto remains a/the priority for the Phillies with the new regime. They have an offer out to him but like with the other big free agents it might be a waiting game.

A day later, Clark's report said precisely the opposite, and although he's just a local report and may not be as plugged in around baseball as Heyman (this is not a shot at Clark, it's just a fact), he got a ringing endorsement from one of the biggest national baseball writers.

John is a great reporter. So when he says this unequivocally that the #Phillies have never made Realmuto an offer, you can be sure he took great pains to nail this down. https://t.co/goelrZZbvu

The Phillies, like much of Major League Baseball, have been very quiet this offseason, with their biggest moves being the front office additions of president Dave Dombrowski and general manager Sam Fuld. Now, their focus should turn to a roster that's in need of major upgrades if the team hopes to contend in 2021.

Because Realmuto became a free agent, one of their biggest needs right now is at catcher — last year, they had one of the best catching situations in the league. Signing him back would be a big first step in the right direction for the club, one that would certainly placate their biggest star, Bryce Harper, who has been one of Realmuto's biggest cheerleaders throughout this process.

Many believed it was a mistake to let Realmuto hit free agency at all, with the Mets and new owner Steve Cohen appearing ready to pounce, but New York opted to go a different way and instead signed James McCann to a four-year deal (at a much lower price tag than what Realmuto is reportedly seeking). There are still other suitors, as well, although they remain largely unknown at this point.

It's hot stove season in baseball, so perhaps these contradictory reports shouldn't be that surprising. Clearly, there's some negotiating through the media going on here, with Realmuto's agent likely trying to drum up some interest to increase offers while the Phillies are trying to slow-play their hand and let the market take shape, with it hopefully decreasing the asking price for Realmuto as other teams, like the Mets, fall out of the sweepstakes.

And the fact that there's a need to clarify that there hasn't been an "official offer" might just be a matter of semantics.

It’s certainly possible there are some semantics at play. The Phils can make their comfort level known and indicate their breaking point without presenting an actual offer. Similarly, Realmuto’s agents at CAA can set general expectations without giving a firm number they need the Phillies (or another club) to meet. That said, it still registers as something of a surprise that, after nearly a year of conversations dating back to Spring Training, the Phils have apparently yet to give Realmuto the opportunity to put pen to paper.  [mlbtraderumors.com]

Realmuto is one of the top free agents on the market this offseason, and as a catcher brings a unique skillset to any team, one in which he can provide a legitimate and immediate impact both offensively and defensively.

If it's true the Phillies don't yet have an offer out to him, they might want to get one out soon. Either way, we're splitting hairs here over what constitutes an "official offer." Dombrowski has already admitted to speaking with Realmuto's agent (even though he said it was not a negotiation), so there has been some dialogue there.

But for now, it seems there's still work to be done before any sort of deal gets reached. Stay tuned...