Ranking the Phillies' strengths and weaknesses heading into 2021 season 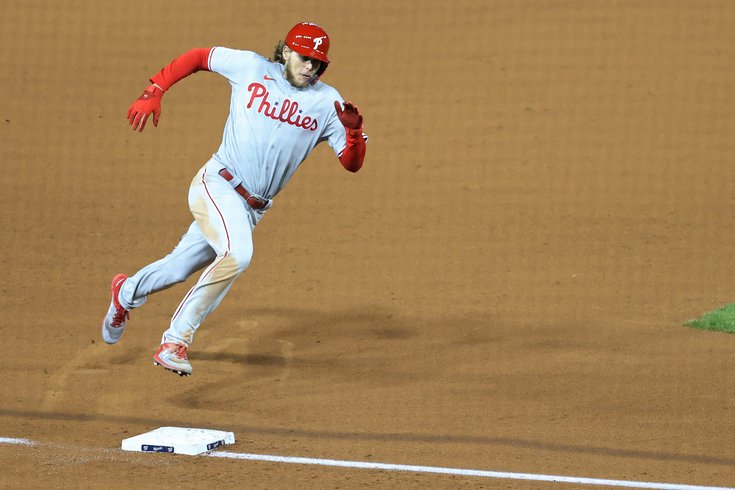 Last season, the Phillies had a really good offense, were half decent at nearly everything else, but had the worst bullpen in all of baseball and it cost them a playoff spot by just a hair.

In 2021, the Phillies are expected to field the same group of starting position players with a new starting pitcher or two, and a totally revamped bullpen. They're also (we hope) going to be playing 162 games, instead of 60. And perhaps will stay a bit healthier.

We'll be breaking down the Phils position by position as the team begins playing games in Clearwater next week. But before then, we thought it would be interesting to rank this team's strengths and weaknesses.

Here are the attributes that we expect will provide you with optimism, and the ones that will make you crazy:

Rhys Hoskins is very good at drawing walks. So is Bryce Harper. In fact, the entire offense in 2020 (which is almost identical to the one that will be on the field on April 1) was tied for 3rd in on-base percentage and had the 8th most walks last season. They also hit for average pretty well too. This will be the Phillies' key strength and strategy for winning games this season.

In the shortened campaign last summer, the Phillies produced the 9th most runners in scoring position (589 plate appearances) and turned that into the fourth most runs (227) and third most RBI (213) of any MLB team. Their RISP batting average was .278 and their 25 homers in those predicaments is the third most in baseball.

The Phillies will have the most possible success if they are able too continue these trends into 2021 — whilst also minimizing their weaknesses.

The mashing Phillies teams of the 2007-2011 era took advantage of playing in a hitter friendly park. We've been waiting for that to be a strength again for nearly a decade and the 2021 club has the chance to do just that. A year ago, they were in the top 10 in slugging, and hit a somewhat disappointing 82 homers, 11th best in baseball. They also hit fewer than the league average in doubles with just 90.

According to Fangraphs, the Phillies could have as many as six 20 home run hitters (Harper, Hoskins, Andrew McCutchen, J.T. Realmuto and Alec Bohm). They also project the Phils other two position players, Jean Segura and Scott Kingery will chip in with 28 combined homers. In 2019, their last full season, just three Phillies hitters had 20 or more homers. There is an opportunity for an elite offense in 2021.

If you make the leap of faith that the three knowns in the Phillies starting rotation, Aaron Nola, Zack Wheeler and Zach Eflin all perform close to the way they have for their entire careers up to now — and add in the potential that the fourth and fifth starters pitch better than those slots did last year — you might have a sense of optimism about what the rotation can be in 2021.

The Phillies starters in 2020 were strained, to say the least, throwing the sixth most innings in baseball as manager Joe Girardi tried desperately to avoid the worst bullpen in history. They hung tough, posting the 10th best starters ERA in the league (4.08) and the third most strikeouts. Having veterans in camp (like Chase Anderson, Matt Moore, and Ivan Nova) battling for rotation spots will definitely help, as will having Spencer Howard a year older with some MLB experience under his belt.

The Phillies have a little speed, but it's the smarts they have on the base paths that makes this area of the game a strength. One of the more underrated things a hitter can do is snag an extra base, and it's something the Phillies have excelled at in recent years.

Last season they had the 8th most stolen bases in total. But they reached base via error the second most times of any team, and had a 33% run scored average — the third best in the league (the percentage of the time a base-runner comes around to score). Philadelphia also took an extra base 45% of the time which is a solid number too. That kind of efficiency will be key again, if they can sustain it over a full season.

How much of a difference can a manager make in baseball? Well, they pick the lineup, decide when the starter should come out, and determine who and how the bullpen should pitch. But aside from pulling the right levers, they have substantially less influence over a sport than say, an NFL head coach. The Phillies have a World Series-winning manager in Girardi and he'll be taking over the Phils' clubhouse with a year more experience and knowledge, which should help.

Girardi is a manager who knows how to motivate his players, and without a designated hitter in the NL, he'll have more opportunities to be under the gun to make important decisions. Still, having Girardi calling the shots is by far a strength for this Phillies club.

The Phillies bullpen in 2020 was a flaming garbage fire. Here's how the entire bullpen was collectively in 2020:

There has been a ton of turnover. Of 29 pitchers who appeared in relief last season, just eight remain with the organization. Improving the bullpen is a priority, and turning over more than 72% of it certainly shows that the Phillies are not messing around there. They are hoping veterans like Brandon Kinzler, Tony Watson and highly-paid free agent signee Archie Bradley can make the unit a strength. We're dubious, but there is certainly no way they can be worse.

Overshadowed perhaps by the Phillies' futility out of the bullpen last year, the team also had a pretty putrid defense. And, with them running it back with their lineup, there aren't any reinforcements. According to Baseball-Reference, bad defense cost the Phillies several runs in 2020:

Advanced metrics don't look good from 2020, and according to FanGraphs, which likes to project things, the defense won't be better in 2021. Other than Realmuto and the catcher spot, every single Phillies position is projected to have a negative defensive WAR this coming year.

From a big picture perspective, having a below average defense but potent offense and pitching should not be a monumental issue. If the Phillies miss the playoffs again in 2021, it will most surely be for a reason aside from them making a handful fewer plays in the field than another team.

But perhaps if the Phils focus a little more on fundamentals they will be a little less stressful to watch — particularly if fans return to the ballpark this spring.