Phillies likely done spending (at least until the trade deadline) 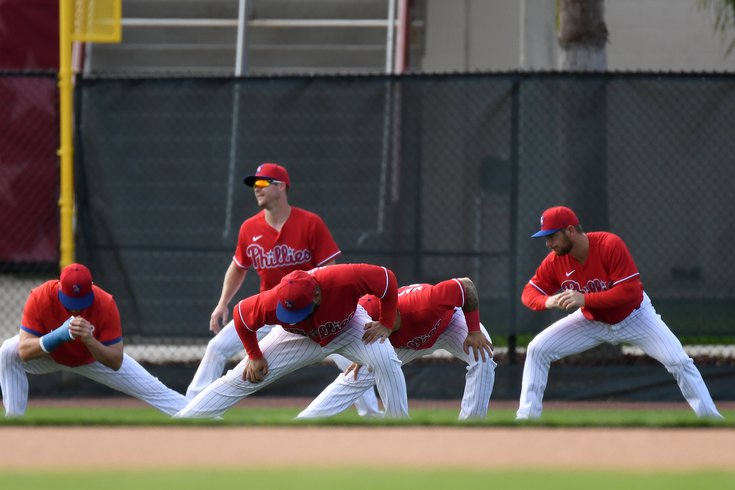 The Phillies will have some tough decisions to make as they look to balance their budget and the talent on their 26-man roster.

Ladies and gentleman, your 2021 Philadelphia Phillies.

With the squad now playing spring training games, it appears that the roster drama will be surrounding who makes the team — at the conclusion of a bevy of position battles — rather than if they will add another impact player like Jake Odorizzi or even a marginal piece.

With the luxury tax threshold set to be around $210 million, the Phillies could be a hair short of a line they are likely trying to avoid crossing — at least until they know they're contenders.

Here's more from The Athletic's Matt Gelb, who is eating, sleeping and breathing baseball in Clearwater tight now:

If the Phillies see enough from Brandon Kintzler and Tony Watson this spring to add them to the active roster, it will nudge the team’s payroll — as calculated for luxury-tax purposes — to right around last year’s number. This is why the team is done spending. For now.

Kintzler and Watson would each be guaranteed $3 million if their contracts are purchased. That would put the Phillies a tick under $208 million, which was the tax threshold in 2020. It is higher in 2021 — $210 million — so they have room to make an in-season acquisition.

The wait-and-see path is something the Phillies have followed before and it has not always gone well. But if they see an opening in the National League East come July, they could be in the market for another late-inning reliever. A few million dollars of wiggle room would permit Dave Dombrowski to be more aggressive. Maybe Dombrowski even convinces ownership to pay a tax for the first time in franchise history.  [The Athletic]

Gelb goes on to explain that there are a bunch of veterans who have "an out clause" that triggers on March 24 if they are not added to the 40-man roster. Which means the team has about three weeks to decide what to do with Kinzler, Watson, Chase Anderson, Matt Moore, Ivan Nova, Matt Joyce, Ronald Torreyes, and a handful of others.

If the team elects to go young, and punt on the above signings, it could theoretically save them some money and give them some added flexibility heading into the regular season. But, it would ultimately cost them what is likely to be much-needed depth and experience as they would risk losing their veteran signings to other teams.

What is the more likely and sensible solution roster-wise is for the team to give preference to players without minor-league options early in the season, allowing younger players to stay under team control and play every day in the minors. That means the team could start with a much older bullpen than they did in 2020 (which could be a good thing) before slowly chiseling the roster into shape as injuries and poor play gives the front office opportunities to call up younger guys.

Top draft picks like Mickey Moniak and talented arms like Connor Brogden, Adonis Medina and Spencer Howard may suffer due to a numbers game and start the year in Triple-A, but it's safe to bet that a lot of the team's top under-24 players will get a chance at some point.

The Phillies, if they retain most of their veteran signings, will then put themselves in a tight spot come the summer, as making a trade deadline deal to help the team contend could force them over the luxury tax. Or, it could cause them to balance a difficult line between selling lesser players to make room for upgrades.

If you believe what you see at sports books, you may be of the mind that the Phillies should be willing to spend more — as they have +4000 World Series odds according to Unibet, tied for the 15th best of all 30 MLB teams. They are also fourth in the NL East at +875.

But at roughly $208 million, the Phillies have spent about as much as anyone could have hoped for, and if they show they're worth the money, ownership may give Dombrowski even more money to play with. But that'll mean playing a whole heck of a lot better than they have for almost a decade.