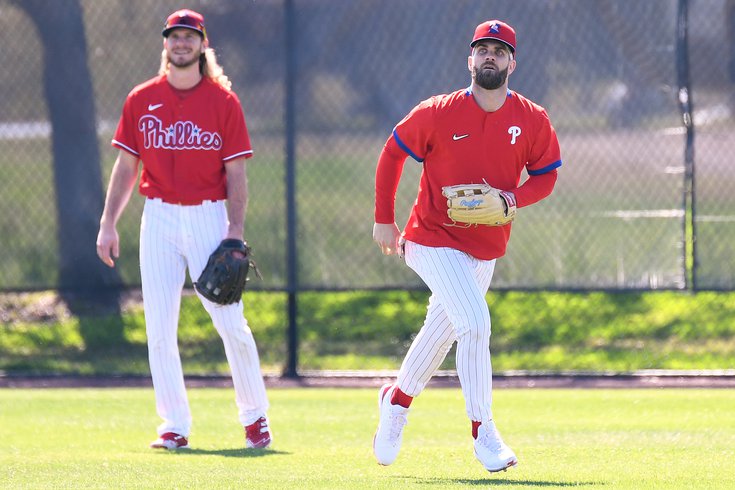 The Phillies are finally ready to hit the field for the first time since October.

The Phillies will face the Detroit Tigers to open their (modified) Grapefruit League slate Sunday afternoon, with a televised game to follow Monday on NBCSP against the Orioles (both at 1 p.m.).

And while it may seem like spring training games have snuck up on us, it's about damn time for most baseball fans.

A slow-paced offseason that had the regular season in doubt for much of it will conclude with what is expected to be a full schedule of exhibitions, albeit a limited slate of opponents and travel. The regular season is on pace to begin on time (April 1) and have a full 162-game campaign, which means teams like the Phillies will be anxiously getting players up to speed over the next month.

Before the action begins, we've compiled the 10 most important storylines to watch for this March ahead of the 2021 MLB season.

A lot of ink (or, virtual wordiness?) has been spilled blaming the Phillies' bullpen for their failure to make the playoffs last season and for good reason. The unit blew leads or allowed opponents to expand theirs while wasting solid efforts from starters — frustrating players and fans alike. Nearly the entire populace of the pen has been turned over in the last five months with a bevy of new faces in camp vying to show they can be reliable pieces for Joe Girardi's 26-man roster.

The team has brought in a stable of veteran hurlers, from Archie Bradley to Tony Watson to Brandon Kintzler to Jose Alvarado. They have relievers in their prime and some past their prime, combined with homegrown talent like Hector Neris and Connor Brogdon. All of these pitchers and more will need to make the most of their innings in spring training, as there will be fierce competition for just seven or eight spots.

The Phillies entered spring training with two key injuries — J.T. Realmuto's broken finger and Rhys Hoskins' recently surgically repaired elbow — that had many a bit worried. If the pair of hitters, each projected to bat in the top three of the order and play every day in the field, were out in April, it would have a trickle down effect that would test the Phillies newfound depth well sooner than anyone wants.

But thankfully, both players — while a bit encumbered — are working out and are expected to be ready for the season opener. Keep an eye on for them, as the sooner they appear on the field, the better it is for the overall health of the duo.

What's the plan for Spencer Howard?

In 24.1 innings during his rookie season, the Phillies top pitching prospect was less than stellar, accumulating a 5.92 ERA and spending time on the injured list. Now, working toward full health, he will be fighting for a rotation spot with Vince Velasquez, Chase Anderson, Matt Moore and others. Even if he doesn't earn the role, he may still remain in the major leagues though, Girardi explained last week.

“His performances are going to be important during spring training, but you don’t know what’s going to happen to the other guys,” Girardi told the media. “I’m open to anything. If he pitched really well and we said ‘Hey, maybe we’ll put him in the bullpen; the other guys are pitching well too and it’s one way to control his innings.’We’re not really bound to say he’s going to start or that’s it. We’re here to win, so if we have to be a little bit creative, we will be.”

Last season, COVID threw the Phillies for a loop, as they suffered a bevy of injuries and cancellations that tested their depth more than anyone could possibly have guessed. The front office decided there was no way that would be the team's undoing again, and they brought in what seems like an entire second team's worth of players with big league experience or potential. They also have a ton of players who can play many more than one position.

Here's what we mean:

If you want to read more about the depth they have fighting for a relief pitching job, we wrote about it a few days ago right here.

We touched on it in the section just above, but the Phillies have intense competitions for several roster spots, particularly in centerfield (Kingery, Quinn, Haseley), the 4th and 5th starter jobs (Moore, Anderson, Velasquez, Howard) and for the bench and bullpen. If you are a close follower of the Phillies, you'll no doubt be able to see how all of the contenders for spots on the roster fare as the team slowly trims from more than 60 players to an even 26.

Fantasy baseball experts are projecting that Bohm has the potential to be a top 10 third baseman in his sophomore season. First baseman Hoskins told media members “Kid can hit…kid can really hit…kid can play some baseball."  Catcher Realmuto showered him with praise to, proclaiming "I think he’s one of the rare guys that can hit for 25, 30 home runs but still have a high batting average and still get on base a lot.” Oh, and Archie Bradley said this.

Okay, so he can hit. But with defense at the hot corner an issue last year (and in the minors), can he be a complete player?

“The game has really just slowed down for me on that side of the ball,” Bohm said. “I’m starting to feel how the play is going to go before the ball really even gets to me. It comes with the repetition of doing things over and over again."

Will Odubel get a shot?

Probably not? The former All-Star centerfielder will be tangentially around camp, as a member of the team's "mini camp" but not as an actual member of the roster. It's possible he will get some at bats in actual games, as the team continues to pay him millions despite his domestic violence suspension two seasons ago — but it is very doubtful he will really get a chance to make the 26-man roster. But, if there are injuries or if he is absolutely lights out, you never know. It's a storyline, but one many are hoping goes away soon.

Appearing in 127 games during the 2019 season, Kingery hit .258 with 19 homers and 55 RBI. He was making good on the Phillies out of the box decision to give the super utility man a longterm deal prior to the 2018 season before he had taken a single big league at-bat. In 2020, Kingery hit .159 with just three home runs, while missing close to half of the Phillies' games.

A small sample size anomaly is clearly in play, but the other thing in play is that Kingery had COVID-19 and missed the start of last season. He never really looked like himself. It has been noted that the 26-year-old has reported to camp "slimmed down" and looking healthy. If he can hit like he did before COVID, he will be a key piece for the Phils.

No DH, no problem?

In 2020, the shortened season brought with it a first for the Phillies (and the National League) in the form of the DH, a spot in the lineup that allowed Jay Bruce, among others, to find a home on the roster. This year, at least for now, there is no designated hitter planned for the NL, which puts a little extra pressure on Girardi, who has not managed a classic NL-style baseball team since his one season with the Marlins in 2006.

It will be very interesting to see Girardi's managing style without the DH. How will he use pinch hitters? Will he make more changes in the field or less, with the pitcher's spot to deal with? Will he be less liberal with allowing starters to go deep into games? Does he like bunts? Girardi will likely be tinkering a bit in spring training which will be interesting to watch.

And finally, just how will these pro athletes be affected in the aftermath of last season's pared down 60-game schedule? Making a leap from 60 to 162 games is a big one, and players who make a living either hitting or pitching will be making necessary adjustments to get some of their longevity back.

"It's going to be a big jump from guys throwing 150 to 200 innings, to throwing 70 innings, back up to what we want, 200 innings," Nola said two weeks ago when camp began. "But I think we're ready for that. Prior to spring training, a lot of us have worked really hard to keep our bodies and arms in shape to handle that load.

"Conditioning our bodies and arms just to do that and then hitting again, I think it's going to take a couple of weeks but once we get back into the routine, I think our bodies will be in shape again."

Girardi and the Phillies coaching staff will have a lot on their plate, and making sure everyone is ready for the marathon of 162 games while ramping up properly after a weird 2020 season will be important over the next month in Clearwater.