Philadelphia's decision to allow limited fan attendance at sports venues was met with a rush of excitement this week — understandably so, after a grueling year of games with fake crowd noise and feel-good cardboard cutouts instead of fans in the stands.

But as Citizens Bank Park and the Wells Fargo Center begin welcoming spectators back, those eager to see live games need to be careful about buying up tickets being sold on secondary markets.

Numerous listings selling tickets for Phillies games surfaced this week on StubHub — MLB's official secondary market partner — despite that the team has not begun to sell tickets yet and hasn't even released a seating chart for the 8,800 fans who will be permitted at each home game.

More Phillies tickets also have appeared on other secondary ticket-selling sites, like SeatGeek.

The secondary market tickets are for sale for hundreds of dollars. For example, on Friday night two tickets for the Cardinals game at Citizens Bank Park were selling for $369 a piece for seats in the ballpark's upper deck – Row 16 of Section 428.

That's an inflated price, limited seating or not. But it raises more questions, like how how are tickets being sold on the secondary market, when the Phillies haven't started selling tickets themselves yet? The team confirmed to PhillyVoice that mobile tickets with the barcodes, which are scanned at the gates at Citizens Bank Park prior to entry, have not been issued yet, and at this point, it's not guaranteed that the seating locations described in the StubHub listings will even be included in the Phillies' socially-distanced pod layout for fans.

"We're very aware of the secondary market," John Weber, the Phillies' senior vice president of ticket operations and projects, said. "People can post whatever ... but no tickets have been transferred to StubHub via the barcode." 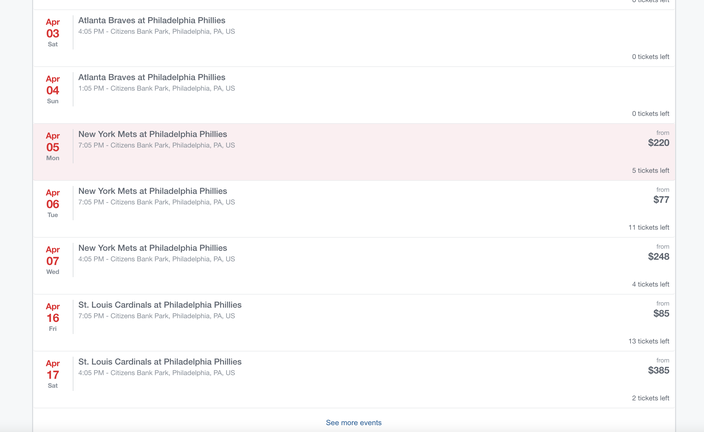 It is unknown how many of these listings resulted in sales, if any, but by Friday evening there were no longer tickets being sold for any of the games in the Mets series from April 5-7 pictured above.

The fact that these listings for Phillies games exist at all is — at best — confusing for buyers using secondary markets.

The Phillies began selling season ticket packages in December, when the organization was unsure what fan attendance might look like by the start of the 2021 season due to COVID-19 restrictions. With the team knowing that uncertainty, but still needing to prepare for the coming season, fans who purchased those packages have not yet been issued tickets with seat assignments – and more importantly – the barcodes that validate them.

Beginning next week, the approximately 10,000 Phillies season ticket holders, who have already paid the team, will have the first crack at pre-sale, single-game tickets for the first 19 home games, before the tickets go on sale to the general public on March 12.

The team is only selling tickets to the first 19 home games, at a limit of 8,800 spectators per game, which is about 20% of the ballpark's capacity. The Phillies explained they did this due to the fluidity of the situation and that the pandemic could swing occupancy limits in either direction by the time that early stretch is completed.

According to the Phillies, since the seating chart has not been announced, no secondary seller can sell tickets and guarantee the location of those seats.

Weber explained there is nothing preventing a season ticket holder from posting tickets on StubHub, or another site, and someone else could buy them.

A spokesperson for StubHub explained that the MLB partnership is managed on a team-by-team basis, which creates inevitable hiccups in the process from one organization to another. It's a byproduct of the COVID-19 pandemic across the secondary market ticket industry, which has been caught in the middle of indeterminate timelines.

"Any Phillies tickets listed on StubHub prior to March 12 are likely season ticket holders who are listing tickets based on previous years," StubHub said in a statement. "If any of these tickets are canceled because of reduced capacity or other COVID-related restrictions, buyers are covered by our FanProtect Guarantee, which ensures that they receive a new ticket of equal or better quality if possible, or a credit worth 120% of their original purchase."

Depending where they live, some buyers of invalid tickets can request a cash refund from StubHub. Customers can check with state regulators to determine whether they are eligible.

StubHub could not confirm how many Phillies tickets sold on its site have been or will need to be refunded – if any. The company did not confirm whether it plans to remove any of the listings, though the Phillies said they will continue to work on this issue with the partnership team at StubHub.

In general, the standard for the ticket re-selling industry is to allow sellers to post tickets for sale as soon as an event has been scheduled. The 2021 MLB schedule was released last July, initially without game times, and was later refined as planning advanced.

Although the games were confirmed, no tickets were ever guaranteed for specific seats due to the uncertainty of the pandemic.

"Nobody knew what our capacity was going to be," Weber said. "StubHub, they wanted to move forward with their clients. We didn't know what was going to happen. This really has to do with a moment in time where capacity was Y, and now capacity is X."

StubHub's view on this murky situation is that listings posted by season ticket holders are indeed legitimate to the extent that teams technically owe their customers the tickets they have purchased, in some form.

But when seat maps are revised to account for COVID restrictions – and only 1 in 5 tickets normally available at Citizens Bank Park are issued –  it's inevitable the tickets to many games will be canceled.

A secondary buyer, who makes a purchase now for a specific game, may not get a ticket if the seller doesn't end up with any of the 8,800 tickets available for the game in the listing on StubHub or another secondary market.

The situation has not been the same with secondary market tickets for the Philadelphia 76ers and Philadelphia Flyers. Officials with those teams said they have been in communication with season ticket holders and StubHub to avoid confusion wherever possible.

Occupancy at the Wells Fargo Center is capped at 3,100 fans, which is about 15% of the arena's capacity.

Similar to the Phillies, season ticket holders for the Sixers will have access to a pre-sale for single-game tickets starting next week. Unlike with Phillies games, there are no speculative Sixers tickets for sale on StubHub.

The Sixers have an exclusive partnership with StubHub and fans can not post tickets for sale there until they have actually purchased tickets from the pre-sale. That partnership does stop people from listing tickets for sale now on other platforms. On SeatGeek, for example, users can track upcoming Sixers home games, but there are no active ticket listings, as of publication of this article.

With a season ticket base of about 12,000 fans, the Sixers have told their customers not to assume they'll get tickets for a particular game and not to list them in advance on StubHub or any other secondary market.

The first Sixers home game with fans will be March 14 against the San Antonio Spurs.The team expects secondary-market ticket listings will quickly appear once pre-sales have taken place.

"The reason tickets haven't gone on sale yet is we have to have every configuration set and ready before we get there," a team spokesperson said. "You're not going to see Sixers tickets listed until (people) buy a seat and they know they have a seat."

None of the Philadelphia teams have published a seating chart showing how they'll handle the occupancy restrictions.

On Sunday, the Flyers will be the first of the city's pro teams to have fans in the stands when the Washington Capitals come to town. Flyers fans who are Inside Edge members with the club got first shot at buying tickets. For everyone else, the team has created a priority waiting list to facilitate buying tickets directly from the Flyers, whenever possible.

"We know that with significant demand for Flyers tickets, some of those tickets are going to end up on the secondary market," said Mike Shane, chief business officer for the Flyers. "There's not much we can do to control that, but we do have a partnership with StubHub to ensure that any Flyers tickets sold there are legitimate. The best way to buy tickets this year is directly through the team, either by signing up to become an Inside Edge member or by signing up for the priority waiting list."

The Flyers said their partnership with StubHub maintains seating pods of two to four people that can't be broken up when sold on the site. While the team has not raised ticket prices, there is nothing they can do to limit prices on the secondary market.

All three teams encourage fans to use StubHub to sell and buy tickets, as opposed to other platforms, since they each have a relationship with the company and believe it is the safest option.

The Phillies are the only team whose tickets are appearing for sale on StubHub before the team has issued them. And until tickets are issued, buying secondary market Phillies tickets might wind up being a headache. That's a risk some buyers may be willing to take, knowing they can get a StubHub credit at worst and a replacement ticket for the same game at best.

Without a seating chart to check listings against these first 19 Phillies games, it may just be safer to wait until March 12 or after to buy tickets. The only seating information made available at this time is that fans will be socially distanced in pods consisting of between two and six seats. The overall seating arrangements will remain relatively consistent from game to game, but even season ticket holders likely will not have the same seats from game to game, Weber said.

Of course, the ideal place to buy tickets would be directly from the Phillies website. It's not clear yet how many will be left over for the general public on March 12 following the pre-sale.

In about two weeks, many of the secondary market processes will likely be functioning more smoothly. And that's really when things will get interesting.

How much will Philadelphia's passionate fans be willing to pay to shake off the funk of the pandemic? How high will prices go? How safe will fans feel returning to the stands?