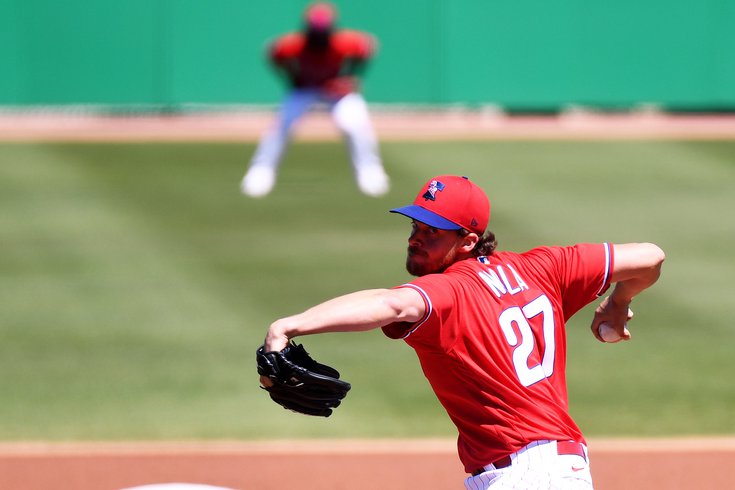 Let's take a look at the starting rotation...

The Phillies' starting five is set, as the team elected to bring in a pair of veteran hurlers with good track records on one-year prove it deals. Matt Moore and Chase Anderson will join a rotation with two legitimate Cy Young candidates in Aaron Nola (currently tied for fifth in NL Cy Young odds, via PA.Unibet.com) and Zack Wheeler (tied for 19th) and a player who the Phillies hope is a rising star in Zach Eflin (who is expected to be healthy to make his first start).

Here's a look at the projected starting pitching rotation for 2021:

Last season, with the above trio alongside Vince Velasquez, Jake Arrieta and a little bit of Spencer Howard, the Phillies starting rotation combined to produce 5.2 WAR over the shortened 60-game season. That number was the second best wins above replacement level of any rotation in the majors in 2020.

While the stats above may not be eye-popping, the Phillies have the kind of offense that can really do a lot with a rotation that keeps games within reach. If the pitching staff cumulatively can keep an ERA somewhere in the high 3's or low 4's, the team should be able to collect a lot of wins. They've also learned — a lot — from mistakes on the roster last season.

In bringing in Moore, who pitched dazzlingly well in Japan last year, and Anderson, who has a 3.38 ERA in three spring starts and is looking like his old self, the Phillies were able to stretch their previously thin pitching reserves much farther. Last year, with COVID raging through MLB (and the country), the Phillies were forced thrice to rely on bullpen games — which unsurprisingly did not go well. They also threw rookies like Howard, Adonis Medina and Ramon Rosso into the fire perhaps a bit prematurely as their production was pretty bad last year as well.

This year, thanks to new front office exec Dave Dombrowski, the Phils will have Velasquez ready to go as a sixth starting option and top prospects like Howard and Medina more fresh and confident after some time spent in Triple-A.

The rotation may not repeat as the second best (by WAR) in the big leagues again in 2021, but they certainly will not be a weakness for the team as they have arms with proven abilities to win up and down the rotation.

The Phillies have a strong rotation, but depending on who you ask, it may be the worst in a loaded NL East. According to Bleacher Report, here's how the divisions' rotations shake out among the 30 MLB teams:

Either way, the Phillies' hitters are at a disadvantage playing where they play. Here's a brief look around the division:

Aside from the inevitable (eventual) impact of Father Time — Scherzer is 36, Lester is 37 and Strasburg is 32 — the Nationals once again bring to the table probably the most talented rotation in the NL East and potentially the NL (though the Dodgers and Padres are right up there). The Phillies know all of these pitchers well from facing them with Washington or at previous stops, and it will certainly be a battle every single time a team tries to crack this quintet.

The Mets had an on-paper rotation that was rock solid last season, but it didn't pan out. With just two hurlers returning to the staff in 2021, New York has some question marks at the bottom of the rotation. With newly acquired Carlos Carrasco nursing a hamstring injury, David Peterson is expected to start in the No. 4 spot. There appears to be an open competition for the final slot, between Jordan Yamamoto and Joey Lucchesi. DeGrom is the NL Cy Young favorite at +425, according to PA.Unibet.com.

Fried and Soroka (returning from an ankle injury and expected to miss a few starts) are the two aces atop this rotation, with veteran Morton a very solid No. 3. The Braves have some depth as well with Kyle Wright in the No. 6 slot in case he is needed. Atlanta once again has a very strong pitching staff up and down and it should be a strength this year.

If you've only ever heard of one of these starters, former Phillies prospect Sixto Sanchez, you're not alone. Every single one of these pitchers is 26 or younger, and the Marlins are truly embracing youth as they look to build on a surprise playoff berth from a season ago. And many expect this rotation to play better than expectations.

The Phillies have some real talent in the minors right now when it comes to starting pitching — in fact each of their top three prospects, according to FanGraphs, is a starter. It's perhaps the biggest strength they have in their farm system. Which is good news, as the one-year deals they shelled out to Moore and Anderson are expiring next season, as well as Velasquez' team control, which opens up at least two starting roles for 2022.

And while bringing in a big-name free agent or trading for an arm is always possible — there are a bevy of players on soon-to-be-expiring deals who are excellent pitchers, like Trevor Bauer, Clayton Kershaw, Zach Grienke, Justin Verlander and others — they are well on the other side of 30.

Ideally one of these home grown options will have a strong showing in the minor leagues this year and earn a role in 2022:

Howard was disappointing making his MLB debut in what was a very weird 2020 season, and played through an injured shoulder. When his fastball is back in the high 90s, he has four pitches that can miss bats and he still projects as the Phillies' top prospect — one who could get another opportunity sometime very soon.

Abel was the Phillies' top choice in last year's draft straight out of high school and he is already near the top of prospect rankings across the baseball world. The lanky right-hander can throw 97 mph and if his secondary pitches pan out, he could be a future big league ace.

Morales is on the Phillies 40-man roster, which shows you how close they think he is to breaking through. The Venezuelan was a starter for most of his minor league career but does have the kind of stuff to make him a dominant closer, should the team decide to move him to the bullpen.

Finally, an impact lefty. Miller has excellent secondary stuff and a plus fastball, and if he shines in Triple-A this year he could find himself in competition for a starting role sometime soon.

Falter is another lefty who apparently really impressed during instructional time in 2020, with the minor league suspended. It will be interesting to see if his talent translates to game action this summer.

The Phillies also have youthful depth waiting for an opportunity in players like JoJo Romero, Medina, Rosso and others.