Phillies positional preview: Alec Bohm has sky-high potential (and expectations) at third base 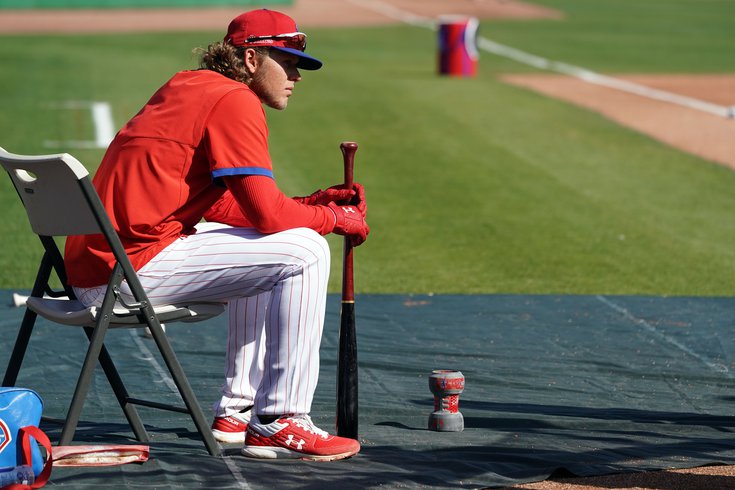 Let's take a look at third base...

The Phillies got a rare treat in 2020 — their top prospect played better than expected.

Alec Bohm hit .338 last year in 44 games, and has already shown in his young pro career that he can hit for average and get on base (at a .400 clip). The 24-year-old infielder was the runner-up for NL Rookie of the Year in the shortened campaign a year ago, and played three positions (third base, first base and DH). Without a DH spot and with Rhys Hoskins fully healthy at first, Bohm will need to take a step forward defensively in his sophomore season.

Manning third base, Bohm will need to show he can be an everyday MLB-caliber defender, fighting off suggestions that he is ultimately bound to be an offense-first first baseman. Bohm came into spring training feeling confident and determined to show his home is at third.

“The game has really just slowed down for me on that side of the ball,” Bohm told reporters back when spring training began. “I’m starting to feel how the play is going to go before the ball really even gets to me. It comes with the repetition of doing things over and over again. I definitely feel light-years ahead of where I was [coming out of college]. The staff is out there every minute I’m out there and they’ve done so much to help me ... but there’s still more to be done.”

The former first-round pick, despite having 54 hits in those 44 rookie games, only smacked four homers and drove in a relatively lackluster 23 runs, numbers that would translate to roughly 12 homers and 70 RBI over a full season. In 165 minor league games, Bohm hit 21 homers and 97 RBI — which are the kind of power numbers the Phils are expecting from him in the big leagues as well.

The first thing you'll no doubt notice when peering at our third base table below is that the position seems to be extremely young across the NL East, with Mets veteran Jeff McNeil the oldest hot corner starter at the ripe old age of 28. The Phillies, Braves and Nationals are all turning things over to respective top hitting prospects, with the Marlins content to bring back the moderately productive Brian Anderson. It is hard to make much of the previous season stats from the youngsters below, as they'll each be getting their first full tastes of a 162-game slate.

A look at the numbers:

The future is Bohm's. He is 24 and under team control (including three arbitration seasons) through the 2026 season, when he will turn 29 years old. If Bohm plays as well as many hope, the Phillies could chose to avoid him hitting free agency by giving him a contract extension before 2026.

There is, of course, a chance that Hoskins winds up losing his job at first base to Bohm. If that happened, a spot at third would open up. None of the Phillies top current prospects play third base, and it would be a stretch to expect any of their top middle infielders like Bryson Stott or Luis Garcia to make the swap. But it is possible if one of their farm hands winds up playing well enough to get a chance to start in the majors.

The more fun scenario to imagine, with the Phillies set to have a little luxury tax space in 2022 with somewhere between $20 and 35 million expected to come off the books, is that the Phils move Bohm to first and add a big free agent piece to play third. Kris Bryant, Nolan Arenado and Kyle Seager could become free agents next offseason, while shortstops Francisco Lindor, Trevor Story, Carlos Correa, Javier Baez and others also potentially hitting the open market.

The option of adding one of those guys as rental players (and extending them later) at the trade deadline is probably a pipe dream, due to the Phillies current expense report being very close to the tax threshold.

However, if a handful of these infielders make it to free agency after the 2021 season, it could be another fun offseason for Phillies fans as John Middleton and the rest of the Phils ownership will have one last chance to make a push toward building a true contender.