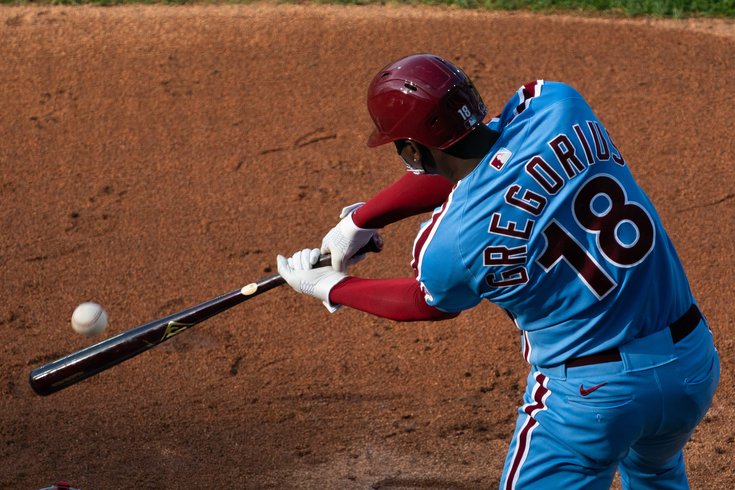 Didi Gregorius will be in Philly until at least 2022.

Let's take a look at shortstop...

Last year in this space, we asked if Didi Gregorius was anything more than a simple stopgap at shortstop, as they had some talented prospects who play shortstop and the former Yankee inked a one-year prove-it deal.

After a slow-moving offseason, at the last minute the Phillies conceded that Gregorius did indeed prove it, extending him with a two-year, $28 million contract. He was one of the Phils' most reliable and productive players during the abbreviated 60-game season in 2020:

Okay, maybe the Phillies are getting a steal. That's a .284 batting average, 27 homers, 108 RBI and 92 runs scored extrapolated over a typical 162-game season.

Gregorius' defense is fine, but he has shown he has the potential to put up All-Star caliber numbers at the plate — and stay healthy — two things that will keep him hitting in the heart of the order for Joe Girardi in 2021. The Phillies need production from this premium position, and here's why...

Francisco Lindor certainly changes things on the below table when compared to last year's shortstop outlook. The Mets' prized acquisition is four years younger than Gregorius, but has a career WAR 10 points higher. He's a four-time All-Star and perennial MVP candidate and is probably the most talented player who plays short in the NL East. Interestingly, the other four teams in the division got spectacular play from their everyday shortstops in 2020, and all four are returning for 2021.

The Nationals' Turner was an MVP candidate last season and as such is ranked by FantasyPros as the second best shortstop in fantasy (behind Fernando Tatis Jr.), with Lindor listed in fourth. Swanson is 13th and Gregorius is 17th.

Four of the Phillies current top 16 prospects play shortstop — but the fact that the Phils were comfortable signing Gregorius for two more seasons tells you everything you need to know about their readiness to take the next step.

Stott was a first round pick a few years ago who got a spring training invite, but he's struggled to show much against big league pitching and will be relegated to Double- or Triple-A to hone his craft this spring and summer. One has to wonder how much the lack of a 2020 minor league season stunted his development.

After having an insanely impressive year at the age of 18, Garcia may have been pushed or touted to soon before dropping way off in 2019 and then missing all of 2020 due to the pandemic cancelling the minors. He is a bit undersized and stocky, plays solid defense but currently projects as a depth or utility player in the majors. A good showing in Double-A this year could change that.

Martin is a gifted infielder drafted in 2020 who could be a quick study and jump to the majors relatively quickly. Many expect him to be moved to second or third, but he will need to show he can play consistent defense and hit at the pro level before he's considered a real option for the Phillies going forward.

At 24, Maton is close to being big league ready and got a spring invite, but was sent to the minors last week where he will start his 2021 season. Maton can be a backup infielder this season with an injury to a key player.

As you can see, there is depth but few studs. Perhaps that will change by the time Gregorius' time in Philly is through.