Phillies season preview: Can Didi Gregorius be anything other than a stopgap at shortstop? 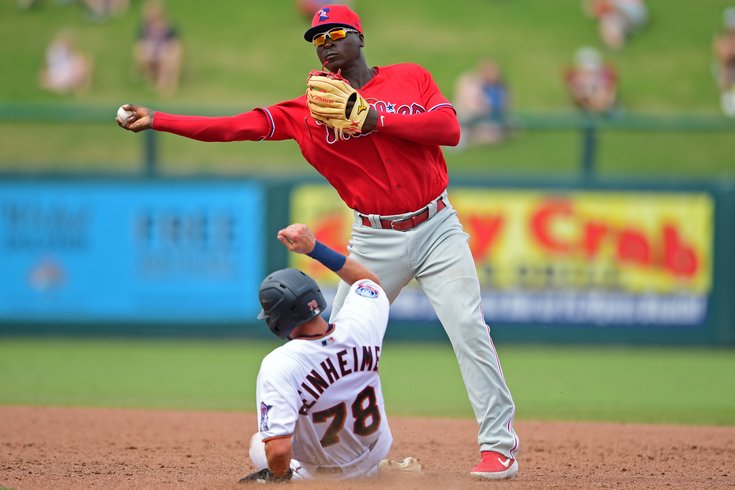 Didi Gregorius may be nothing more than a one-year rental for the Phillies.

Let's take a look at shortstop...

Didi Gregorius is already showing he is a good fit in Philly.

At least off the field.

In his brief time as a Phillies player since signing a one-year, $14 million deal a few months ago, the 30-year-old has shared his thoughts with the media on the Astros cheating scandal, on baseball's "absurd" playoff expansion plan, on how to expand the reach of the game (he says lower ticket prices and no blackout restrictions) and on his love of photography.

Phillies fans are suckers for athletes with personality and who can give a good soundbite. But they are even bigger suckers for players who can perform on the field. Can Gregorius make good on his "prove it" contract?

Before last season, Gregorius had started at least 134 games in four straight seasons, providing a combination of power and reliability at the plate. Last season, his fifth and final with the Yankees (where he took over in 2015 to replace Hall of Fame shortstop Derek Jeter), he only played half the season due to an elbow injury that he later had surgery on. He missed the first half of the year and hit .238, his lowest rate since 2014 when he was still a prospect.

Here's a look at his numbers as a Yankee:

Though his batting average may have been up and down, it's clear Gregorius' power numbers were surging upward as a Yankee. His home run and slugging percentage increased every single year — with his pace in 2019 in line to set a career high in homers and RBI.

Gregorius is rejoining former manager Joe Girardi in Philly, and is confident he can return to his past form.

“Yeah, why wouldn’t I be [confident]?” he asked reporters a few weeks ago.

There is no true superstar shortstop in the NL East, though the Mets (Amed Rosasio) and Nationals (Trea Turner) each have potential All-Star talent at the front end of their primes slated to start in 2020.

The Phillies, in Gregorius, perhaps have the player with the best track record (and highest career WAR) as the Braves look for Dansby Swanson to take a step forward this year. Miami will rely on veteran Miguel Rojas to begin the year.

It's very possible that Gregorius, if healthy all year, can have the most home runs and RBI of any shortstop in the division.

We'll start with the players on the active roster. As we mentioned, Gregorius will be a free agent by season's end. Whether the Phillies will want to commit to him at age 31 depends on his performance in 2020. They also have two players who are very comfortable at short under contract for years to come in Scott Kingery and Jean Segura.

If Alec Bohm, the team's top offensive prospect, finds a home at third base in the longterm, Gregorius could prove simply to be a one-year rental at short.

Behind the players in spring training, there are a few noteworthy shortstop prospects highly regarded in the farm system. The most notable of these is Bryson Stott, last year's first-round pick. Here's what The Athletic's Keith Law had to say on Stott — who he ranks as the team's No. 3 prospect — Tuesday:

Their first-round pick last year, Stott is an above-average to plus defender at short with power but length to his swing that’s going to lead to a lot of swing and miss, especially as he gets to the higher levels. He’s very rangy and moves well to both directions with the arm strength to make the play from the hole. [The Athletic]

At No. 4 on Law's list is SS Luis Garcia, a very talented but still inexperienced prospect who they will certainly not be rushing to the majors anytime soon. Jonathan Guzman, also still in Single-A, is the third shortstop in the Top 10.