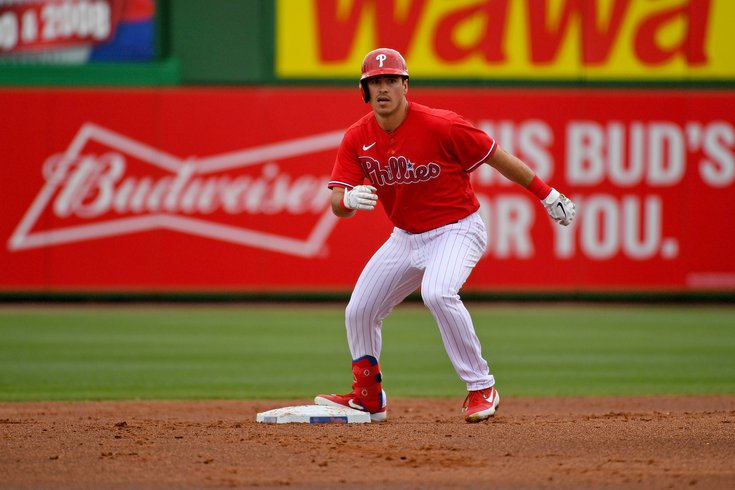 Will Adam Haseley make it as the centerfielder for the Phillies for the entire season?

Let's take a look at centerfield...

In each of the past five seasons, the Phillies opening day centerfielder was Odubel Herrera.

We won't waste time recapping Herrera's woes — both on and off the field — but the one-time mainstay has been designated for assignment and his future is unknown. In his absence, the Phillies gave one of their top prospects a chance, and as we'll explore in just a bit, Adam Haseley has both made good on the promise of being a first round pick, but has a lot of room to grow.

Haseley likely has a short leash right now, with prospects and veterans alike looking to take his job. But for the time being, there's no reason to question who the starter will be on March 26.

Haseley's rookie year had ups and downs and (like pretty much every other Phillie) some injury issues. In the 67 games he did play, the 23-year-old hit .266 with five homers and 26 RBI — a very small sample size. Here's a little more data from his minor league and college days:

First of all, as you can see, Haseley raked at the University of Virginia, earning his first-round pick status. He's also never been an elite for-average or power hitter (aside from at UVA of course), and seems like he'll project as a hitter who at his best can hover under .300 and chip in low double digit homers.

Is that enough for the Phillies in center long term? Herrera's career numbers, .276, 15 HR and 60 RBI per year mirror about the production one could expect from Haseley.

It also bears mentioning that the Phillies will enter the 2020 season with some depth in the outfield. Speedster Roman Quinn and power hitting Jay Bruce will be on the roster, with Nick Williams looking to make the squad out of spring training as well. Scott Kingery, who played a lot of outfield last year, could find himself displaced from the infield if Alec Bohm is promoted to play third base.

All of this could take big chunks of at bats out of Haseley's season. Don't be surprised to see a variety of different outfield looks from Joe Girardi's lineups this season.

It's really interesting to look at the centerfielders projected to start in the NL East, as none (besides perhaps the Nationals) seems to have an established and reliable option. Four of the five teams are looking for a former top prospect to perform at the next level — the Phils with Haseley, the Marlins with Lewis Brinson, the Mets with Brandon Nimmo and the Nats with Victor Robles. The Braves look like they'll open the season with veteran Ender Inciarte manning center.

Here's a closer look around the division:

There is no reason to doubt that Haseley has the potential to emerge as the best of his peers but as of right now, there doesn't appear to be a team with a clear CF advantage.

Haseley is under team control for the foreseeable future as he was a rookie last year. There are two main contenders behind him in the farm system: former first overall pick Mickey Moniak and up-and-comer Simon Muzziotti.

Moniak is still young and has room to grow — though he has performed far from how a first overall pick would be expected to with four years of pro experience. He is in spring training and has a chance to make an impact this year.

Muzziotti is a 21-year-old Venezuelan and has seemingly come out of nowhere. He's ranked by Keith Law as the Athletic as Philly's No. 6 overall prospect:

Muzziotti has four of the tools now and might grow into the fifth, power; he can really put the bat on the ball, striking out just 12.9 percent of the time last year even as one of the youngest players in the Florida State League. He’s a 65 runner and plays plus defense right now in center. His contact tends to be hard but on the ground or just at a low angle, so, while there’s power potential in his frame, he’s going to have to lift his swing to get to it. I think he can be a regular even without much power because of his speed, defense and how rarely he swings and misses.  [The Athletic]