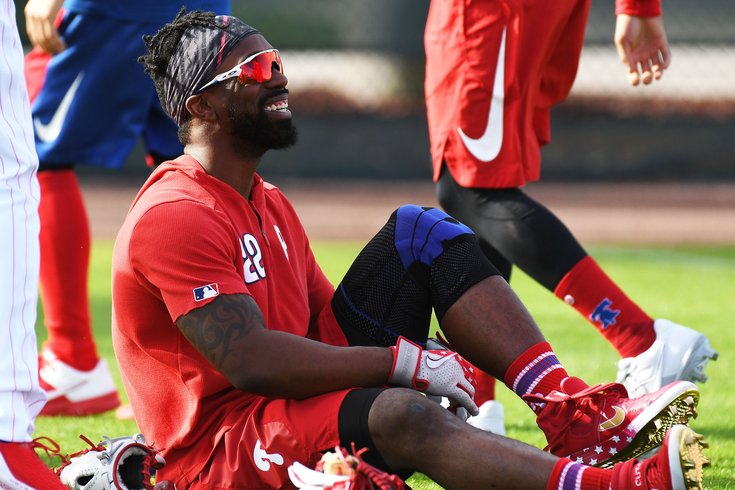 For some reason, the Phillies have been snake bitten there — ever since the mighty Pat Burrell roamed left field for nine seasons (and was replaced with Michael Bourne or some other defensive replacement by Charlie Manuel every seventh inning), the team has had some issues filling the position.

This season's starting left fielder, Andrew McCutchen, is still recovering from a torn ACL he sustained last season. He is expected to return sometime within a few weeks of Opening Day but he will start the year in the IL, giving the opener job to either Jay Bruce or Roman Quinn.

We'll focus mainly on McCutchen, since he'll be the guy once he returns, but also get a sense of what left field could look like over the course of the upcoming season in our latest preview.

From 2011 to 2015, McCutchen was an All-Star five years in a row, was the 2013 NL MVP with two other top three finishes, won four Silver Sluggers and a Gold Glove in Pittsburgh. In those five seasons, he was a different player than he is today — perhaps the best in baseball.

In the years since, with the Pirates, Giants, Yankees and Phillies, he has been a much more down to earth kind of player, and it's this guy who the Phils will be getting when Cutch returns.

Getting the above numbers from your left fielder — especially one who is 33-years-old and a fantastic leader in the clubhouse would be quite fine with the Phillies. But since his health is kind of an issue, they have reinforcements waiting in Bruce and Quinn.

Bruce, who is in his age 32 season, is a left-handed slugger of epic proportions. Over his 12 year MLB career, he's averaged 32 homers per 162 games and last year, despite being injured and only on the team for 149 plate appearances, he still hit 12 homers.

Quinn, 26, has played in 109 games spread over three MLB seasons as he has routinely battled injuries. When healthy, he is a speed demon and one who can really cover some ground in the outfield. He is out of minor league options and so he'll be the fifth outfielder to start the year.

Between the three, the Phillies have a variety of options for left field.

Who has the best situation in left field in the division? Well, that discussion begins and ends with Washington's Juan Soto, who is somehow still just 21 years old. Behind him is Mets' power bat Davis, who broke through in 2019. The other three teams will rely on veterans.

By far, McCutchen has the best track record of any left fielder, but he'll have to get on and stay on the field first — and then produce a little closer to his 2011-15 version than his recent output.

First, a look at the contract status of the Phillies current corner outfielders not named Bryce Harper. We'll include Nick Williams here for now, but he'll likely see his last minor league option exercised (or will be traded) before the season starts:

If there is one glaring long-term opening on the Phillies roster, its in the outfield. We already took a look at some of the top prospects primarily playing in center (though a move from center to a corner spot is a common move), but there is one true corner outfield prospect in the team's top 20.

Jhailyn Ortiz is very young, and looks like he's on a course to make the jump to Double-A sometime as soon as this coming season. He had 19 homers and 65 RBI in just 430 at bats in Clearwater last year, and The Athletic's Keith Law is very high on him, slotting him as the Phils' No. 14 prospect:

The good news is that Ortiz moved up to a pitcher-friendly league that suppresses power and still hit a career-best 19 homers; the bad news is he didn’t hit beyond that, with a .200/.272/.381 line. He’s still just 20 and getting a steady diet of offspeed stuff, which will continue until he shows he can handle it. The raw power is tremendous, and maybe he’ll be passable in left, but none of it matters until he lays off breaking stuff out of the zone. [The Athletic]