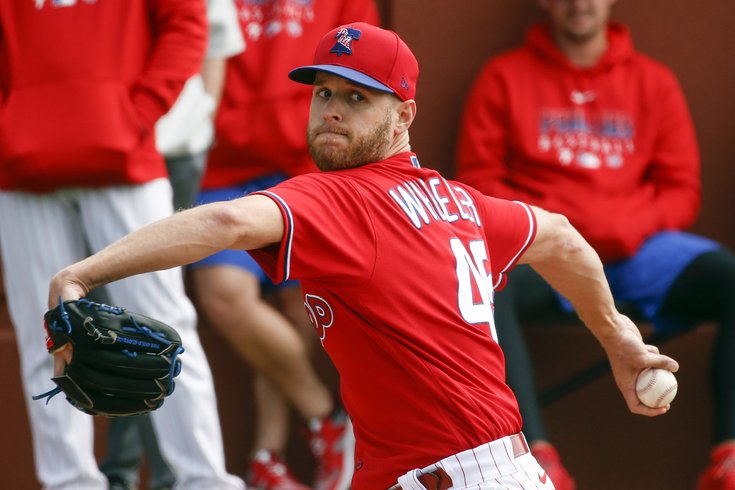 Zack Wheeler slots in as the Phillies' No. 2 on a staff looking to bounce back in 2020.

Let's take a look at the starting pitching...

Last year, the Phillies had starting rotation problems. Their ace only pitched like one some of the time, their veteran Cy Young winner pitched hurt (and was eventually shut down) and their young guns showed they weren't ready for primetime.

In 2020, the Phillies expect their ace — Aaron Nola — to return to form as one of the best starters in baseball. They hope the $118 million they paid for Zack Wheeler gives them a bona fide No. 2. They hope a healthy Jake Arrieta can be a solid No. 3. And they hope one of the sputtering young guns from a season ago rises to the occasion at the bottom of the rotation.

Here's a closer look at the Phillies starters heading into the new season...

Throughout our season preview series, we will be taking a deeper look at each position, but with five starting pitchers to break down in this post, let's get right into the numbers.

Let's ignore for a second that pretty much every player above is a question mark. The rotation on paper boasts a Cy Young finalist from two years ago in Nola, a solid middle of the order contributor in Wheeler (who has shown flashes of being ace-like), a former Cy Young winner, and two former prospects looking to make it through the year on the big league roster — though Eflin did show he could be reliable last year. The upside is moderately high.

The rotation as a whole was middling last year. They were nothing special. The unit posted an ERA of 4.64 (17th of 30 teams). They combined to toss the 13th most innings, allow the 10th most hits and the fourth most home runs. They also, interestingly enough, issued the fifth most walks. Overall, the unit produced a WAR of -2.1 wins, the eighth worst in MLB in 2019.

Philadelphia sent an astounding 12 different starting pitchers to the hill, a very high number for any team. But injuries and lackluster performances game them no choice.

If the Phillies can largely stick to the rotation above (with a few allowances for perhaps a bounce back year from Nick Pivetta or a breakout from Spencer Howard), they will likely be fighting for a playoff spot. If they have the likes of Drew Smyly and Jason Vargas taking starting roles after being summer free agent signings, well, the outlook won't be as good.

Staying healthy and being consistent are the most important things for the rotation this year.

In any other division, the Phillies would have a stout rotation ranking toward the top of the pack. Not so in the loaded NL East, which has every team (except the Marlins) boasting both a legitimate NL Cy Young contender and some serious depth. If we had to rank them, the Phillies would slot in fourth between the Mets and the Marlins.

This was the perhaps best rotation in baseball in 2019 (they did win a World Series, after all). They pitched the second most innings, had the second best ERA, and were in the top 5 in pretty much every major category. All four of the starters who started 27 or more games had an ERA below 3.85 and all of them won double digit games. They are expected to field the same starting five again in 2020.

From the top rotation in baseball, according to wins above replacement metrics, to the third best, the Mets return three of their five from last year — adding mid-season acquisition Stroman and veteran Porcello to the fold. This rotation might even be better in 2020. Stroman has Cy Young talent, as do DeGrom and Syndergaard. Porcello won the award in 2016 (DeGrom won it in 2018). They have a lot of depth at SP too, making this by far their biggest area of strength as a team.

The Braves' rotation was a strength last year too — though they've had some turnover to the top of their staff since last spring training. Soroka burst onto the scene last year as a 21-year-old and won 13 games with a 2.68 ERA. Veteran (and former Phillies great) Cole Hamels will join Foltynewicz, who is looking to bounce back after a rough 2019. Fried and Newcomb are average arms hoping to be solid contributors.

Even the Marlins had a better starting rotation than the Phillies last year — statistically as a whole — and you have probably never heard of any of the names above. There is some potential here but don't expect much, especially with the run support they will not be getting.

There are a lot of tantalizing arms in spring training right now, the most interesting of which is top pitching prospect Spencer Howard. He is currently recovering from a minor injury he sustained this offseason and is coming along slowly, which implies he'll start the season in Triple-A. If he pitches anything like he did last season, (and if Velasquez struggles or someone gets hurt) he may make his debut in 2020.

The team's two next best prospects are Francisco Morales (in Single-A last year as a 20-year-old) and Adonis Medina, who will also be in Triple-A in 2020. Don't be surprised if the team targets a starter in the first round of June's MLB Draft to add another top-tier arm.