Phillies season preview: Which position players will round out the bench? 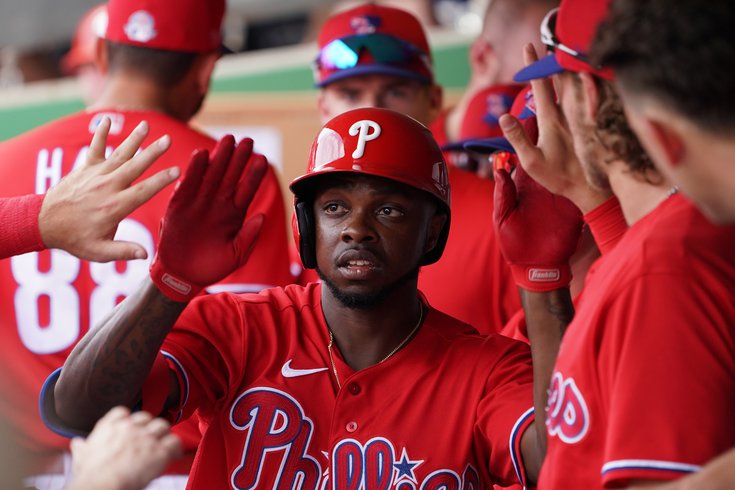 The Phillies bench will be a key piece to the team's success in 2020.

Among the biggest battles this spring in Clearwater — the fifth starting pitcher's job being the most high profile of these — is the fight to prove worthy of being added to Joe Girardi's bench in 2020.

The new manager has said he intends to carry 13 pitchers on his 26-man roster. If we subtract the starting eight from that, it leaves the Phils with a five-man bench.

We'll break form for this preview section, as we have a lot of ground to cover.

An MLB bench is important for two reasons. One, a 162-game season is grueling and depth is always important. Even Bryce Harper needs a day off (he had just five of them in 2019). In addition, though, pinch hitting has never been more important as the three-batter minimum will give a huge advantage to offenses.

Last year, the Phillies were god awful when pinch hitting, and even worse coming off the bench as a substitute.

Phillies hitters off the bench

A lot of the issues above were due to injuries plaguing the lineup all season long, but much of it was due to the construction of the bench itself. Pinch hitters can't be an easy out — they must be an asset to help the team in key situations. Having hitters who are a threat coming off the bench, especially in the NL, can give a manager quite a bit of leverage. The Phillies will need to be able to rely on more than just their everyday players if they hope to make the playoffs in 2020.

Below we have listed 16 serious contenders for a bench role. Before we break them down, we should define what we are calling a bench role. First, with Andrew McCutchen slated to miss some time to start the year, we are going to technically expand the definition of the bench to six players to start the year — as his replacement will either assume a bench role or be sent to the minors when he returns.

Second, we are not counting players we expect to start (like Adam Haseley or Scott Kingery) who may move around or be platooned.

And third, Alec Bohm, Mickey Moniak and other prospects are not included on this list because, frankly, the Phillies would not waste a bench spot on a player they want to receive regular at-bats. We will, for now, assume the above two will start the year in Triple-A before being called up to fill in a regular MLB role.

Here's a look at the bench contenders:

Bruce will bring his left-handed power bat to an assured roster spot and likely the most starts of any bench piece, likely as a DH, in left field and first base.

Quinn, when healthy, is the fastest player on the roster. He is healthy now, and has no more minor league options.

Knapp had some injury issues early this spring but it appears he'll be the backup backstop.

Acquired in a change-of-scenery type trade this offseason, Garlick has struggled a bit with the bat, hitting just .227 so far. He is a veteran outfielder with some pop and will likely be in South Philly at some point this season.

In addition to hitting well in Clearwater (.400 in 20 at bats), Forsythe can play nearly every position on the field and has everything you want from a bench piece.

Harrison is looking to find a new home after playing like an All-Star at times in Pittsburgh. He hasn't impressed much but his reputation could give him a roster spot.

In the same boat as former teammate Harrison, Walker too has been sluggish this spring hitting .208. There is a good chance Walker and Harrison are fighting for one spot.

Torreyes is one of those veterans who will likely wield a light bat, but could play all over the field. He may be put into reserves for later this year.

Maton has stayed on the radar with seven Grapefruit League RBI, the second most on the team.

Gosselin, like Torreyes, is a versatile player who may be a fill-in later this season.

Williams has a minor league option left, making it likely he just misses the cut.

Szczur is a veteran but one who'll likely miss out due to the numbers game.

Martini is another veteran fighting for a spot.

Bethancourt is the No. 3 catcher in the system, but could lose his slot to prospect Deivy Grullon who's stock is on the rise.

Williams is blasting through spring training pitching hitting .364. He will get a few more chances before being cut but will probably have to show he can maintain his bat in Triple-A.

He's flashed power with two homers this spring but will be in the minors barring a development.

With so many moving parts we can't really project or compare, accurately, the benches of the teams in the Phillies division. That being said, here's a look at a player or two who will likely be in each of the four other team's dugouts.

As is the nature of the bench, with Bruce and Knapp becoming free agents next season there isn't a lot of continuity in the long term on the bench. As for this year, there will be some casualties from the current slew of roster holders, with the team likely needing to cut a handful of players from the 40-man to make room for non-roster invitees.

Whether prospects get called up or marginal trades take place (like they did last summer), the Phillies bench will be a shape-shifting unit this season.