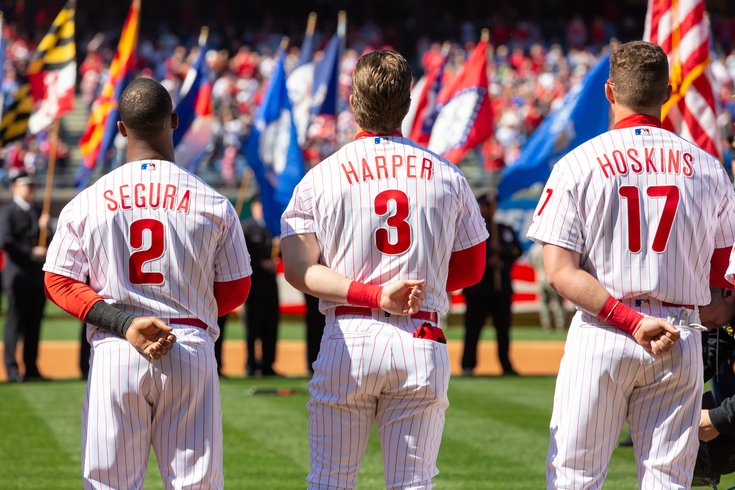 The Phillies got one of their first real scares of the spring on Tuesday afternoon when Bryce Harper was hit on the foot by a pitch in the bottom of the first inning against the Minnesota Twins.

Bryce Harper was hit by a pitch on the foot and exited the game.

Here is the play where it happened. We will update when we know more. pic.twitter.com/wkHmAQp5os

Harper was removed from the game, but later provided an update to calm the nerves of many Phillies fans as we're just over two weeks from Opening Day.

Bryce Harper told a #Phillies spokesperson that is "totally fine" and was removed from today's game as a precaution.

While the news was good for Harper, it came a day after No. 1 starter Aaron Nola was scratched from his start with the flu. On Monday, manager Joe Girardi said there was a chance that the Phillies ace would be bumped from his Opening Day start, depending on when he's ready to return to action and how many starts he'd make during spring training.

Nola missed Monday afternoon’s start against the Yankees in a Grapefruit League game at Spectrum Field because of the flu. Nobody knows how much time he might miss, but it could push back his first start from the March 26 season opener at Marlins Park.

“It’s something we’re going to have to look at,” Phillies manager Joe Girardi said after a 3-1 victory over the Yankees on Monday. “Like, does it get him off his day that he was supposed to pitch to start the season? Possibly. I don’t know. We’ll have to see.”

Girardi said he does not expect Nola back with the team until Thursday at the earliest, and he is unlikely to pitch that day. If Nola pitched on Monday, he would have made two more starts before the end of the spring. If he pitches Friday at the earliest, he would fall one start short before Opening Day. It wouldn’t be the worst thing in the world, but he might be limited with a pitch count.  [mlb.com]

[Before moving on, it's probably worth just mentioning that there's absolutely no indication that Nola has the coronavirus. Because it's all anyone seems to be talking about right now, there's probably a decent chance you read "flu" and assumed the worst, which is totally fair. But given that the team expects him back on Thursday, it appears to just be the regular flu. If (or more likely when) a professional athlete does contract COVID-19, you'll know. Trust me.]

On Tuesday, Girardi provided a much more positive update on his No. 1 starter.

"We're going to wait and see. [Nola] came in feeling better today — tomorrow's an off day — so we'll wait to see how he comes in Thursday," Girardi said on the NBCSP broadcast of the game. "My guess now is if he comes in OK on Thursday, he'll throw a bullpen. And then I would think on Saturday, what we'll do is we'll control his up-and-downs and we'll throw him in a minor league game situation, so we can control that and get him up and down five times."

That's a good sign as it concerns Nola's chances to still be the Opening Day starter. But what about the rest of the lineup? That's where we'll start today's What They're Saying...

The Phillies trotted out an interesting lineup on Monday against the Yankees, one that included catcher J.T. Realmuto atop the order, and there's a chance that's the same lineup he'll use on Opening Day. At least the top two thirds of the order.

"I think it has that potential, yeah," Girardi said of the below lineup.

He went on to add that Jay Bruce, who was not in Monday's lineup, could be in the opening day lineup, as well. The Marlins are likely to go with right-hander Sandy Alcantara as their opening day starter. The left-handed-hitting Bruce would get the nod in left field. Bruce did not play the outfield after Aug. 8 last season because of an elbow injury. He has not played there yet this spring, but Girardi said he could play there as soon as Thursday as opening day comes more into focus.

So, based on Monday's lineup and Girardi's comments, the Phillies opening-day lineup card (minus the starting pitcher) could look like this:

Of course, nothing is cast in stone.  [nbcsports.com]

And on Tuesday — what do you know? — the lineup featured those six hitters to start against the Twins.

Zack Wheeler gets the start today in Clearwater with this lineup behind him. #RingTheBell pic.twitter.com/b7yTLv8Aar

Of course, this is very likely to change once Andrew McCutchen returns from injury, as he's expected to take over the leadoff spot. Once that happens, I could see Realmuto dropping back to the fifth spot, bumping Gregorius back to sixth and so on.

In addition to figuring out the Opening Day lineup — and, possibly, the starter — Girardi will also need to figure out who is going to be the team's fifth starter. And as Bob Brookover points out, that decision won't be able to wait until the second week of the season.

So far, the battle has been between Vince Velasquez, Nick Pivetta and surprise candidate Ranger Suarez, who looked solid as a reliever last year but has surprised so far this spring as a starter. Will one of those three earn the job? Or will the Phillies look to the outside for help?

“They’ve all had starts that weren’t so great,” Girardi said. “Ranger lost the plate a little bit [Saturday] in that third inning. It will still continue. Obviously, I think we’ll start meeting a lot more to talk about things. We talk about things to try to iron things out. We have 2 1/2 weeks left, so we have to make a decision pretty quick.”

Suarez, who pitched well for the Phillies in a relief role last season, threw two scoreless innings Saturday against a watered-down Boston lineup, but ran into trouble in the third inning and allowed two runs before pitching out of a jam. He has allowed 10 hits in eight innings, but he has walked only one batter.

It would be a huge surprise if Suarez won the battle for the fifth spot.  [inquirer.com]

Looking on the bright side

This story from Matt Gelb of The Athletic takes a look at the more human part of the sport, as Nick Williams continues to work during spring training even though he knows his time with the Phillies has more or less run its course.

The reality is harsh for Williams: There are three left-handed outfielders ahead of him on the depth chart — Bryce Harper, Jay Bruce and Adam Haseley — and he has a minor-league option remaining. He doesn’t have a future with the Phillies, yet they have kept him on the roster because they aren’t blessed with the best outfield depth.

“I went into the offseason just very positive,” said Williams, 26. “Control what you can control. Things happen for a reason. … Positive outlooks will always find the surface. Somehow, someway. You don’t know the timing of it. I said, I’m going to come into this year and just have fun. Keep that smile that I’ve had my whole life. You don’t want to lose it. That’s the positive outlook I have this spring.”

The spring is a chance for Williams to perform for the 29 other teams. It’s possible the Phillies find a solution that doesn’t involve sending Williams to Triple A again. In two weeks, they will need to free at least three spots on the 40-man roster to add veterans on minor-league deals to fill the bench and bullpen. Williams’ 40-man spot could be jeopardized. The team has pursued trade scenarios before. Maybe, finally, they find a match.

Until then, Williams has focused on self-improvement — inside and outside the batter’s box.  [theathletic.com]

Down on the farm

The Phillies farm system has some talent at the top, but they still rank in the bottom half of baseball according to MLB.com. (NOTE: They were unranked last season because MLB.com's rankings only went up to 10 in the spring and 15 at the midseason. This year, they decided to rank all 30 teams.)

The Realmuto trade, along with some others during the 2019 season, obviously thinned things out a bit, but both Bohm and Howard could make a big splash this year.  [mlb.com]