Kevin Cooney: MLB has a chance to get it right with coronavirus, but probably won't 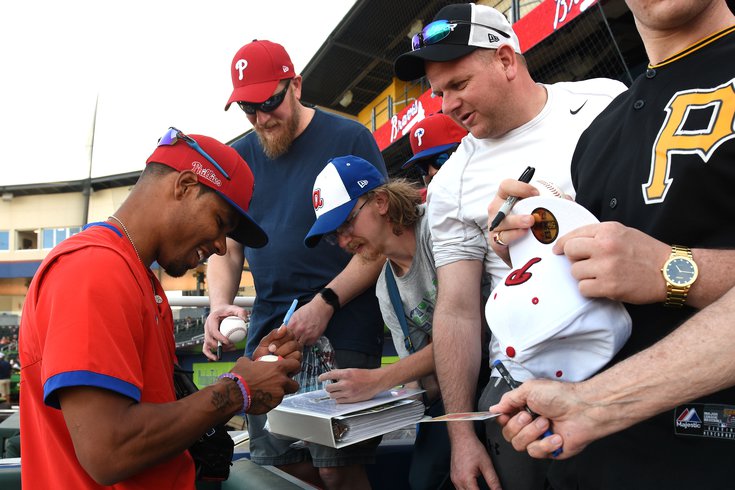 Philadelphia Phillies outfielder Nick Williams signs autographs before the start of a spring training game against the Atlanta Braves.

It is a bright day at the ballpark formerly known as Bright House Field. Indeed, Spectrum Field basks under the glow of an 85 degree Wednesday afternoon for a Grapefruit League tilt between the Phillies and Pirates.

Fans are at the Tiki Bar, enjoying their favorite beverage. Kids are standing near the netting, hoping they won’t get elbowed out of the way for an autograph by the 55-year-old collectable dealer with his big bag of stuff that he’ll eventually get marked up.

And standing right at the back of the fencing overlooking the four fields of the Carpenter Complex is a security guard with a bright white surgical mask wrapped around his ears and covering his nose, face and mouth in the days after two Florida residents were diagnosed with the Coronavirus.

That last image was the most disturbing of all. It instilled an image of fear and danger not seen at a ballpark since the days surrounding the Sept. 11, 2001 terrorist attack.

Two weeks before Opening Day and in the middle of March Madness and the homestretch for the NBA and NHL playoffs, the sports world has met the real world. Major League Baseball joined the two winter sports and Major League Soccer in announcing a clubhouse shutdown on Monday, limiting access to only essential personnel – team officials, in other words — while keeping the media on the outside.

The bigger battle with the pro sports leagues will come down the road on this issue when a permanent ban could be in play. Trying to make that argument now would look petty and selfish.

No, this boils down to a simple question: if a reporter has to stand six feet away from a player for 15 minutes of conversation in the name of safety of public health, why is it OK for 45,000 fans to pack two inches next to each other for four hours, breathing on top of each other?

If security personnel feel the need to wear masks to protect themselves, why is it that exhibition games are allowed to continue at all except as a blatant money grab? If there’s such a danger, why is it players in any sports league can drip sweat and crash into one another?

This isn’t just a baseball issue, after all. However, the point is all the same across any of these discussions. The NBA – as Kyle Neubeck pointed out — is a much tighter environment with fans sitting right next to benches and no physical barriers.

At least the NBA and NHL have the concept of a season ending to keep them pushing through the crisis. Stopping either league right now could be devastating to the overall picture of a season.

However, baseball does have time to get this right. Then again, these days it is a sport that can almost nothing right.

Would it harm Rob Manfred to take a step back, look at the situation and go “you know, maybe it wouldn’t kill us to start on May 1 with a 130 game schedule?” If the crisis hasn’t lifted by then, maybe play in front of empty ballparks. A good commissioner would look and see that. But Rob Manfred is a no good, awful commissioner for a sport without a clue where to go.

And so, they will press on. They will tell you that the risk is small and statistically, it is. They will paint it as part of the way to go about your normal lives and how you won’t be held hostage to the idea of fear.

And then, you will see the reporters standing ridiculously behind ropes in press conferences and guards wearing the masks that doctors wear during surgery. And you’ll wonder why the hell this is even a question.