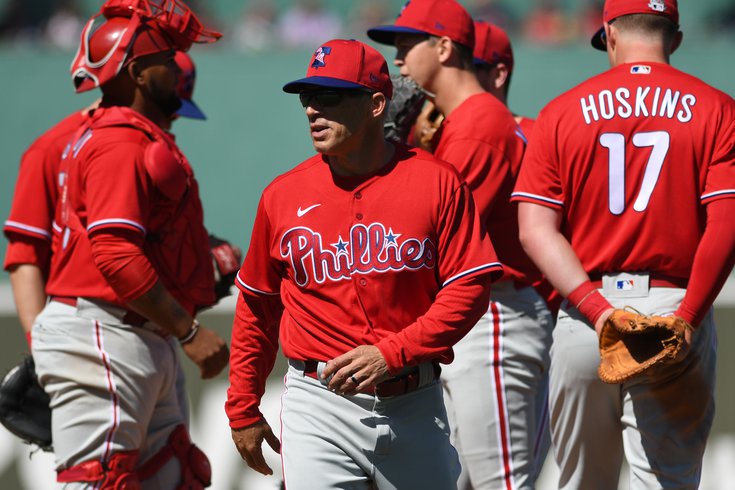 Philadelphia Phillies manager Joe Girardi will have some decisions to make before the team breaks camp.

The Phillies have two weeks of spring training game left ahead, which means time is quickly running out for Joe Girardi to narrow his roster to the perfect 26.

The team made its first round of cuts this weekend, sending a handful of players — including pitching prospects and roster hopefuls JoJo Romero and Adonis Medina — to the minors.

To get ahead of the curve, we've compiled our third edition of our 2020 Phillies Opening Day roster projections.

The changes we've made since February 10 are in italics. We also have added a position player, as Andrew McCutchen is expected to start the season on the injured list.

He still hasn't been inked to an extension, which should give fans a little pause. The team no doubt hopes to have him under contract longterm before the season starts so they don't have to fight other teams for his services when he becomes a free agent at season's end.

Hoskins has been playing pretty well this spring as the tweaks to his swing may do the trick.

Second/third base base: Jean Segura

He's been playing a lot of third base in spring training as he has cross trained to learn both second and third. He played a full season at second with the Diamondbacks before and is more comfortable at the spot, but it looks like Girardi may want him at the hot corner.

Second/third base base: Scott Kingery

Kingery will play on Opening Day, but we just don't know where yet. He will most assuredly be a jack of all trades once again in 2020 — especially with injuries already proving to be an issue. Expect him to start in the infield, and potentially move around based on a potential Bohm call up or outfield health issues.

Gregorius is struggling with the bat in Clearwater but it'll take more than a slow start to take him out of his starting SS role.

Harper will be the right fielder for the next 12 years.

At least for now, Haseley's spot in centerfield is settled.

Bruce' power will be a nice addition to the Phillies' lineup, and assuming he gets back to 100% over the next two weeks he and Roman Quinn will share left field duties until Cutch is back.

With the extra position player spot now open — for the time being — with McCutchen out, Logan Forsythe has earned the final slot in our opinion. He's hit well, .368 so far with a pair of homers, and has played nearly 1,000 MLB games at every position except for catcher. At least during the early period of the season while Girardi is working the kinks out, having players with versatility will be key.

Joining him will be former Pirates stars Walker and Harrison and back up catcher Knapp. Quinn, who has run out of minor league options, should start the year with the MLB team as well.

It was a race between Nick Pivetta and Vince Velasquez for the final stater spot, but it looks like a new candidate and perhaps frontrunner has emerged. Suarez would be a perfect addition to the Phillies rotation as he would give the team a left-handed arm — something they haven't had for a while. He was very good as a reliever in 2019, going 6-1 with a 3.14 ERA in 48.2 innings pitched.

Here's an update on the race for the fifth spot:

The biggest change here — and we have made made four of them — is that Dominguez is healthy and looking like he'll be ready to go on Opening Day. Austin Davis has pitched four scoreless innings and looks like he'll be the team's second lefty bullpen arm. Kelley may be playing his way onto the team, he has 5.1 innings of one-hit baseball this spring. Alvarez has also been solid, with three blank innings on his spring resume.

Those four, we surmise, will be joining two non-roster invitees in Storen and Liriano, and the two best returning bullpen arms from 2019 in Morgan and Neris.