Phillies season preview: Scott Kingery is the man at third base — but for how long? 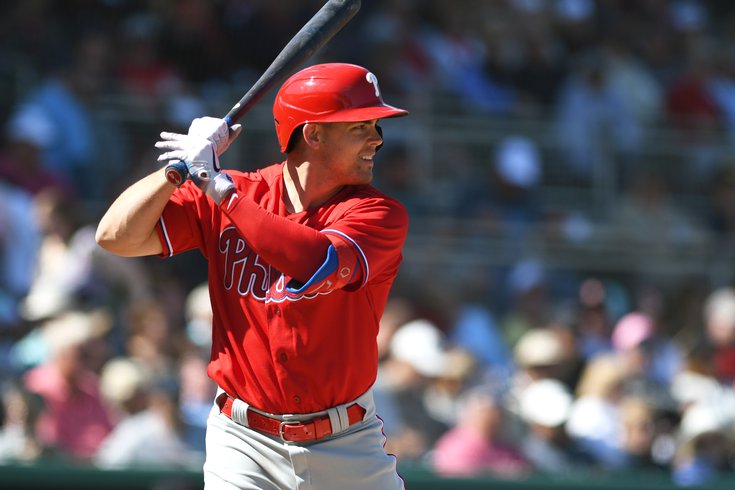 Philadelphia Phillies infielder Scott Kingery fell ill with COVID-19 in mid-June while training in Arizona. He warned Tuesday that the virus left him laid up on his couch for three weeks. Now that he's feeling better, he urges others to take precautions.

Let's take a look at third base...

The Phillies broke convention for Scott Kingery two offseasons ago, when they signed the then-prospect (who had never appeared in a major league game) to a six-year, $24 million contract.

They knew they were getting an unconventional player, and Kingery has shown he is more than worth the presumptive contract Matt Klentak was bold enough to sign him to.

In two seasons with the Phils, Kingery has played every position except for two: catcher and first base. His bat has been slow to adjust to the big leagues, but the 25-year-old has shown improvement year-over-year despite inconsistency month-to-month.

With Maikel Franco, the Phillies' longtime third baseman, now with the Royals, Kingery will get a chance to start as an everyday player this year, but he may not be starting at third for long. The team's top prospect Alec Bohm is knocking on the door. Jean Segura, their presumptive second baseman (and former shortstop) has also been getting plenty of reps at third base — opening up the possibility the two could potentially swap positions.

There isn't a whole lot of information to look at, as Kingery has spent just two seasons playing major league baseball. He hit a meager .226 with only eight homers in 147 games back in 2018, but improved both of those numbers to .258 with 19 homers in 21 fewer games in 2019. His offense doesn't appear to be his best tool‚ his best tool is obviously his versatility.

Defensively, third base was his among his strongest spots on the field:

As you can see, Kingery isn't a very good pitcher. But he is a pretty good third baseman. Though seven errors in 51 games at the position isn't ideal, he did — according to Baseball Reference's "defensive runs saved above average" — contribute a plus-15 number when at the hot corner.

If he can field the position as well as the departed Franco while adding a serviceable bat, the Phillies will take it.

Last season, Josh Donaldson and Anthony Rendon highlighted a stacked group of NL East third baseman. They've left the division and given way to some much weaker stopgaps in Atlanta and Washington, with Philly perhaps slotting in as the third best third base situation for 2020. Jeff McNeil was an All-Star last year and is one of the better bats in the entire division, while Brian Anderson could go either way this season. A look at the numbers:

If Bohm (more on him in just a second) bursts onto the scene and becomes a true anchor at third, the Phils could have a pretty big advantage at that spot on the lineup card over several of their rivals.

It's a small sample size, but through Tuesday's spring training game, the 23-year-old No. 1 Phillies prospect has seven hits in 15 at bats (.467) so far in Clearwater.

It's yet unclear what Bohm needs to do to push Kingery down the depth chart and take his job at third base, but there does seem to be a chance he breaks camp as the everyday third baseman. Outfielder Andrew McCutchen is expected to miss a little time to start the year, and OF Adam Haseley is also fighting back from a head injury. There is a scenario that makes sense where Bohm gets to start at third on opening day, with Kingery in the outfield.

Bohm also could be relegated to Triple-A, where he will wait for his chance (an injury or light-hitting infielder).

Regardless of when the "transfer of power" takes place, there is an odd symbiotic relationship between the former first round pick and the Phils ultra utlity-man. Kingery's ability to slot in at nearly any position pretty much makes it possible for Bohm to be called up to play third but replace nearly any player on the roster sheet, with Kingery slotting over to take over whatever position is being departed.

We'll leave you with this, the scouting report on Bohm (who also plays first base) from The Athletic's Keith Law:

Bohm can hit, really hit, and while he might not do it at third base for the long term, he’s going to hit enough to profile somewhere as a regular. Bohm was the third overall pick in the 2018 draft, and he might be the Phils’ best first-round pick since Aaron Nola back in 2014. The Phillies started Bohm in Low A, where he didn’t belong as a 21-year-old product of a major college program, but he bashed his way out of there and then did the same in High-A Clearwater before finishing in Double-A Reading, where he took advantage of the Eastern League’s best hitters’ park but struggled on the road. He should probably start 2020 there, but I don’t think he’ll stay there long. Bohm is incredibly strong, with power to all fields, excellent zone control, and a great work ethic that extends to his pregame planning against pitchers. He’s big for third, but his footwork is good and he’s clearly worked on his conditioning just since leaving Wichita State. I like his chances to stay at the hot corner, and I absolutely believe in his chances to hit, with high averages around .300 and 25-plus homers, along with plenty of walks and maybe average defense at third in a best-case scenario.  [The Athletic]