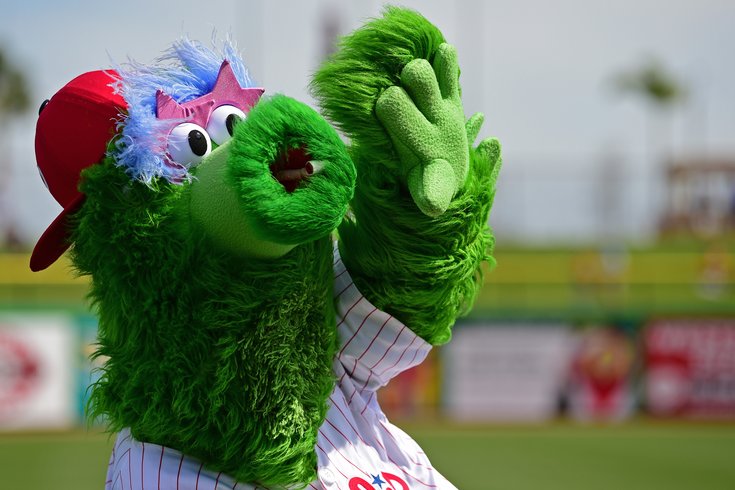 The Phillies unveiled a modified version of the Phillie Phanatic during their first home game of spring training on Sunday at Spectrum Field in Clearwater.

The Philadelphia Phillies played their first spring training home game on Sunday at Spectrum Field in Clearwater against the Pittsburgh Pirates. But what happened on the field wasn't as important as what happened off the field; the official unveiling of the modified Phillie Phanatic for the 2020 season.

Before the Phillies took the field for their home opener, fans could get a sneak peak of the new-look Phanatic courtesy of NBC Sports Philadelphia.

But the changes aren’t as drastic as some feared that they could’ve been. It appears that the Phanatic went shopping during the offseason and got some fresh new shoes and socks. It also looks like he got a nose job done and had his snout shortened and reshaped. Not to mention, a longer blue tail and new-looking eyes are part of the modified Phanatic.

However, there is one notable change with the updated version of the Phanatic. While we don’t have a scale on our hands, it’s clear that the Phanatic lost some serious weight over the winter ahead of the new season. Now it remains to be seen how that impacts his iconic stomach and pelvic thrust.

And to get a good look at the differences between the old and new Phanatic, here’s a side-by-side of the two. From the shades of green, the dynamic between the hands and fur, and the scales underneath the arms, there are some subtle differences that die-hard fans are sure to quickly pick up on.

Before the game on Sunday, the Phillies unveiled the new-looking Phanatic. And it's clear that his personality hasn't changed one bit.

He has evolved, but clearly hasn't matured. pic.twitter.com/Tmo5jHNQOB

Jim Salisbury of NBC Sports Philadelphia reported on Friday that the Phillies made adjustments to the beloved mascot during the offseason in the wake of the ball club’s ongoing legal battle with the Phanatic’s creators, Bonnie Erickson and Wayde Harrison.

Artists are allowed by federal law to renegotiate their rights after 35 years, but the Phillies believe some minor changes to the costume will put an end to Harrison/Erickson's legal argument.

This isn’t the first time that the Phanatic has undergone changes since making his debut at Veterans Stadium in 1978. Nevertheless, the Phillies did an outstanding job at getting fans to tune in for a meaningless baseball game in February on Sunday.