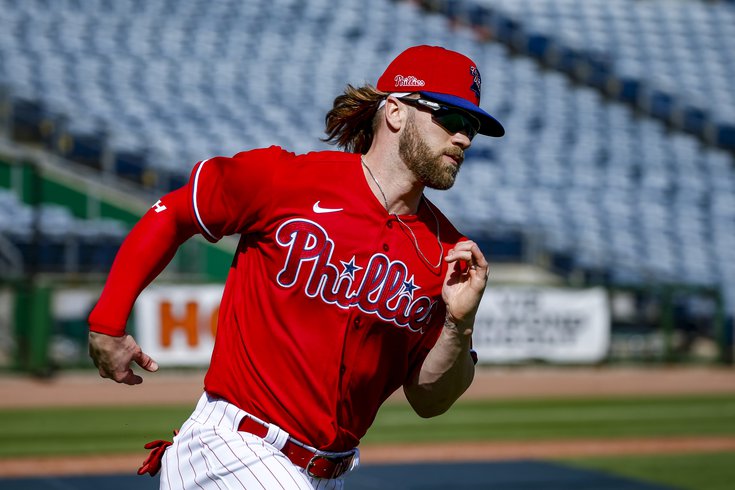 Bryce Harper will be gunning for an All-Star nod in 2021.

The Phillies finished 81-81 last year and a repeat performance won't cut it in 2020. With Joe Girardi and (hopeful) health on the team's side as they prepare to begin their spring training slate of games this weekend, attention is slowly starting to focus on the team's key players.

Baseball is a sport that is all about marginal improvement. If Bryce Harper, who hit .260 last season, had accumulated just 10 more hits (spread out over his 682 plate appearances in 2019), he would have hit .277. A few hits or strikeouts here or there really makes a difference over a 162 game season.

And so, we've decided to piece together various performance projections for seven key Phillies players — Harper, Rhys Hoskins, J.T. Realmuto and prospect Alec Bohm on offense, and Aaron Nola, Zack Wheeler and Jake Arrieta on the mound. Are they expected to improve in 2020? How are they perceived by various mathematical analytical outlooks?

We included two fantasy baseball projections, two advanced statistical projections and baseball-reference.com's own outlooks for the purposes of having a few different perspectives:

Here's what we found:

Harper is projected to increase his home run total (35) in four of five projections with his RBI total (114) dipping or staying the same in all five. His slugging percentage, .510 in 2019, looks to be trending up as well.

Hoskins, as many know, went from being an on-base/home run-hitting machine to an easy out with a terrible second half last year. Every projection expects his .226 batting average to improve, as well as his home run (29) and RBI (85) totals.

Realmuto was so good last year that a repeat performance will still make him, probably, the best catcher in baseball statistically again in 2020. He hit .275 with 25 homers and 83 RBI.

Bohm is competing to start the year as a rookie at third base. In Double- and Triple-A last year, the 23-year-old infielder hit .305 with 21 homers and 80 RBI in 125 games. Baseball Reference has no projection for him, while just ZiPs and Streamer projected his production over a whole season.

Nola is projected to improve in every area, it seems, except for innings pitched (he had a career high 202.1) last season and strikeouts (he fanned an impressive 229 batters).

None of the projections we looked into thought Wheeler would have an ERA below 4.00 (he was at 3.96 last year). They all also project he will pitch fewer innings than his career best 195.1 in 2019.

Arrieta was only healthy enough to make 24 starts last year, over 135.2 innings. The projections are optimistic that he'll make more starts, but don't see his 4.64 ERA from last year improving all that much.