Top 10 storylines for the Phillies in spring training 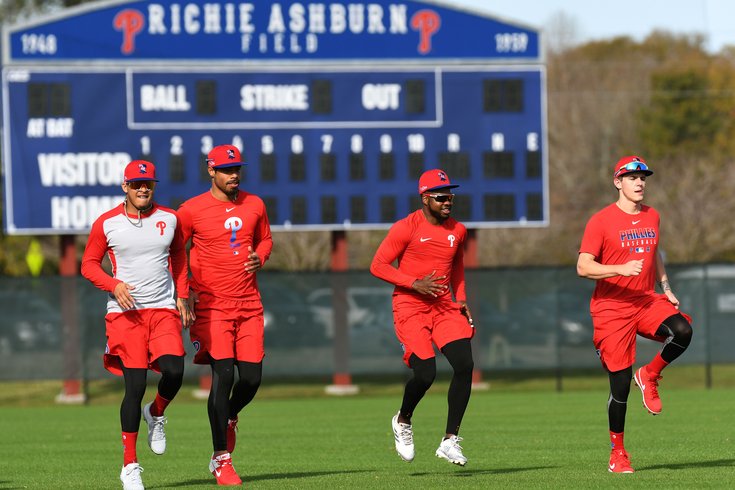 The hype feels way down (at least compared to last year), but the expectations are still there. The 2020 Phillies have to show improvement this season.

Joe Girardi took the field this morning with pitchers and catchers as the march toward a playoff berth — it would be the first for the Phillies since 2011 — begins in earnest Wednesday in Clearwater.

The next month and a half will be filled with optimism and glimpses of the team's plan for the year to come. As spring training begins, we've compiled a list of the 10 most important storylines for fans to keep a close eye on heading into their season opener in late March.

He's the top story. The Phillies reportedly are not interested in making a deal for Kris Bryant, and probably not for Nolan Arenado either. They did not make a bid for Anthony Rendon nor did they seriously vie for the services of Josh Donaldson. They got rid of Maikel Franco last fall. With no true third baseman on the roster, the Phillies passed up on four of the best third basemen in baseball.

Why? Well, they have the best third base prospect in all of baseball in Bohm. He's torn up minor-league pitching in just two seasons in various levels of pro ball. If his defense can translate, he could break camp as a Phillie.

"I want to be a complete player," Bohm said while visiting the Phillies clubhouse last month. "That includes improving on defense, improving in the box, becoming a better base runner — there's a lot of things I want to continue to do in the offseason."

Whether his "service time" will be a hinderance (the team can theoretically save some serious future cash by holding him out of the majors for a few months) will have to be seen, but the team appears to be all in on Bohm.

This has been pretty well documented, but we will recap it here anyway. The Phillies starting five in 2020 will be:

If we were handicapping things, before anyone takes the field in a competitive game, we would say Vince Velasquez has a 50% chance at getting the job, Nick Pivetta a 30% chance, and a prospect — like Spencer Howard, Adonis Medina and others split the other 20%. Velasquez and Pivetta are the only two hurlers in the mix with MLB experience, and each of them has had very mixed success. This battle is the top one to watch.

3. Rhys picks up the pieces

Hoskins was a revelation last season. For two reasons.

First, he was getting on base at an incredible rate while putting up MVP-like number for the first few months of the season. Then, he dropped off the face of the earth, losing his swing, his concentration and becoming a liability.

He's been hard at work to reclaim his brief but prior success. Here's a bit more on that from a great piece worth reading by Matt Gelb at The Athletic:

He has not watched much video this winter. “There were times last year,” Hoskins said last week, “when I think I flooded my mind with too much searching.” Instead, he decided to talk more about hitting with teammates and friends. He studied video of other hitters. He heard ideas from Joe Dillon, the new hitting coach. He asked more questions.

But, now, Hoskins is sitting at a computer in the video room with an at-bat from August frozen on the screen. He can tell you where he missed, why he missed and how uncomfortable he was in the moment. That’s simple. But, during the winter, Hoskins wanted to dig even deeper to explain a 71-game, post-All-Star break stretch in which he hit .180/.318/.361.

It led him to unexpected conclusions.

“I’ll be the first to tell you: It’s going to look a little different this year for me,” said Hoskins, who turns 27 in March. “That’s more to do with me thinking that I can put my body in a more consistent position to do damage. No matter where the pitch is.”   [The Athletic]

4. The return of Cutch

According to Joe Girardi, though slowly, Andrew McCutchen will be back after a torn ACL derailed his — and possibly the entire team's — 2019 season. Cutch was the team's everyday leadoff man before he got hurt, and the spot then became a mangled, jumbled inconsistent issue for the rest of the year.

How he recovers will be key for the Phillies, and getting it right this spring is of utmost importance.

The Phillies made an incredible deal last offseason when they netted the best catcher in baseball in a trade with the Marlins. He's a free agent at the end of the year and the Phils do not want to let it get that far.

The star was arguably the best catcher in baseball last year while winning NL Gold Glove and Silver Slugger honors. This all while playing an incredible 145 games. He will set a record for a contract given to a backstop — and whatever it is he will be worth it. Will the deal be struck before the team heads north?

What should have been a big year for the development of young bullpen specialist Seranthony Dominguez ended — like so many others in the Phillies bullpen last year — with a season-ending injury. Yesterday, Girardi said Dominguez was going to come along slowly but will be close to ready to pitch in a game soon. Wednesday he himself said he expects to be ready for opening day.

We touched on third base earlier, when we discussed Bohm, but if he doesn't break camp as the everyday third baseman, the team will have a decision to make. Will Scott Kingery play third, with Jean Segura at second? Will Kingery take his natural position of second and Segura move to the hot corner?

Just how the infield will shake out, aside from Hoskins at first and Didi Gregorius at short will be interesting to keep an eye on. Both players, according to Girardi, will practice at both positions.

We did our best to project the Phillies bullpen, but there are a ton of question marks and very few sure things. More than 20 arms will be competing for what is likely to be seven or eight spots in the bullpen when the season starts. There is depth, to be sure, as a lot of players got big league experience last season when the injury bug bit hard.

Having a solid group of relievers with set roles and consistency will be very key for the Phillies as they have a relatively unproven starting rotation right now.

Haseley was a former first-round pick who got his big break in 2019 and played well, hitting .266 in 67 games in centerfield. With Odubel Herrera (probably?) in the rearview, Haseley will be the everyday centerfielder to start the year. Will he keep the role? Will he grow in it?

His numbers in the minors and during his stint with the Phillies show promise, but it's a big jump to play every day. He'll have some talent in guys like Roman Quinn and Mickey Moniak looking to take the job from him.

The following veteran players are in Phillies camp as non-roster invitees looking to get another chance in the majors:

Will any of them beat out a youngster and earn a place on the 26-man roster? There certainly is a role for a few of those "old guys" to earn on Girardi's squad — but each will need to prove it during camp. Aside from perhaps Velasquez, Pivetta and Bohm, performing well in spring training is the most important to these vets.