What they're saying: Phillies out on Kris Bryant, PECOTA madness and predicting when top prospects get the call 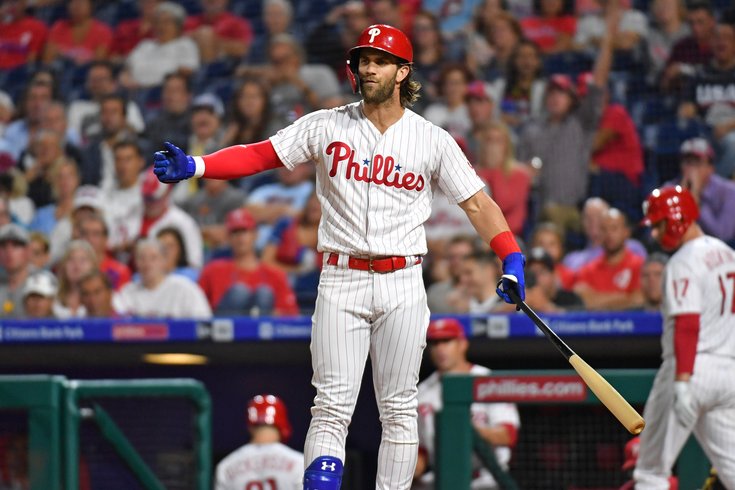 Bryce Harper reacts to seeing the PECOTA projections for the 2020 Phillies.

On Tuesday, Phillies pitchers and catchers reported to Clearwater ahead of the first workout of spring training under new manager Joe Girardi.

Coming off a disappointing season in which the Phillies finished .500 and ended up in fourth in the National League East. Needless to say, that's not where many fans saw the season going after an offseason in which they spent more money and acquired more All Stars than any other team previously had.

This offseason, the Phillies went out and landed starter Zack Wheeler and shortstop Didi Gregorius and should be getting back plenty of reinforcements in the form of players returning from injury.

So, optimism should be high, right?

Well, it may be among fans, but the experts over at Baseball Prospectus gave Phillies fans a reality check when they unveiled their 2020 PECOTA* projections for the upcoming MLB season.

*PECOTA, or Player Empirical Comparison and Optimization Test Algorithm, is a proprietary projection system created by Nate Silver for Baseball Prospectus that uses players' past performance in an attempt to predict how the upcoming season will play out.

According to BP's PECOTA projections, the Phillies won't finish any higher in the NL East standings — and will actually lose a handful of games more this season than they did a year ago. Here's what they're expecting in the division this year:

That's right, Baseball Prospectus is projecting that the Mets, who finished third a year ago, will leapfrog both the division champs (the Braves) and the World Series champs (the Nationals) to win the NL East this season. The Phillies, meanwhile, will be once again left on the outside looking in when September rolls around.

That's certainly interesting, considering it doesn't quite match what oddsmakers have had to say about the Phils. For example, Bovada put the Phillies' win total at 85.5 for 2020, up nearly nine games from what PECOTA is projecting. Similarly, Bovada has 90.5 wins as the number for the Nats and Braves, quite a bit higher than the above numbers. The one spot they're close to agreement is on the Mets, with Bovada predicting 86.5 wins, however Bovada has them tied with the Phillies for the third-best odds to win the division. As for the Marlins, both agree they're going to be quite a bit behind the rest of the pack.

So, why are the PECOTA projections so much lower than what Vegas is saying? For starters, the Vegas lines are less of a prediction and more of a measure of the fans' confidence, as oddsmakers look to keep relatively even numbers on both sides of the line. So while Phillies fans and the betting public may be optimistic about the Phillies' chances this season, the same can't be said for the much more objective numbers.

That being said, let's take a look at what they're saying about the Phillies as spring training gets underway...

Phils out on Bryant

Several times this offseason, there have been reports that the Phillies were interested in trading for Cubs third baseman Kris Bryant. And while it appears they did indeed discuss a possible deal, Meghan Montemurro of The Athletic reports that anything actually materializing seems unlikely, for several reasons.

Although the Phillies discussed a trade for Bryant with the Cubs a few months ago, right now the teams don’t see themselves as a match, sources told The Athletic. A trade would likely require third baseman Alec Bohm or right-hander Spencer Howard — and possibly both — for a deal to seriously move forward, along with other pieces.

From the Phillies’ perspective, the concerns in pursuing a potential deal for Bryant are multifaceted:

Balancing the roster’s payroll structure has been a talking point raised by front office personnel throughout the offseason. The Phillies do not want to be too top-heavy. Essentially, the front office wants to avoid too many big contracts that would make it more difficult to add to the roster in the coming years. Six Phillies players will make at least $14 million in 2020. Some of those deals come off the books after the season, leaving the club with four $14-plus million players in 2021: Harper, Zack Wheeler, McCutchen and Jean Segura, while Aaron Nola’s average annual value (AAV) bumps up to $12.25 million. Of course, that doesn’t include a presumed contract extension for J.T. Realmuto, which could feature an AAV of around $20 million.  [theathletic.com]

On Tuesday, Girardi was asked about how the Phillies will handle third base this season, with Alec Bohm waiting in the wings and Scott Kingery and Jean Segura expected to split time at the hot corner.

"Jean will do work at third base and at second as well as Scott," he said. "The one thing I want is the sum of the three parts, not just one person individually and how it is best for us."

If anything, it seems like the Phillies feel comfortable with what they have in the infield and don't want to block Bohm, who could find himself in the big leagues at some point this season.

The kids are coming ... eventually

Speaking of Bohm, MLB.com Phillies beat writer Todd Zolecki was asked about the Phillies two biggest farm guys in a recent Phillies mailbag. Service time is always worth monitoring when it comes to calling up top prospects, but Zolecki believes their readiness, and the way the guys already on the big-league club are playing, that will have the greater impact on when the Phillies opt to bring up the likes of Bohm and Spencer Howard:

Are the Phillies going wait a month or so to bring up Alec Bohm?
-- @Don_MannyOG

The Phillies are going to give Scott Kingery and Jean Segura plenty of time to get going this season, regardless of what positions they are playing. In other words, even if service time for Bohm, MLB Pipeline’s No. 30 overall prospect, was not a consideration (it is), the Phils will not pull the plug on one of their projected Opening Day starters if they start slowly and Bohm is playing well in Triple-A. But if Kingery or Segura struggle and Bohm is looking like a superstar in the making, I think you could see him pushing for a promotion by June.

At what point in the season can we expect Spencer Howard to join the rotation?
-- @MLParlayDoug

The above answer for Bohm also holds true for Howard (No. 34 overall prospect). Even if Howard pitches well at the beginning of the Triple-A season, the Phillies will want to give Vince Velasquez or Nick Pivetta (or whomever the No. 5 starter is) an opportunity to prove himself. But the Phils’ front office is counting on Bohm and Howard to produce in the big leagues at some point. They won’t wait forever to promote them if they look ready.  [mlb.com]

Is the 'pen mightier?

Over the weekend, we ranked all the pitchers and catchers (nearly 50 of them) that will be in Clearwater this spring. Over at The Inquirer, Matt Breen took a closer look at the pitching staff as well, and considering we already know who four of the five starters will be — Aaron Nola, Wheeler, Jake Arrieta, and Zach Eflin, with Nick Pivetta, Vince Velasquez and others competing for the final spot — let's take a look at how Breen sees the Phillies' bullpen battle playing out.

It's also worth noting that the Phillies will likely sign reliever Tommy Hunter, who only appeared in five games last year due to an elbow injury, to a contract for this season, meaning he'll potentially be taking up one of those coveted spots in the 'pen.

Contenders: Anyone with a live arm in the Clearwater area.

Hunter took a physical Tuesday morning in Clearwater and will have a major-league deal if all goes well. His deal — the only major-league contract the Phillies gave to a reliever this winter — puts him on the roster. Morgan and Dominquez are expected to be healthy after suffering injuries last season, but nothing is guaranteed. Pivetta and Velasquez each worked last season as a reliever, and one of them will return to the bullpen once the rotation is set.

That leaves the eight-man bullpen with two openings. The Phillies added three relievers — Robert Stock, Deolis Guerra, and Reggie McClain — this offseason through waiver claims and signed six veteran relievers this winter to minor-league deals, effectively turning their bullpen competition into an open tryout. Some of the pitchers, such as Drew Storen and Bud Norris, did not pitch in the majors last season. Others, such as Francisco Liriano, pitched well last season while others — such as Anthony Swarzak, Blake Parker and Trevor Kelley — had mixed results.

The Phillies scoured the margins for relief help, hoping one or two show enough this spring to crack the opening-day roster. But the real intrigue in Clearwater could be with the prospects who were invited to camp. Pitchers such as Garrett Cleavinger, Connor Brogdon, Addison Russ, and Damon Jones might not be in Miami for the season opener, but they could reach the majors in 2020.  [inquirer.com]

Now, they'll just have to hope they can stay healthy, unlike last season.

Whenever you're ready, Ser

Let's stick with the Phillies bullpen for a minute, as that was a big part of Jim Salisbury's "10 storylines to watch" for this spring. Here's what he has to say about the anticipated return of Seranthony Dominguez as well as how he sees the rest of the bullpen playing out...

A year ago at this time, he looked like a legitimate building block for the club, a hard-throwing reliever with a couple of wipeout pitches who could get big outs at the end of games. Dominguez never looked in shape last spring, his top velocity was slow to come and by early June, he was done for the season with a damaged UCL ligament in his right elbow. (That’s the serious one, the Tommy John ligament.) Team officials talked openly the possibility of surgery — and that’s unusual before surgery is actually prescribed — but superstar orthopedist James Andrews suggested a more cautious route of rest and rehab for Big Ser. All these months later, he is up and throwing and feeling good. The Phillies will go easy with him out of the gate in camp, and he’s expected to be a go for opening day. If Dominguez is healthy and firing, he will be like a big offseason addition in the ‘pen. But you never fully know about a player’s health until he’s doing it full-force in game competition so a lot of eyes will be on Dominguez, especially as he ramps up later in camp. ...

We mentioned Dominguez’s importance. Lefty Adam Morgan is also coming back from an elbow injury. Velasquez or Pivetta could end up in the bullpen. Both have the stuff to succeed there if they can throw enough strikes. If the Phils decide to transition one of these guys to the bullpen, it will happen in camp. After bringing in the likes of Pat Neshek and David Robertson in recent years, the Phillies did not make a significant bullpen addition though non-roster invites Drew Storen, Bud Norris and Francisco Liriano will be worth watching. Liriano, a lefty, made the transition to reliever with Pittsburgh last season and had a 3.47 ERA in 69 games. Left-handed hitters were just 29 for 160 (.181) against Liriano the last two seasons.  [nbcsports.com]