What they're saying: Storylines begin to swirl as Phillies head to Clearwater 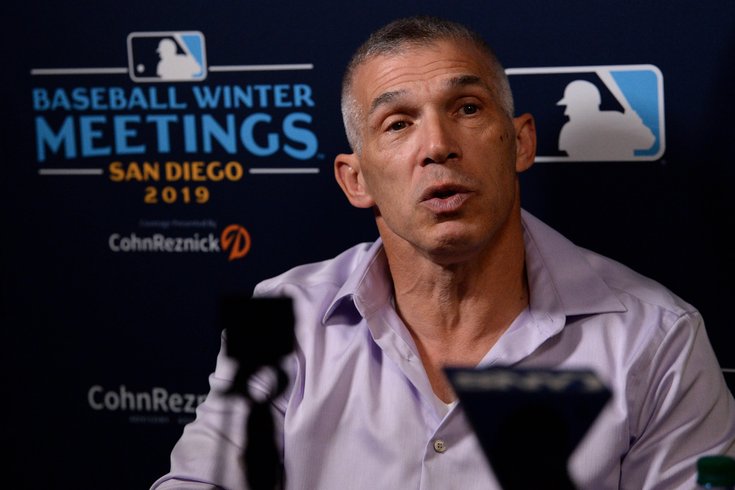 If you didn't notice (or don't yet care), the Phillies are days away from taking the field in Clearwater to begin team workouts in spring training for 2020.

As always, there are a bevy of storylines to follow, from Rhys Hoskins' bat to Nick Pivetta's arm to the young prospects invited to big league camp, vying for a roster spot.

As we'll continue to do all season long, we've compiled some of the more interesting takes from the Phillies-covering-world for your enjoyment this weekend, ahead of pitchers and catchers reporting next week.

Here's what they're saying about the Phillies:

The Phillies may not have made a big enough splash for many aggressively-minded fans this offseason, but they did ink arguably the best available manager to head their club. Just how many wins of improvement the hiring will be good for remains to be seen, but it is surely the storyline that hovers all the others this spring.

Girardi also represents the Phillies' biggest addition during an offseason in which they signed pitcher Zack Wheeler to the third-largest free-agent contract in franchise history (five years, $118 million) and Gregorius to a one-year deal.

And his presence will dredge up the question of how much difference a manager really makes to a team's record.

Will Girardi-over-Kapler spark a two- or three-win improvement? More? Regardless, Middleton trusts it will help bridge the gap to the 90 wins that likely are necessary for the Phillies to make the playoffs for the first time since 2011.

“I feel like a sneaky way the Phillies have helped us is the coaches they’ve brought in, the manager they brought in,” Realmuto said recently. “I feel like we have a lot of experience to work with now. I think it’ll help us a lot behind the scenes.” [Inquirer.com]

All eyes on them

The Phillies have 29 non-roster invitees in training camp, and Montemurro broke down all of them at The Athletic this week, placing them into sections. The grouping of players with the most interest no doubt, is the 10 prospects they'll give a chance to face big league hitting/pitching (at least for a stint) in spring training. Here's what she had to say about them:

These guys will get eyes on them in camp and hands-on work with the big-league staff. Bohm and Howard are expected to help the team at some point in 2020; when that happens is still to be determined. Howard might not get much, if any, Grapefruit League action. The Phillies plan to monitor his workload this season and hope to use most of his allotted innings at the major-league level. Bohm’s defensive performance at third base is a subplot to watch. One of the criticisms of his game, especially from outside the organization, centers on whether he possesses the athleticism and ability to stick at third base. Few doubt he will rake, though.

Moniak gets to experience his second big-league camp, and he has an opportunity to reach Triple A this year. Warren’s high strikeout rate could put the lefty in play later this year for a big-league bullpen role if he continues to climb the minor-league ranks. Listi’s defensive limitations (first base and a shaky performance at third with the IronPigs in 2019) make him a tough fit with the Phillies. Rosso is another minor-league arm to monitor this season. [The Athletic]

"Call to the Pen", a fansided blog, took a look at the NL East from a variety of different angles last week — everywhere from health to the bullpen to coaching staffs. One of the more interesting sections of Venada's story was a look at the luxury tax and available salary situations of the four contending teams in the division. An argument is made that even though they are right against the threshold for paying a tax, the Phillies may be in pretty good shape for 2020 (if they don't make any more offseason moves), with regard to being able to add a piece at the trade deadline.

While the Phillies were third in NL free-agent spending, the Braves were fourth at $116.25 million. And Atlanta has increased their payroll to its highest level under their current ownership. Apparently, Liberty Media Corporation desires postseason glory, but will management be as active as last July?

The red pinstripes’ strategy for ’20 is inking difference-making pieces instead of volume. Yes, their $132 million outlay was third behind Washington’s $316.75 million and the Cincinnati Reds’ $164 million. The Fightins are at $205 million AAV ($204.99 million AAV), which allows $20-23 million AAV to pick up hurlers for the five-man staff and relief corps. Basically, the execs will leave $2-3 million to cover incentives and other 40-man expenses, but $20 million can remedy their ills. And the 20 percent rate equals a $4 million tax.

Paying a 50 percent Luxury Tax again doesn’t appeal to the Nationals, but they are currently $10 million AAV under the CBT. So, they can avoid a fourth straight campaign of penalties. As for the Mets, they are at $201.7 million AAV and must move salary to have more than $6.3 million available for July.

Financially, the Phillies brass will have an advantage at the trading deadline. But which organization will have more surprises and expectations met than disappointments, injuries, and question marks? Only the baseball gods know! [Fansided]

Big V to the rescue

Assuming a prospect (like Spencer Howard) doesn't blow everyone away, the final starting job will be going to Nick Pivetta or Vince Velasquez. Here's what Witte and The Good Phight surmise will be the reasoning behind Velasquez' ascension to the fifth and final role in the rotation:

We all know the top two are set in stone. How Arrieta and Eflin are trotted out doesn’t really matter much, but they’ll both be in the rotation to start. It’s the fifth starter that will be the battle of the spring. Both Velasquez and Nick Pivetta will be vying for the final rotation spot. The loser will head to Lehigh Valley to begin the year unless the team decides that a bullpen spot is of better usage. Here, we have Velasquez winning the battle for a few reasons. He has in the past shown that he better as a starter than as a reliever. He is quite vocal about his desire to remain a starter since he prefers the routine of a starter over being unsure of when he’ll be needed again as a reliever. Both pitchers have minor league options left, so it’s probably unlikely that Pivetta will be in the bullpen to start. The team would likely want him to be stretched out already in case of injury. [The Good Phight]

And finally, to expand on the projection that Velasquez (or Pivetta) will be good enough to earn the fifth starting role, there is a lot of buzz heading into spring training about Brian Price, the new pitching coach for Philadelphia. High praise has come from all corners of the Phillies-punditry world, with many seeming keen on the idea that Price may be able to unlock the potential that many Phillies pitchers have flashed but have been unable to harness in recent years:

[Larry] Bowa believes the staff will benefit from Price’s philosophy of pitching to strength.

“In my opinion, that’s why we didn’t have success last year,” Bowa said. “We pitched to how the analytics said we should pitch instead of pitching to our strengths. It was all about game plan. I love game plans, but if you can’t get a pitch over that day, you need to adjust the game plan. There’s no universal way to pitch.”

Other than the addition of Wheeler, who signed a five-year, $118-million contract in November, the Phillies have done little to improve their pitching personnel this winter. They are banking on a healthy return for several relievers, most notably potential difference-maker Seranthony Dominguez, and the improvements of other pitchers, including Velasquez and Pivetta, a pair of right-handers whose accomplishments have not come close to matching their potential. Fans are surely tired of hearing this, but the team desperately needs one of these pitchers to emerge as dependable this season. It would be even better if both do because the one who is edged out of the rotation could be a force in the bullpen.

“It’s great talent,” Price said of the Velasquez-Pivetta tandem. “But we do have to refine that talent and the productivity.” [NBCSP]