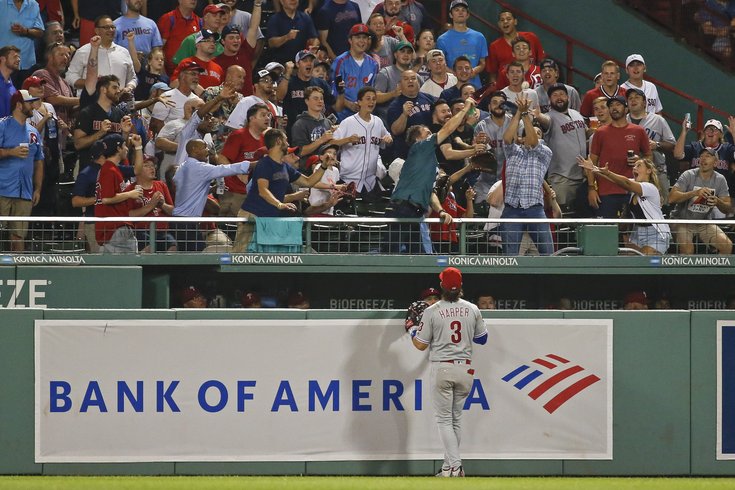 Right fielder Bryce Harper can only look up and watch as Phillies pitching surrenders another home run.

The home run has never been more influential in baseball, and for the 2020 Phillies, it could be their key to succeeding.

The team made moves this offseason to help increase their production at Citizens Bank Park (adding Didi Gregorous, who averages 21 home runs per 162 games, Neil Walker, who averages 19, plus others) and to lower their homers allowed (adding Zack Wheeler, who has been in the top 12 in home run rate and top 10 in HR/9 innings each of the last two years).

The Phillies have been more susceptible as a team to damage from the long ball than most, as they gave up the fifth most dingers in 2019 (at a 4.1% clip).

Here is some more context on the home run trend the Phillies are looking to buck this summer:

Are those numbers just the price a team must pay for playing in Citizens Bank Park (a ballpark which clocked in with the 7th highest ESPN ballpark factor — 1.170 — with 255 homers hit there in 2019)? As we wrote last offseason, the ballpark is notorious for its high rate of home runs.

However a deeper dive shows that the 2019 Phillies were just dreadful at keeping the ball in the park. They had a 9-homer deficit in HR allowed.

Philadelphia's relievers, in some ridiculous statistical anomaly, allowed the 29th most doubles in contrast to the 8th most homers. The unit also was so injury-rattled that barely any of the team's top relievers made it through the season intact. But that's not as bad as the starters were.

Something needs to change. The Phillies can't win at Citizens Bank Park if they are not at least hitting more home runs than their opponents (particularly with Bryce Harper, Rhys Hoskins and other power bats in the lineup).

Wheeler has allowed five homers in Philly pitching as a Met, and 41 of the 75 homers he has allowed in his career have been solo shots.

Over the last two seasons, Wheeler made 60 starts with a 3.65 ERA and 1.19 WHIP. He allowed only 14 home runs in 2018 and 22 in 2019. In fact, over the last two seasons, the only pitcher in baseball with as many innings as Wheeler (377⅔) and as few home runs allowed (36) is Jacob deGrom. The ability to keep the ball in the park is more important now than at any point in baseball history. Citizens Bank Park is a lot more hitter-friendly than Citi Field, but keep in mind that Citi Field ranked 16th in home runs last season and 22nd the year before. It was closer to the middle of the pack than it was to Dodger Stadium, Oracle Park and Comerica Park. [NBC Sports Philadelphia]

A probably inconsequential but noteworthy stat from Phillies catcher J.T. Realmuto — who led the league (by a 45 inning margin) in time spent playing behind the plate — is that he led the majors with 207 HR allowed in 2019, the most of any catcher, 27 more than Yasmani Grandal.

New manager Joe Girardi and the Phillies front office appear to have made it a priority to attack this issue, as their signings over the last few months signify. A healthy bullpen paired with Wheeler's knack for keeping the ball live could also help Realmuto catch a few more strike three's and a watch a few less baseballs fly over right field.