Eytan Shander: If Segura can give up whiskey, Phillies fans can give up booing (at least for a little)

Plus, beaning the Astros and banning Tim Tebow (from the XFL) 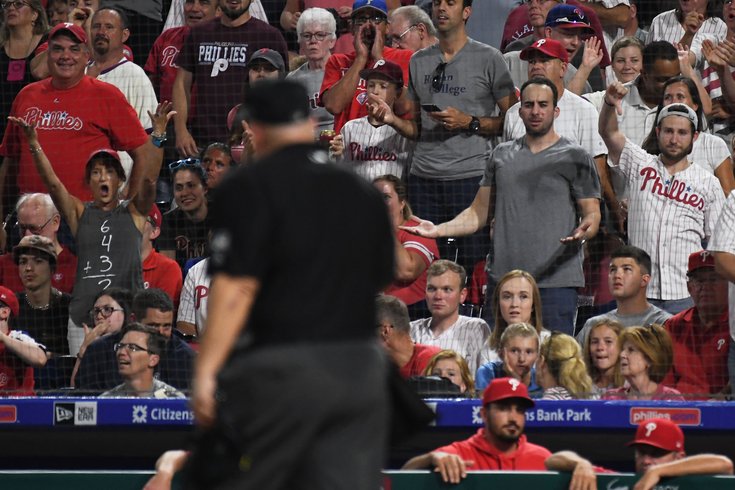 You are still an idiot if you booed Gabe Kapler before his first home game.

It doesn’t mean you were wrong for thinking something was up, but your means will never justify blindly hitting an end. With Joe Girardi starting his new tenure as the Phillies manager, hopefully you morons learned your lesson.

I doubt it. You’re probably the same idiot tweeting or calling a radio station demanding the Sixers trade Joel Embiid this summer because he “played harder in the ASG than he has for Brett Brown” or something.

The number 162 used to mean the start of a long stretch of fun coming in the form of warm weather and beautiful people down at the ballpark. Now, it’s the cold sterile reminder of all the extra time you have to complain about something, especially if you are jumping in early.

Enter Jean Segura and the #SeguraChallenge.

When Segura spoke to the media about losing weight and quitting his drinking, it hit me. I felt that.

He says he goes to bed earlier and is really taking care of his body#Phillies ⚾️🔥🌴 pic.twitter.com/pBYjfP5FGn

Who among us wouldn’t benefit from taking a month off from our vice of choice? We all have our methods and escapes, but one thing we seem to do more collectively as a fanbase is run out of patience – especially with new people or things.

If Segura can quit drinking whiskey and get his ass in bed a little earlier this offseason, we can all take a month (yes, a month) off from booing this Phillies team. It’s an exercise that will help you cope with ebbs and flows of any season, especially one that lasts as long as MLB. If Segura can shut up and move to third base so the team can play Scott Kingery at second, then we can shut our mouths for a couple of home games as they figure this thing out.

The whole idea – and maybe adding some light as to why people were drinking so much last year – was to move away from Gabe Kapler. Everything he stood for, we needed the opposite. I agree with the level of optimism and excitement brought in by Girardi, but I also get this team is far from a lock to win a wild card spot, let alone the division.

You won’t find many pundits willing to stake their names on this being the Phillies' division to win… or lose. Bryce Harper is in Year 2 of a monster deal. JT Realmuto needs to be paid. You just saw them bring in a new manager. You have to give it time. The ownership – or GM – won’t go over the luxury tax anyways, so even if you did go down to shout and scream at a below .500 team, you aren’t getting anything this year.

Are the Phillies going to make a move at the deadline and give up a top prospect or two to bring in someone on the final year or so of their deal? No. Save your breath. You’ll need it for Sixers as they hit March.

What Are the Odds?

The Cleveland Indians were hit by 103 pitches in 2008, a record that still stands today according to baseball-almanac.com. William Hill set the over/under for this year’s Astros team at 83.5 HBP, a number that seems rather low.

The total for how many times the Astros will be hit by a pitch this season has opened at 83.5 at @WilliamHillUS.

By the time you read this it might be at 85. Hey, it could move like an XFL line and be at 90 by the weekend. Here’s why you take the over; and why they may give the ’08 Indians a run for their money. It starts with revenge – despite the pleas by MLB Commissioner Rob Manfred and Astros Skipper Dusty Baker – but gets pushed over the top by Houston’s own doing.

This is not a team that’s flown under the radar since being busted for cheating. You've got to hand it to Tom Brady. For as smug as he came off during all the different allegations, he never lashed back at players or teams. Houston is coming undone before the season begins and is fully aware of the (literal) target on their backs.

But it’s the Astros and their behavior that will open up the floodgates for beanings. Picture this: George Springer pimps his lead off HR as the entire dugout comes out behind him – like the Eagles D celebrating a Jalen Mills pick – and thus opens up the door for his teammates to be plunked. Why? Because everyone gets plunked in baseball. There are about 546,392 unwritten rules, and if you break any, you get hit.

The bottom line here is that the combination of more batters getting hit, based off batters extending more counts, has opened up more opportunities for a HBP. Even the data supports the Astros getting high heat!

These guys on the Astros aren’t going into hiding. They will be as brazen as ever, especially thinking they have the shield of protection from MLB. After the first bomb gets pimped, or the first time a pitcher stays on the mound too long after K’ing the side, you will see teams say, “The hell with it” and start throwing high, or should I say "a record” high.

As the #1 XFL fan in Philadelphia, this would be the one gimmick that could push me away. Despite half of the league having QB play worse than some Pop Warner teams, Tebow isn’t for the XFL. I’m not sure he’s for a two-hand touch beach league. Here’s proof this thing is taking off and why football (you listening, Philadelphia?) markets would eat this up:

That beat 7.1 average for non-Seahawks afternoon games on CBS in Seattle-Tacoma market during '19 #NFL season. https://t.co/11Y4xpuNky

I’d rather follow that woman who wore Kim Kardashian’s butt for a day than any contrived piece of drama surrounding Tebow “making it” in the XFL. Stay out of my league, you crumb!

I started Omniscient this week on Netflix, and I’m hooked. Despite being only one episode in, I’ll binge it by next week’s column and have a thorough review.

Hopefully you will be all caught up by then, as the show seems to have an original – as difficult as that may be – spin on the surveillance state we currently occupy.

A tech company has created a “system” where a large part of the city is sealed off, and each person is monitored by a drone the size of a gnat. Of course, it’s designed to protect you, filming everything you do from sleeping to sh— you get the idea.

An intern who helped create the latest advancement in the drone tech comes home to find her father murdered. But there’s no record on any drone. There are some crazy scenes in the first episode where she is desperately trying to find answers. It’s not long before she realizes the only way to any truth is to first outsmart her drone.

Carla Salle plays Nina the intern and is fantastic. She’s already shown a range of emotions in just one episode. Pending a 28-3 level meltdown, this is the show right now.