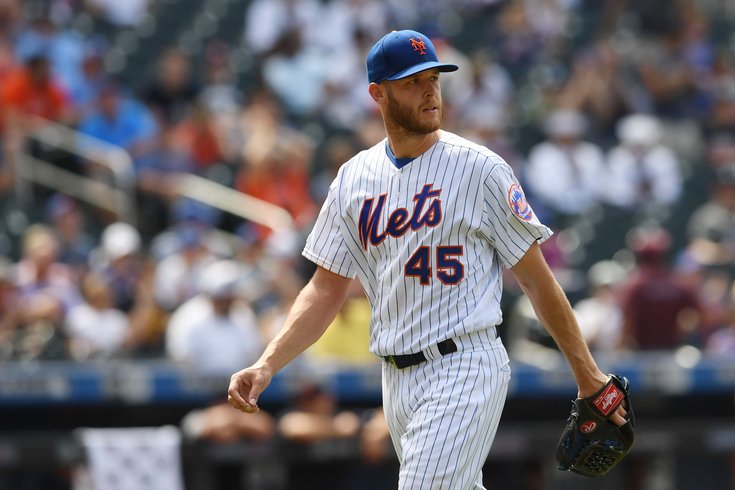 The Phillies and Mets are no strangers to throwing 'fighting words' at each other.

Back in the "glory days" of the Jimmy Rollins Phillies, there was some playful banter between the two that ultimately led to the Phillies dominating (and two unforgettable Mets collapses).

Former New York starter Zack Wheeler on Thursday was asked by the New York Post if he gave the Mets a chance to counter the $118 million, five year deal he got from Philly before he signed it and he said “It was basically just crickets when I did.”

Well, Mets GM Brodie Van Wagenen hasn't taken too kindly to that assessment. But instead of simply refuting it, he took several not so subtle shots at the 29-year-old pitcher.

BVW took exception to Wheeler’s rip of #Mets.
“Our health & performance dept, our coaches, all contributed and helped him parlay 2 good half seasons over the last 5 yrs into $118M. So I’m proud of what our group was able to help him accomplish. I’m happy he was rewarded for it”

More Van Wagenen on Wheeler: "Zack is a good pitcher. That’s why we wanted to re-sign him. The contract and the market that he enjoyed was beyond what our appetite level was. I said that before. He got paid more than we were willing to give him."

There are two "insults" to unpack here — both of which could ring true to Phillies' fans chagrin.

First, was he overpaid?

Wheeler's five-year-deal pays him roughly $23.6 per season. By contrast, the highest paid hurler in history — Gerrit Cole — will earn $36 million. Stephen Strasburg signed for $35 million per season this past offseason too.

Here are some pitcher's contracts from 2020 to compare:

There is no scientific way to compare salaries with proper weight given to age and performance. Wheeler will earn roughly 66% of what Cole makes per year but has generated around 52% of the WAR per pro season. However Wheeler has pitched far fewer games than the pitchers on this list. The most recent free agent class was particularly good, but Wheeler is one of the youngest players signed.

According to Spotrac.com, which has a mechanism for calculating market value, Wheeler was worth $23.4m per season. A pretty substantial argument could be made he was overpaid, and the Mets had reason to be cautious. The Phillies paid for his potential, and because there was a premium at the position. In other words, the Phillies took a gamble. New York was looking at past performance.

Which leads us to the claim by Van Wagnen.

He had just "two good half seasons?

In reality, when healthy, Wheeler has been fairly consistent and reliable, though not a Gerrit Cole-caliber Cy Young candidate.

With such a small sample size from Wheeler, who missed two entire years to injury and was not himself in 2017, those two half seasons are promising.

Was the Mets' GM being a smart ass? Was he being smart? Or just bitter?

If the contract winds up a good one and Wheeler is a healthy anchor in the Phillies rotation, the question will answer itself.

If he is unable to pitch like he did in his best "two half seasons" with the Mets? Well, then Van Wagnen can hang his hat on the Mets responding to Wheeler's contract with "crickets."