Who needs to improve the most in Phillies' spring training? 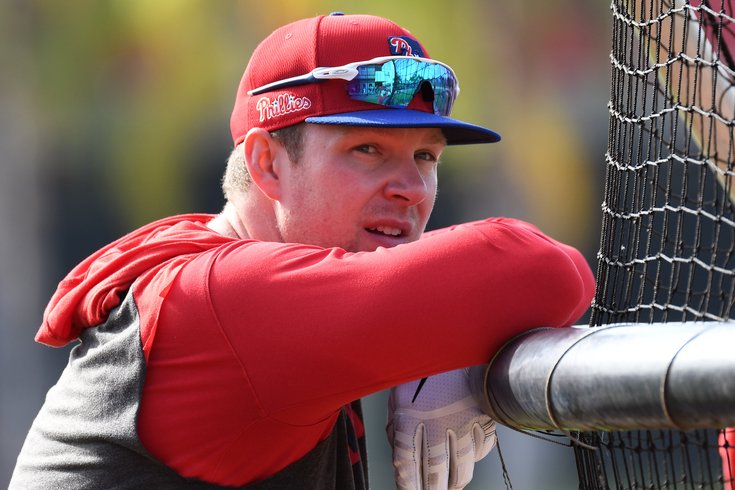 In spring training, just as in baseball as a sport, it's easy to focus on individual areas of improvement. After all, almost every variable in the game is determined by one player, independent of his teammates.

And so with a week or so left until the Phillies start playing games — and a month and a half or so remaining before the games start to count — let's take a look back, and then forward, at the individuals returning to the squad with the most need for improvement. The Phillies' ability to rise to expectations (and earn a playoff spot) will hinge on several players upping their game for 2020.

For the purposes of this list of five players, we are not including those trying to make an impression and make the team as a non-roster invitee (like Alec Bohm, or Neil Walker). Clearly improvement is needed by all of those in order for them to earn a roster spot.

Here's a look at five Phillies who must be better in 2020:

Hoskins has been hard at work re-vamping his swing this offseason, a swing that totally, utterly failed him during the second half of 2019 when he hit .180 over his last 71 games (after hitting .263 with 20 of his 29 homers in the first 89).

Frankly speaking, the Phillies need Hoskins' power bat and patient eye in the heart of their order to have any kind of success in 2020. Playing in one of the more hitter-friendly ballparks in the MLB, Philly has not taken advantage of short porches much in recent years. With J.T. Realmuto, Bryce Harper, Andrew McCutchen and Didi Gregorius all lending power of their own to the starting lineup, some of the pressure should be off of Hoskins, but a rebound is pretty much a necessity. Otherwise, Alec Bohm will not hesitate to assume the first base role from Triple-A.

If you're wondering "why are they wasting time talking about the Phillies backup catcher?" you have a valid point. But we DO read our readers comments and a ton of complaints about the Phillies' decision to go with Knapp as the backup have been everywhere on our website this offseason. Let's address and explain the move.

J.T. Realmuto played a ridiculous 145 games last year, making the Phillies backup catcher pretty much the least important in baseball. Philly's front office is hoping for the same in 2020. And because of that, they thought it silly to expend much resource on the spot. Knapp costs $710k, and has a good handle on the pitching staff when he is a backstop. Where he has really been hard to deal with is as a pinch hitter. In 34 chances last year Knapp mustered just seven hits. Being just a bit more reliable off the bench will be important in 2020.

One note: he has a minor rib injury to start training camp, which COULD open up the spot for someone else, though the team has made it clear he's the back up if healthy.

Quinn has been on the cusp of making an MLB impact for three seasons now. The 27-year-old is incredibly fast and swift in centerfield, but has not stayed healthy, not once. Last season, Quinn battled several injuries while appearing in just 44 games, just 23 of them starts. The likelihood is that he will be the Phillies' speedy base-running option off the bench and the fifth outfielder (Jay Bruce will be the fourth). He may get a few spot starts, but barring an injury, it's unlikely he will play much.

The Phillies are relying on 33-year-old McCutchen to bounce back from a torn ACL, so there could be a need for outfield help throughout the season on an insurance basis. In addition, a marked improvement will be incredibly important as the Phillies' bench ranked 26th of 30 MLB teams last season. Pinch hitters posted a -1.3 WAR in 2019.

The Phillies are stuck with Arrieta and his $25 million salary this season before he has reject-able team options in 2021 and 2022. In his first two seasons in Philly, following Cy Young caliber pitching in Chicago, Arrieta has combined to go 18-19 with a 4.26 ERA. He's been the very definition of mediocre.

It's doubtful any performance — save for one that marks the return of his 29-year-old self (he will be 34 when the season begins) — will convince the Phillies to pick up his next $20 option. But he will surely try. Some of the pressure is off with Zack Wheeler taking the No. 2 role behind Aaron Nola. Arrieta has pitched through and missed time due to injury both years he's been in red pinstripes. Will a healthy Arrieta pitch more like himself?

Whoever the 5th starter is

For reference, 1.33 is the MLB average for WHIP (walks plus innings pitched). Do you want any of those pitchers back in 2020?

The Phillies top two options in spring training to assume the fifth starter spot are Velasquez and Pivetta, each hoping to provide some more consistency than they did a year ago while avoiding a "demotion" to the bullpen. Youngsters like Adonis Medina and Spencer Howard are also outside contenders to earn the fifth starting job.

Though the No. 5 man in the rotation is expected to be the weakest, the revolving door that saw so many players start was not completely injury-related. It was performance based as well. A successful 2020 could depend on some more roster stability, and that could start with the rotation staying intact and pitching better from top to bottom.