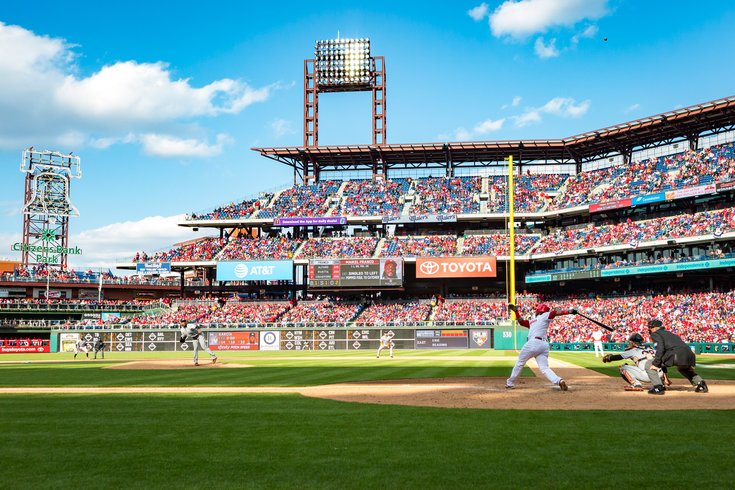 Citizens Bank Park is one of the more hitter-friendly parks in baseball.

Citizens Bank Park is a place for homers. Usually.

Just last season, the 15-year-old stadium yielded the fourth highest home run rate in baseball. Historically, it's been a great place for hitters — as the 2008 World Series champs and the competitive teams in the years following famously bashed the ball.

This coming season, the Phillies should be back toward the top of the majors in home runs again, after adding Bryce Harper and a trio of other hitters with some pop during a very eventful offseason.

First, let's create some context. Of all the balls flying out of The Bank last year, the Phillies hit only 186 of them, right in the middle of MLB teams — the 15th most in baseball.

The middle of the pack is not where a team in that ballpark should expect to be, though it was a slight uptick over previous seasons. Here's a look at their home runs and home run rate since the team first moved into its current home in 2004:

A few things are clear from this table. First, home runs are trending way, way up in the league as a whole. Just last year, 11 teams hit over 200 homers. The Phillies' haven't reached that milestone since they last appeared in the World Series in 2009.

Matt Klentak and the Phils front office added the left-handed power bat of Harper — a match made in heaven for Citizens Bank Park's short right field fence. They also brought in Andrew McCutchen and J.T. Realmuto, two players who can hit for some considerable power.

Here's how CBS Sports projects the Phils' new acquisitions will perform this season:

These projections, particularly Harper's could be on the low end, as Larry Bowa said a few days ago that he thinks Harper will hit 40 or more. Betonline.ag, an offshore sports betting site handicapped Harper's home run over/under at 34.5.

The right fielder has enjoyed playing in Philly since he entered the league in 2012, hitting 14 homers in 50 games — the most of any city he visited as a National.

That infusion of nearly 100 home runs is more than half their total from a year ago. Of course, they also lost some pop as Carlos Santana, Jorge Alfaro and a few others were traded away or walked in free agency. But their home run total was just 44.

Doing the math, the Phillies are getting a theoretical net gain of 51 home runs this season. Last year, that would have given them 237 homers — the second most in baseball (behind the Yankees' historic 267).

Rhys Hoskins, who had 34 dingers last year is back and is projected by CBS to hit that same number in 2019, is moving from the outfield back to first base. This swap could actually help his power swing.

"Rhys moving back to his natural position probably makes him a more comfortable player at the plate," Phillies manager Gabe Kapler said earlier this winter. "I think theres a good chance we seen an uptick in his offensive performance."

The Phillies needed a big power infusion, and that seems to be the biggest stat-sheet need the team addressed this offseason. In addition to long balls, they should also see an increase in their 23th ranked slugging percentage (.393) from a year ago. Harper all by himself has a career slugging percentage of .512.

For a comparison, the Yankees' Luis Severino received 6.2 runs of support per nine innings last season, the most in MLB.

The Phillies needed offense, and they went out and spent more than $400 million on hitting over the last four months.

So bring your glove this year. The ball will fly in South Philly this summer, and it will feel like 2008 all over again for more reasons than one.