'He's supposed to have a conical honker, and now, they've made him look stupid,' the 'Last Week Tonight' host quips on Sunday's episode 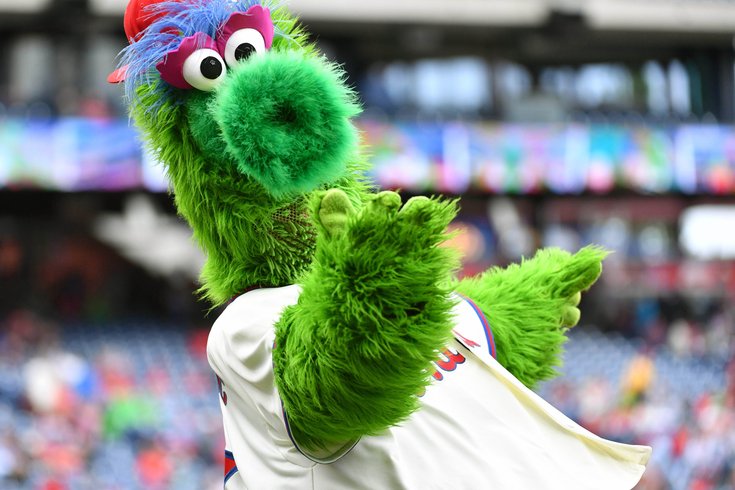 'Last Week Tonight' host John Oliver took aim at the Phillie Phanatic's redesigned look during Sunday's episode. Oliver takes particular issue with the new shape of the mascot's snout, which has changed from conical to cylindrical. He urged viewers to use the hashtag #RespectTheConicalHonker.

It's been a week since the Phillies unveiled the redesigned Phillie Phanatic. The changes to the beloved mascot, which come after the team's ongoing legal battle with the mascot's creators, have outraged fans – among them, John Oliver.

We knew the "Last Week Tonight" host is a fan of Philadelphia Flyers mascot Gritty. Since the team birthed that shaggy, orange, lovable mess, Oliver has used Gritty as a punchline numerous times – including adding the mascot to his mock U.S. Supreme Court to represent Justice Brett Kavanaugh and bringing him on stage during his comedy show at The Met.

But Oliver has not been so public about his passion for Philly's original superstar. "If you have never heard of the Phanatic before – you're frankly in for a treat because he's absolutely incredible,"  Oliver giddily explains to "Last Week Tonight" viewers during Sunday night's episode on HBO.

He shows clips of the Phanatic doing his signature belly dance (with Gritty), blindsiding a minor league baseball mascot, and a four-hour yule log video the team released for Christmas. "No disrespect to Martin Scorsese, but that (yule log video) is clearly the best four-hour film of 2019. It's not even close," the Oliver says of the holiday video, comparing it to Netflix's "The Irishman."

The Phanatic is a cultural icon in the city, and the redesign resulted in backlash from fans everywhere and the rise of the hashtag #notmyphanatic.

@Phillies slight changes?!?! You ruined the only constant winner in Philadelphia! Settle with the artists and bring back our icon. You are willing to pay players millions, you should be willing to pay the same for the Iconic Phanatic who brings us to the games 2. #NotMyPhanatic pic.twitter.com/sPx2ufiKoo

It’s worse than I thought... #NotMyPhanatic

They might have well done this to him!!! #notmyPhanatic pic.twitter.com/PrfVDG40Li

The changes to the Phanatic include star shapes around his eyes, scale trim under his arms, and a blue tail. Though, Oliver points out the most glaring error of all the changes – the reshaped "conical honker."

"It's a cylinder now – which is ridiculous," the host says. "He's supposed to have a conical honker, and now, they've made him look stupid. You respect the conical honker. #RespectTheConicalHonker."

The Phillies are being sued by Harrison/Erickson, Inc., the New York-based creative company that was hired to design the Phanatic in the 1970s. In the 2018 lawsuit, the company claims it holds the copyright for the mascot and retained the right to terminate their contract with the Phillies — which ends on June 15.

The Phillies fired back in August with own lawsuit claiming the team had obtained those rights in the renegotiation of their contract in 1984.

If the team loses the lawsuit, it's possible the Phillies could lose the Phanatic, which is an enticing possibility for Oliver, who ended the segment with a pitch video narrated by Bob Costas, to make the Phanatic the official mascot of "Last Week Tonight."

"Sometimes a hero needs a new challenge, a new home, a home that doesn't want to change you into whatever the f*** this is," Costas says as an image of the revamped Phanatic appears on screen. Watch Costas work below:

Video from the entire Phanatic segment is not posted on the "Last Week Tonight" YouTube account, but if it is added, we will update this article. In the meantime, if you have access to HBO, it's worth checking out this week's show.