'The Irishman' review: Scorsese's mob drama is worth the hype

Netflix's marathon movie is packed with mob lore, but Robert De Niro, Al Pacino and Joe Pesci's acting keep it from getting bogged down 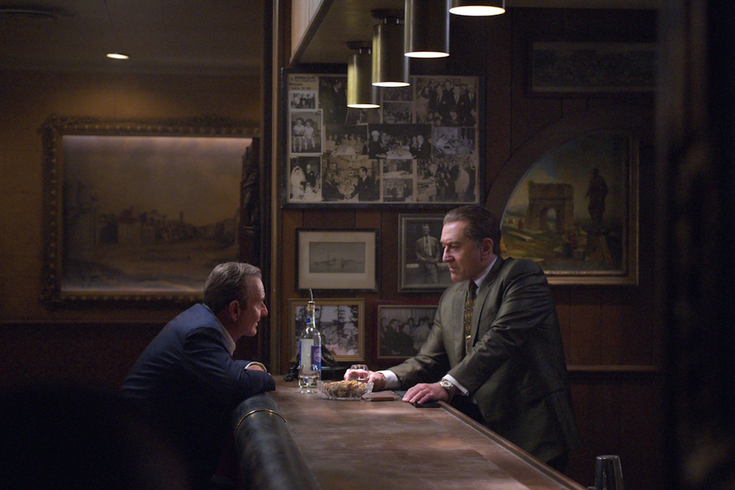 'The Irishman' stars Robert De Niro and Joe Pesci, pictured above, and Al Pacino. The film, directed by Martin Scorsese, tells the story of Frank Sheeran, a hitman who worked alongside some of the most notorious figures of the 20th century.

RELATED: Where to watch 'The Irishman' in theaters this November

Frank, and his relationships with both Jimmy and Russell, are at the core of the movie. As secondary characters are introduced, most are accompanied by text that pops onto the screen to explain they end up dead, and usually by multiple shots to the head. It's the kind of dark humor that does well in a movie filled with blood splatter, car explosions and bodies in wood chippers.

The plot for "The Irishman" is mined from Charles Brandt's "I Heard You Paint Houses," a book based on one-on-one interviews with the real Frank Sheeran.

And Scorsese quickly establishes exactly what that phrase means – and what kind of movie this is – in the film's opening with the blast of a gun shot and a splash of blood on a wall. 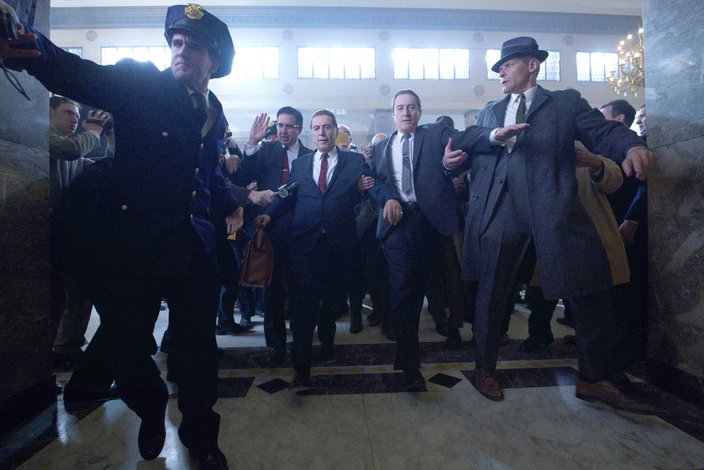 A scene from Netflix's 'The Irishman,' staring Al Pacino and Robert De Niro.

The movie first sets up Frank and Russell's friendship, and Frank's willingness to do whatever Russell asks of him, then introduces us to Jimmy, who Frank quickly grows close with, as well.

"In the '60s, he was like The Beatles," Frank says of Hoffa, while also acknowledging that today people may only remember the union leader as someone who disappeared.

The movie is packed with people, places and events, but De Niro, Pacino and Pesci's acting keep the exceptionally long film from feeling bogged down by Philly mob lore you may not know – like how there's one spot on the Schuylkill River where everyone would go to toss their guns after a crime – and historical facts you may have forgotten about or never knew to begin with – like that Bobby Kennedy and Jimmy Hoffa hated each other.

Let it also be stated that the de-aging technology applied to the actors is amazing, perhaps because it doesn't distract from the leads' performances.

De Niro, Pacino and Pesci really get to shine in the second half of the "The Irishman," starting with Pacino's reaction, as Jimmy, to the news that John F. Kennedy was shot. (Side note: Hoffa is eating ice cream in the scene, and it's one of at least three times the union leader is shown with a sundae. What's up with that?)

There's also a scene where Jimmy laments on how a man should always wear a suit to a meeting, whether it's "Florida or Timbuktu," that stands out as one of the more entertaining moments in the movie. Throughout, though, it's the banter among the main characters that makes the film worthwhile.

Then in the last act, after we've seen the glamorization of gangsterdom, Scorsese asks us to think on what makes life meaningful. De Niro and his convincing portrayal of a conflicted hitman grappling with his life choices is powerful, and the last scene of the film stayed with me as I left the theater.

The film is well-acted, well-done and surprisingly very moving at its heart, despite being filled with some of the most notorious characters of the 20th century.

Watch the trailer for Netflix's "The Irishman" below: