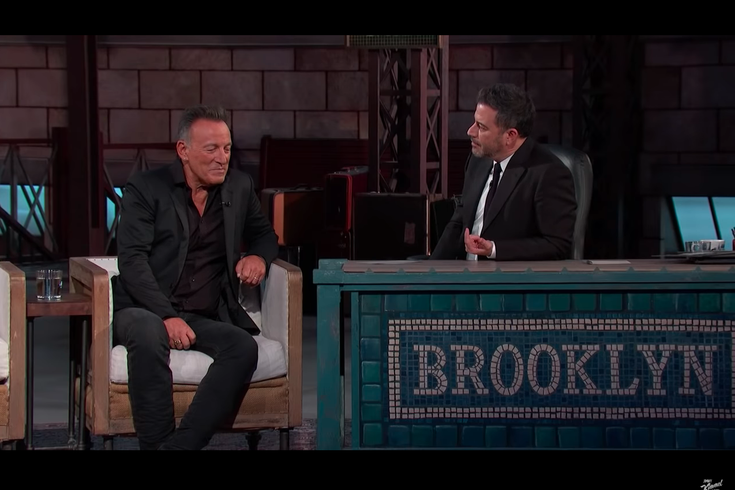 Bruce Springsteen appeared on 'Jimmy Kimmel Live' on Monday night to talk about the exhibit on his life in New Jersey and his appearances at two local movie theaters, surprising fans watching his new documentary.

As part of Kimmel's week of shooting live shows in Brooklyn, Springsteen discussed his recent visit back to his hometown of Freehold to surprise a theater full of fans before a screening of "Western Stars," a documentary about his new album.

He also told Kimmel about his recent trip to the Monmouth County Historical Association, to see the new exhibit "Springsteen: His Hometown" that explores the rocker's lineage and life in New Jersey.

“The most interesting thing was they had a small parlor guitar, which is what people played in those days, a small guitar ... going back to the 1800s supposedly from one of my relatives," he said. "So, I'm not the first guitar player in the Springsteens."

On Saturday, Springsteen and co-director Thom Zimny made an appearance at a screening of "Western Stars." The Asbury Park Press reported he showed up to two screenings of the film, which made its debut at this year's Toronto Film Festival.

"We knew we weren't going to tour, so I tried to figure out a way to get the music to you," Springsteen told the crowd at the AMC Loews Freehold Metroplex Cinema.

The film, a visual representation of his newest album, features Springsteen performing all 13 songs, backed by a full orchestra and band in his 100-year-old barn.