The menu serves the brewery's beer and Chinese-inspired dishes, like 'Leftover Lo Mein' 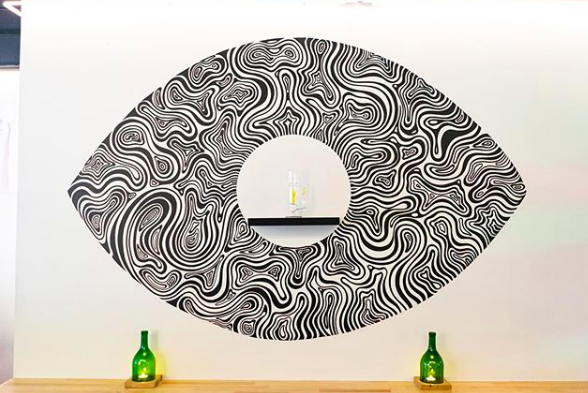 Ardmore's Tired Hands Brewing opened St. Oner's restaurant in Fishtown on Monday. The new restaurant's name is a play on the word "stoners." The interior with neon lights, green accents, logo of a twisted-looking face, and psychedelic eyeball mural above their countertop enforce the theme.

The small restaurant, run by the celebrated Ardmore-based brewery, is now open for reservations and walk-ins across, the brewery announced earlier in the week via Instagram. Located at 2218 Frankford Ave., across from the the Tired Hands Biergarten, the new restaurant will serve food, natural wine, a cocktail menu, and the brewery's own beer.

St. Oner's name is a not-so-subtle play on the word stoners. The space's neon and green-lit interior, and logo of a twisted-looking face with blazing green eyes, reinforces the theme.

The restaurant's focuses on Chinese-inspired dishes, like "Leftover Lo Mein," and "Salt and Pepper Wings," along with other menu highlights, including Clams & XO featuring bucatini pasta and scallion; Tiger Salad with cucumber, verdant veg, and herbs; Lebanon Bologna Fried Rice; and a selection of ice creams for desert.

St. Oner's drink menu includes canned beer from the brewery's own line, as well as kombucha, Mexican Coke, and fancifully named cocktails, like the Deadly Petals with Strange Powers made with vodka, herbal syrup, citrus, and ginger sichuan peppercorn.

The modern twist on Chinese cooking and youthful atmosphere is reminiscent of NYC's Mission Chinese, which is located in Bushwick, a gentrifying neighborhood not unlike Fishtown.