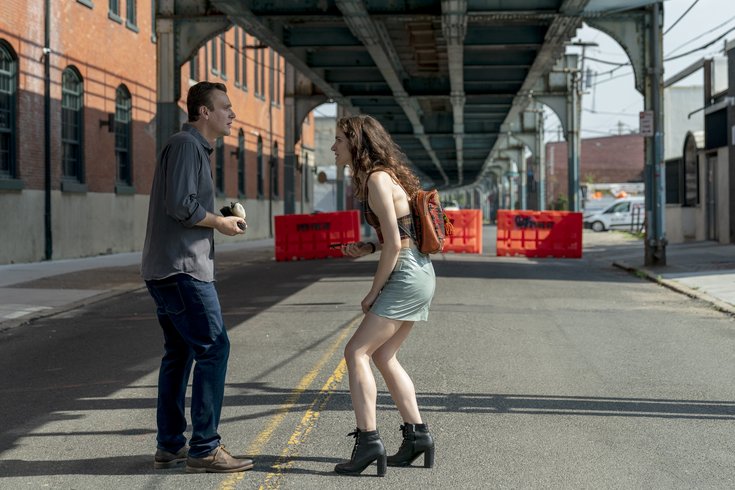 Jason Segel stars as Peter in his new AMC series 'Dispatches from Elsewhere' premiering March 1. The actor talked about the show after an advanced screening of Episode 1 in Philadelphia on Feb. 28, 2020. Above is a scene from the show with Segel and Eve Lindley

Jason Segel's AMC show "Dispatches from Elsewhere," which was shot in Philly, opens with Richard E. Grant's character Octavio Coleman, Esq. in front of a bright orange wall staring out at whoever is watching.

It's weird. It makes you laugh. And it sets the tone for the rest of the pilot episode.

Segel plays Peter, a guy who works for a Spotify-like company based in Fishtown, sticks to a daily routine, barely interacts with anyone and knows his therapist thinks he's boring.

But Peter is tired of a life of merely existing, which is why when he sees a street flyer for the Jejune Institute, he calls the number. 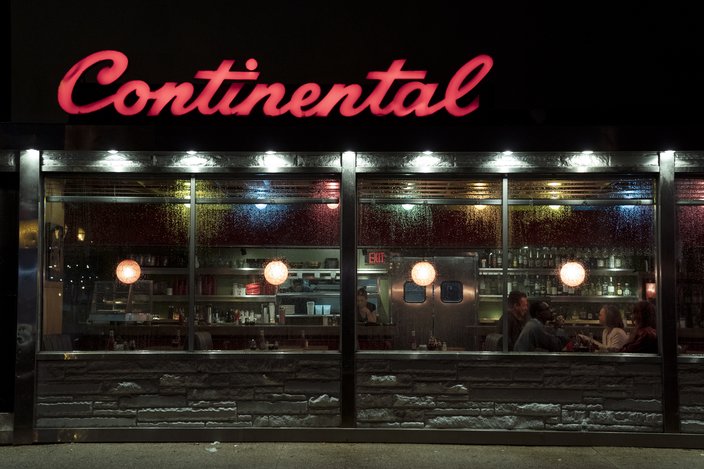 Stephen Starr's The Continental in Old City makes an appearance in Episode 1 of 'Dispatches from Elsewhere.'

He heads to the organization's headquarters, which many Philly viewers will recognize immediately as the marble-floored Curtis Center atrium in Old City. Rittenhouse Square Park and Stephen Starr's restaurant The Continental in Old City also are prominently featured in the first episode.

Leaving the atrium, Peter is introduced to Octavio – who's possibly evil – and things get a lot more interesting for our protagonist.

During a conversation at the Comcast Technology Center in Center City on Friday, following a screening of "Dispatches" first episode, Segel explained how he learned of the real Jejune Institute from a documentary. The Jejune Institute was a social experiment, also described as an alternate-reality puzzle game, that took place in San Francisco between 2008 and 2011 and sent thousands on scavenger hunts.

RELATED: Jason Segel's 'Dispatches from Elsewhere' is about a real multiplayer game with cult following

The actor – known for movies like "Forgetting Sarah Marshall" and the TV series "How I Met Your Mother" –  knew quickly he wanted to create a project based on it.

"I was alive with excitement to write it and I got ahold of the creator of the experiment," Segel said. "I pitched him my idea on the phone and he said, 'Nah, I'm good.' And he hung up on me."

"A month later I got an email with a time and a location in San Francisco. I walked in and they said, 'We've been expecting you Mr. Segel,' and the next day I was put through (something similar to) the induction that you see in the pilot."

Only then was Segel given the go ahead to create "Dispatches." Grant was the first person he cast, followed by Eve Lindley, who plays Simone. In the pilot, Peter meets her after his induction to the Jejune Institute, and they soon add Janice (Sally Field) and Fredwynn (André Benjamin, aka André 3000) to their team. 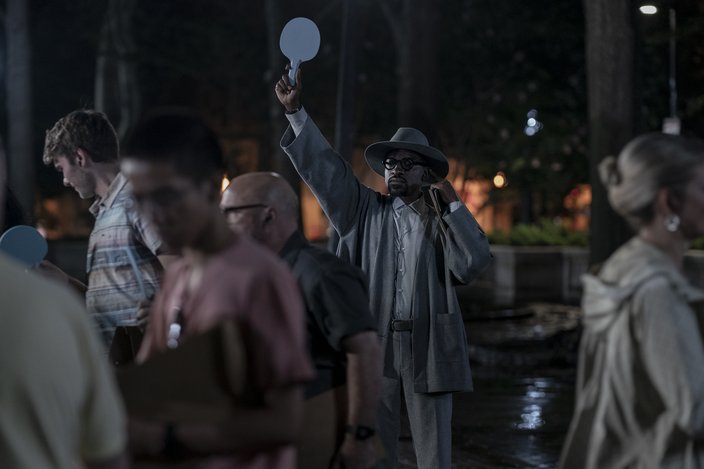 André Benjamin plays Fredwynn in 'Dispatches from Elsewhere.' He meets Peter in Rittenhouse Square then shortly after reveals he thinks they're part of a government conspiracy.

"Everyone told me I would never get André. You might not even get him on the phone. And he read the script and the first thing he said to me was, 'I'm all in,'" said Segel, who also shared he often would hear Benjamin "fluting" through Philly on nightly walks.

The script was re-written for particular locations around Philly, which Segel calls "one of the most beautiful cities in the world." It also was written to be challenging.

"This sh**'s really complicated, this first episode, but that's kind of a good thing. That was the intent. It's not spoon-fed to you," said Mark Friedman, the series's showrunner, who joined Segel and Lindley on stage at the Comcast Technology Center.

While it would be unfair to give away all the odd surprises that happen in the pilot, there are two scenes that must be talked about.

During one, Peter is called and told to go out in the rain to a pay phone. There, he gets instructions to dance and he awkwardly obliges. From around the corner comes a breakdance team and their boombox to join his party of one. Next, someone dressed as Bigfoot joins in and hands Peter a package, dispersing the impromptu gathering.

"That's part of what happened in the real social experiment," Segel said. He explained it demonstrates to someone who feels stuck in their everyday life that unexpected, wonderful things could be around any corner. "When I watch it, I'm like this is really weird, but I'm proud of it."

The other scene that stands out involves Simone after she leaves Peter, Janice and Fredwynn at The Continental. It's late and as she's walking home alone, two shadowy figures start following her.

As we watch the scene unfold, the show rewinds, the screen splits between a scene that has already taken place and a cartoon depicting it.

"There's something about the juxtaposition of that cartoon and the assault on Simone that I think forces you to evaluate how flippantly a scene like that is used in movies and in storytelling," Segel said. "One of the real goals of all the episodes was to force you to pay attention by doing things that I hadn't seen on TV."

The quirky 10-episode series may not be for everyone but it's almost guaranteed to be unlike any show you've seen so far. And for those in Philly, it's worth watching if only to spy all the locations incorporated throughout the city.

"We are all up in this jawn," Lindley said on Friday afternoon, proving the actors definitely embraced Philadelphia while filming here.

They even had some favorite restaurants, including Vernick, Suraya and Zahav.

"I tried to keep it together because the show takes place over three weeks so you can't gain like 40 pounds, but around Episode 9, I was like there's not enough time for me to get that fat and I went Federal Donuts wild," Segel joked.

AMC's series "Dispatches From Elsewhere" will premiere Sunday, March 1 at 10:08 p.m., after the midseason premiere of "The Walking Dead." After, the show will air Monday nights at 10 p.m. There will be 10 episodes.