The latest trailer is packed with recognizable Philadelphia imagery; The series premieres March 1 on AMC 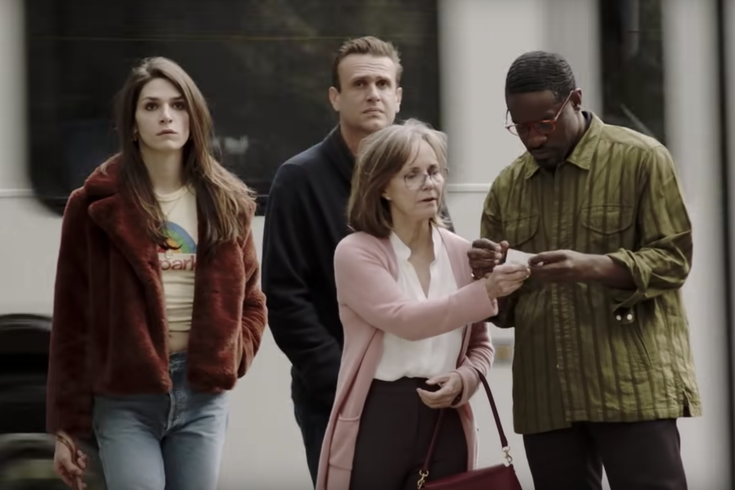 Jason Segel, middle behind Sally Field, produced and stars in the upcoming AMC series 'Dispatches from Elsewhere,' which was filmed in Philadelphia. A full-length trailer recently was released for the show with a plot that reportedly is similar to an 'alternate-reality puzzle' game that was popular in San Francisco beginning in 2008. With Segel and Field above are co-stars Eve Lindley, left, and Andre Benjamin, right.

AMC released the full-length trailer earlier this month for "Dispatches from Elsewhere," Jason Segel's new anthology series with a star-studded cast that was filmed in Philadelphia.

Like the short teaser released in November, the new footage features more familiar city spots. In one scene, Segel, Field, Benjamin, and Lindley meet to talk in The Continental diner, and in another, Segel and Lindley discover a clue in front of the Fishtown mural.

Until now, many had been confused as to what "Dispatches" was exactly about. For a show that's been talked about since 2018, very little is known about the plot of the sci-fi mystery show – other than the fact that Andre 3000 will be playing the flute at some point.

But now, Gizmodo has reveals "Dispatches" is actually based on a real thing. A cult-like event that swept up thousands of people living in San Francisco is the subject of the upcoming show.

From 2008 to 2011, more than 10,000 San Franscicans became enraptured by a game created by a company named Nonchalance. (Note in the trailer, Richard E. Grant's character announces "You are all now agents of Nonchalance.") The game was a type of "alternate-reality puzzle" created by an artist named Jeff Hull, who ran the company.

Players of this game with a cult-like following focused their attention on a fictional body named "The Jejune Institute," whose name also appears early in the trailer. They were instructed to complete a series of puzzles and social experiments.

Some of these experiments were focused on the "disappearance" of a girl named Eva – in "Dispatches," Segel and the cast search for "Clara."

Segel is not the first of the film industry to tackle this story, and a documentary about the event, "The Institute" was released in 2013. Vice reported on the cult-like language of the game, which used a combination of spiritual language and gaming to entice the then-emerging American tech capital.

Season 1 of "Dispatches from Elsewhere" will be 10 episodes, with the first premiering March 1, and the second episode airing March 2.