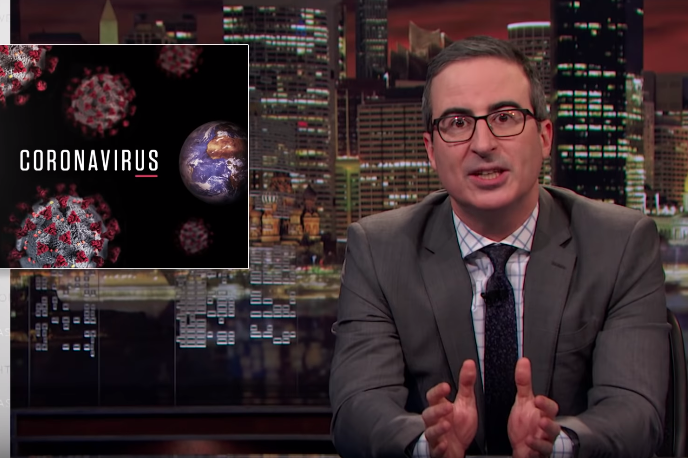 John Oliver took a deep dive into the coronavirus outbreak during his main segment on "Last Week Tonight," tackling governmental responses, crock cures and public fears as he answered a simple question – how worried should you be?

On the same episode in which he ripped the Phillie Phanatic's new look, Oliver chided people for trying to prevent coronavirus infection by gargling bleach.

Is that really an effective remedy, the comedian wondered? The answer is a resounding no. Or, as Oliver put it, "As they say, being dead is already the best medicine."

The virus killed two people in Washington over the weekend – the first deaths reported in the United States. New cases also were reported in Florida, New York and Rhode Island. There are now 43 U.S. cases – plus another 48 repatriated Americans with the illness – according to the Centers for Disease Control and Prevention.

A Harvard epidemiologist predicts that 40% to 70% of the world's population is likely to be infected this year. But as Oliver noted, "There's only one infectious disease that two-thirds of the world should be getting right now ... and that's Adam Driver fever."

MORE: John Oliver has beef with the Phillie Phanatic's redesign and newly-shaped snout

At a press conference on Wednesday, Trump tapped Vice President Mike Pence to lead the U.S. response to the virus — failing to acknowledge that Health and Human Services Secretary Alex Azar remains chairman of a task force overseeing the same response.

Trump also attempted to downplay the virus by repeatedly saying it could go away in April. Some viruses, like influenza, wane during the summer months, but Oliver noted they often return come fall. He pointed to the 1918 flu pandemic, in which the flu returned with a vengeance.

So, how worried should you be?

"A bit," Oliver said. But he stressed that keeping a "sensible balance" is key.

"If you're drinking bleach to protect yourself right now, then you should probably calm the f*** down. If you are licking subway poles because you're sure nothing can hurt you — maybe don't do that. You want to stay somewhere between those two extremes. Don't be complacent and don’t be a f***ing idiot."