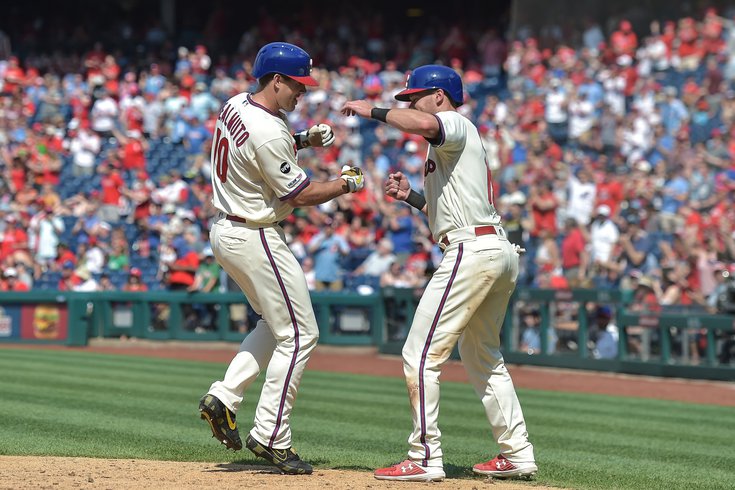 The Phillies are pretty set at the catcher position.

Let's take a look at catcher...

Realmuto is not only arguably the best catcher in baseball — both with the bat and with the gear on — he is also a shining example of durability at the position, having started an incredible 674 of the first 972 MLB games (almost 70%) he was on a big league roster since his rookie year. The Phillies are very optimistic their backstop will be able to start on Opening Day, despite a setback with a broken finger that has so far kept him from playing in spring training.

However, there could be a little more work for Andrew Knapp early in 2021 as Realmuto will be a little late at getting up to speed in spring training. Knapp is a suitable backup who had sort of a breakout year filling in for Realmuto, who was slowed down by an injury at the tail end of last year's shortened slate of games.

Realmuto has been an All-Star, Silver Slugger and Gold Glove winner, and at 29 (he will be 30 in a few days), the slugging catcher will remain in Philadelphia through 2025 after inking a monster five-year, $115.5 million deal — the biggest ever for a catcher. He is a long shot NL MVP candidate with +2000 odds, the 11th best of any player according to Pa.Unibet.com. As a whole, from top to bottom the Phillies may feel better about catcher than any other position in their entire franchise.

It would be extremely hard to argue that Realmuto is not the best catcher in the division this season — though New York certainly did upgrade in signing James McCann this offseason. Here's a look at the catching landscape in the NL East for 2021:

Aside from perhaps d'Arnaud, who had his best season ever in 2020, there are no real statistical threats to Realmuto's NL East catching supremacy.

Interestingly, the Phillies are chock full of catching talent — a rare bright spot in their otherwise depleted farm system. Two of their top 27 prospects, according to Fangraphs, are catchers.

The first of these is Rafael Marchan, a 22-year-old who is in spring training right now and made a brief MLB debut in 2020. He is very close to being big-league ready and projects as a starter at the highest level. He could be a key trade chip in a near future deal with Realmuto signed for several years.

The second battery man prospect is Rodolfo Duran, a 23-year-old athletic catcher who has a ton of potential particularly in receiving pitchers. He will need to work his way through the minor league system a bit more before he becomes a high profile talent.