Phillies positional preview: Who will round out bench? Will it be a strength? 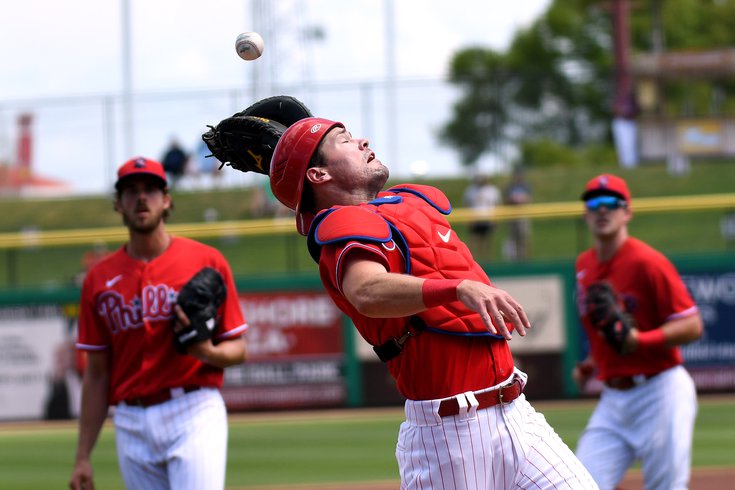 Andrew Knapp will once again be the No. 2 behind J.T Realmuto behind the plate.

Among the biggest battles this spring in Clearwater — in addition to what appears to be a down-to-the-wire fight to start in center field — is the push to prove worthy of being added to Joe Girardi's bench in 2021.

Last season, Girardi more or less kept 13 pitchers on his 26-man roster. If we subtract the starting eight from that, it leaves the Phils with a five-man bench. That's the number we'll use as a jumping off point.

We'll break form for this preview section, as we have a lot of ground to cover.

An MLB bench is important for two reasons. One, a 162-game season is grueling and depth is always important. Even Bryce Harper needs a day off (he had just five of them in the last full season, in 2019). In addition, though, pinch hitting has never been more important as the three-batter minimum gives a big advantage to offenses.

Last year, the Phillies pinch hitters were among the most reliable in the league — though they did lack a bit by way of power.

Phillies hitters off the bench

A lot of the success the Phillies had with reserves contributing late in games off the bench is thanks to great (shortened) seasons from Phil Gosselin, Neil Walker and Jay Bruce, all of whom are no longer with the team. It was also, admittedly, a very small sample size with almost one third of the typical bench opportunities. Would this bench have been as successful over a full slate? We'll never know. We do know that the Phillies are hoping to find similar production from their current candidates.

The bench is more or less set with a handful of players doing their best to make it hard on the Phillies front office staff. The team has already sent some players to minor league camp, like Mickey Moniak and Nick Maton. They could send more over the ensuing week ahead, before games begin in South Philly.

We are also pretty sure that at least two of the centerfield contenders, Roman Quinn, Adam Haseley or Odubel Herrera will make the roster, narrowing our examination to just four slots below.

How will the other bench jobs be handed out?

Knapp had a breakout year in 2020 getting a little extra time on the field with J.T. Realmuto hurt at the end of the season. He is a lock to be the backup this season, especially after the team granted Jeff Mathis his release earlier this week.

Back for his second stint, the Phillies paid handsomely for Miller and will be relying on his veteran leadership and versatility.

Joyce is a veteran corner outfielder with pop who as dominated this spring, hitting .320 and is playing well in right field. He has made a real solid case and could convince Girardi to carry five outfielders (Bryce Harper, Andrew McCutchen, two centerfielders and Joyce).

Torreyes is one of those veterans who will likely wield a light bat, but could play all over the field. He has gotten a lot of at bats in spring training, the third most of any hitter.

Maybe the Phillies decide to go a different direction and give someone lower on the radar a chance. Here are a few guys with a heartbeat left to get a crack at making "The Show."

Hall is a 25-year-old power hitting prospect who has hit .281 in 20 games this spring. He may be a player called upon later this season, should there be an injury.

Jankowski is a journeyman outfielder with a lot of MLB experience. Barring a last week push he may be stowed away in Triple-A.

Williams had a great spring training last year but with no minor league season, he dropped off a bit. He has talent but hasn't seized the opportunity in camp hitting just .226.

Stott is one of the Phillies top prospects and a recent first-round pick who has been rooming with fellow Vegas native Bryce Harper this spring in Clearwater. He has just two hits in 23 at bats (.087) and is much more likely to get time in Triple-A than he is to start in the majors, wasting an option.

Put Garcia in the same category as Stott, a very talented young prospect getting a taste of major league pitching. He will need another year to learn and develop as well.

With so many moving parts we can't really project or compare, accurately, the benches of the teams in the Phillies' division. That being said, here's a look at a player or two who will likely be in each of the four other team's dugouts.

Knapp will be entering arbitration next season, and is likely to remain with the team unless they turn to a prospect as a backup, like Rafael Marchan. The rest of the likely bench pieces for the Phillies in 2021 will be coming off the books at the end of the year. Will the team give some home grown players more of a chance with backup roles in the years to come?

It seems likely that there will be little movement at least before 2022, with so many of the team's principle offensive players under contract going forward.