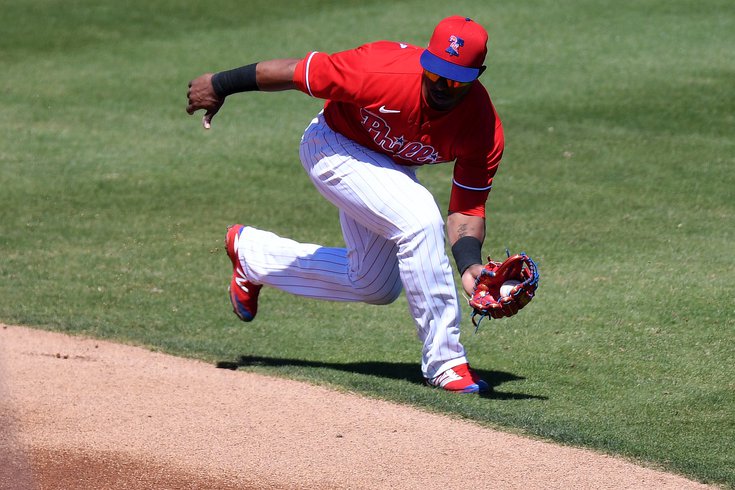 Philadelphia Phillies infielder Jean Segura fields a ground ball in the third inning against the New York Yankees during spring training in Clearwater.

Let's take a look at second base...

When the Phillies traded for Jean Segura a few years ago, they thought they were getting a player capable of playing multiple positions who could lead the league in batting average, get on base a ton, steal bases and be a lightning rod on offense.

What they got was more of a slightly above average infielder with a little pop, but who is probably not playing up to his $14 million a year salary.

In 2016, Segura led the National League with 203 hits, in a league high 637 at bats. He also had a career-high 20 home runs. In 2018, the year before he came to Philly, he was an All-Star. But, in each of the last five seasons Segura has stolen fewer bases, scored fewer runs and hit for a lower average while his home run totals are slipping under double digits.

Even if you multiply his stats by three in a shortened 2020 season during which he played only 54 games, you get six stolen bases and 84 runs scored. Where is Segura's production?

Well, part of it, according to the man himself, is a simple change in approach to keep up with a change in the game.

“As a baseball player, the game changed right now,” Segura told media members (via Inquier.com). “You need to get on base. You need to create opportunities to score runs. For me, I can put a lot of balls in play but probably that ball that I put in play is going to be an out. I can sacrifice that contact rate to take pitches, battle an at-bat, maybe take a walk, and create an opportunity for the team to score runs. That’s what gets you some wins in a ball game.”

There are some really strong positional groups in the NL East this season, but second base isn't one of them. Segura is the best player projected to start by career WAR, with veterans Starlin Castro and Jeff McNeil each returning to the Mets and Nats respectively with proven track records. Ozzie Albie is immensely talented and still just 24, and probably has the best chance of breaking out of anyone in this group. The Marlins will likely give former stud prospect Diaz another chance in the starting role.

For what it's worth, Albies has high expectations for 2021, and is listed as the top fantasy baseball second baseman by Fantasy Pros. McNeil is 9th and Segura is 15th.

The Phillies have Segura under contract for the next two seasons, and hold a team option for 2023. There were rumors this offseason that proved not to be true that the team was shopping Segura, when many feared the team was selling and not buying. Regardless, Segura is here to stay and is blocking any potential prospect who is looking for a spot in the infield.

Fortunately (or unfortunately), the team really has no second baseman in their pipeline, aside from Jamari Baylor — the only natural 2B man among their top 40 prospects. Baylor is 20 and was a third round pick in 2019 who suffered from a lack of minor league action last year due to the pandemic. He is immensely talented and has some really good skills with the baseball bat and is a name to watch.

With utility-man Scott Kingery able to play second base pretty well, and with a bunch of other prospects waiting in the wings at shortstop — like Bryson Stott — the Phillies have flexibility in their infield should a player emerge worthy of a job from the farm system.