Phillies positional preview: Andrew McCutchen is probably a stopgap in left field — but for who? 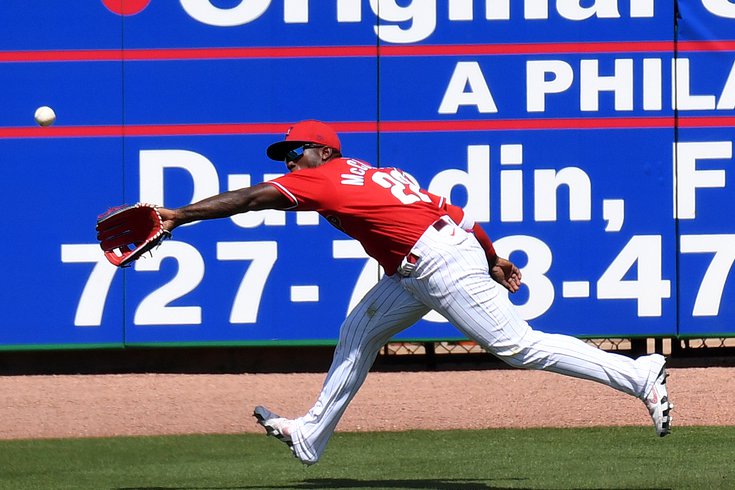 From 2011 to 2015, McCutchen was an All-Star five years in a row, was the 2013 NL MVP with two other top three finishes, won four Silver Sluggers and a Gold Glove in Pittsburgh. In those five seasons, he was a different player than he is today — perhaps the best in baseball.

In the years since, with the Pirates, Giants, Yankees and Phillies, he has been a much more down-to-earth kind of player. He's certainly a worthy starter in the big leagues, but at 34 years old, he is clearly in decline.

McCutchen bounced back from his torn ACL and played in 57 of 60 games in the shortened 2020 season, which is a definite positive that he is not injury-prone and his setback in 2019 was just bad luck. The Phillies are no doubt hoping to get one more solid season from the aging former superstar, somewhere in the neighborhood of 130-140 games, with their outfield reserves and backups a bit lacking.

We'll get more into the depth behind him and his contract situation a bit later, but for now, the Phillies have their everyday left fielder and the veteran leadership McCutchen offers could potentially be just as valuable as hit bat this season.

The NL East boasts a top MVP vote getters in the NL last year in Marcell Ozuna and then a quartet of older veteran hitters in Andrew McCutchen, Corey Dickerson Kyle Schwarber and J.D. Davis. Schwarber was a big pick up for the Nationals and a source of some much-needed power. Cutch is likely in the middle of the pack here.

McCutchen has a $15 million option for the 2022 season, and while there hasn't been any indication given either way, it seems reasonable that unless Cutch has a season for the ages, the Phils may elect to go younger and allocate that cash elsewhere.

In the short term, Scott Kingery can play in the outfield and Roman Quinn and Adam Haseley are on the roster, vying with others to play center in 2020. While any of them could find a few starts in left field, none of them sound like upgrades for McCutchen in the longterm. Which is why the Phillies are hoping, and praying, that a prospect emerges worthy of playing the outfield in the majors.

Mickey Moniak is certainly an option, who has flashed some talent in spring training and as a former first overall pick, may get his chance to play every day in 2022. Another highly touted sleeper prospect who plays the outfield is Johan Rojas, a 20 year old from the Dominican Republic who has many excited about his defensive ability and bat skills — his lack of walks is a rare weak spot.

Both Moniak, Rojas and other top outfield youngsters like Simon Muzziotti and Yhoswar Garcia play center, and centerfield is a glaring need for the Phillies that is another spot they'll be hoping to find a longterm homegrown contributor for.

As for a corner outfield spot, the Phillies are really lacking — as is the open market. Michael Conforto, Nick Castellanos, Jackie Bradley Jr. and a bevy of over-30 veterans highlight a relatively weak potential free agent field of outfielders.

Bryce Harper is really the only known entity going forward for the Phillies outfield. If they can't get a homegrown everyday player — or two — in the next 18 months, they may be in some serious trouble long term. Which means that McCutchen, who was signed to be a bridge to the new generation of Phillies outfielders, is still waiting for his predecessor to emerge.