Phillies positional preview: Bryce Harper is the anchor of the Phillies 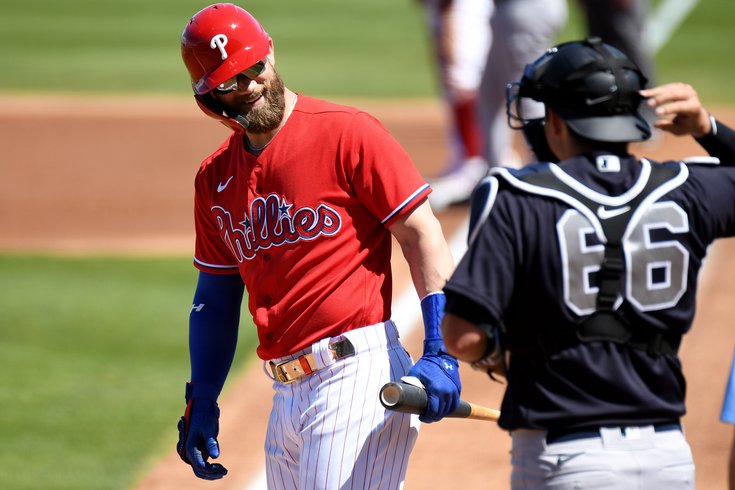 Bryce Harper's power was down a little bit last season, as his 13 homers (25th in MLB) and 33 RBI (44th) were not at elite levels during the shortened 60-game 2020 season. But he did show a new facet to his game that will certainly make manager Joe Girardi excited — he cut down on strikeouts.

After tallying the fourth most strikeouts of any MLB hitter in 2019 (178 of them) and the eighth most in 2018 (169), Harper showed elite plate discipline in 2020, leading the entire majors in walks with 49 in 58 games, an eye-popping pace that would translate to more than 132 walks over a full season, more than his league-leading total from back 2018. And he did this while not offering an excessive amount at bad pitching — he was wrung up only 43 times in 2020, a total that puts him 110th of all qualified players, a season after finishing in the top 5.

If that continues, it will pay huge dividends across the Phillies' lineup, with a roster that has power throughout. Harper has speed on the bases and a great arm in right field. His power should be fine in 2021, with his nagging back from a year ago healed. Pa.Unibet.com is quite confident in that fact, as they give him a +2000 chance of leading the majors in home runs hit — 11th best in the league. And if Harper can walk, hit for power, limit his strikeouts and remain a catalyst on defense, Harper should be well on his way toward a seventh All Star Game, and potentially a second MVP (he has the 10th best chances at that, according to Pa.Unibet.com with +1500 odds).

Harper brings energy and leadership to a Phillies roster that is hoping it can surprise some this season, building off an impressive offense a season ago.

The NL East is absolutely, positively loaded in right field. In fact, it wouldn't be a stretch to say that Harper might be the third best at his position in his own division. There are three MVP candidates in the region, in Harper, Ronald Acuna from Atlanta and Juan Soto from Washington. Plus, Michael Conforto in New York is a mashing home run hitter who could lead the league in dingers.

Three of the top four fantasy baseball right fielders, according to RotoChamp (and to pretty much everyone else) are in the NL East with Acuna, Soto and Harper ranked first, second and fourth respectively — with Mookie Betts slotting in third.

The Phillies don't have a lot of minor league talent in the outfield — which is a pretty big problem with regard to the future of team for left and center, but as far a right field, Harper is here to stay.

The superstar is entering the third year of a 13-year contract that will have him in red pinstripes for another decade.