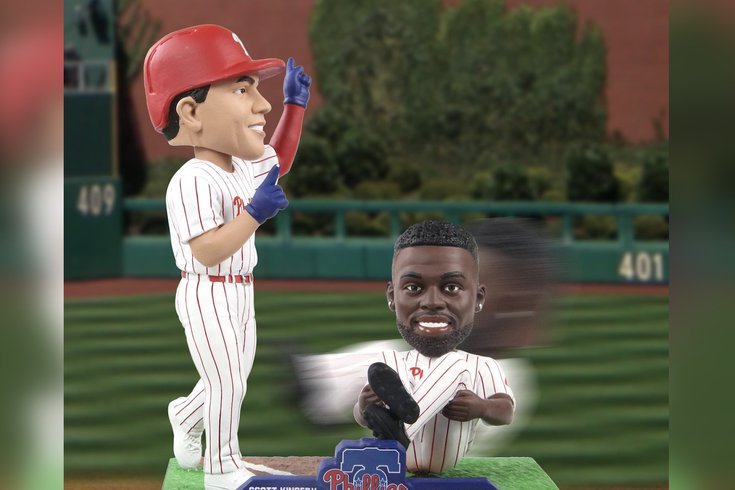 Phillies fans who are getting ready for the 2021 season to officially begin next week can now purchase a piece of memorabilia commemorating one of last year's finer moments.

The handcrafted and hand-painted bobblehead portrays one of the Phillies' more memorable moments of the shortened 2020 season.

As Kingery arrived at home plate doing a little celebratory jig and his teammates circled him to perform a socially-distanced celebration, McCutchen started break dancing in the dirt behind home plate.

McCutchen's bobblehead figure can spin around on top of the base. The Phillies logo and "Ring The Bell," as well as both players' names, are imprinted across the front.

"Ring The Bell," of course, is in reference to the digital bell out in centerfield at Citizens Bank Park that lights up and rings after every Phillies' home run and win. Additionally, both figures are wearing the Phillies' red pinstripe home jerseys.

Standing about eight inches tall, the bobblehead costs $60 and will ship to customers at the end of June.

The company, however, has only made about 220 of these limited-edition bobbleheads. Therefore, customers can buy no more than four bobbleheads per order in an effort to get the product out to as many fans as possible.

The Phillies open up the 2021 MLB regular season at home next Thursday afternoon against the aforementioned Braves.