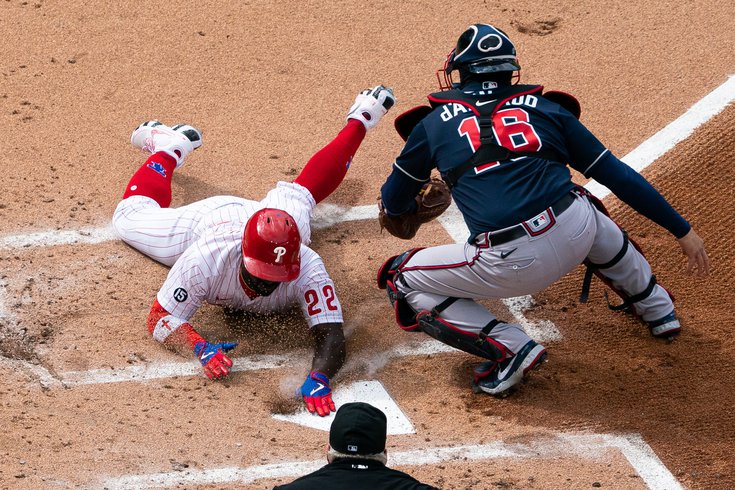 If nothing else, Thursday's season opener at Citizens Bank Park was entertaining.

With fans back for the first time in 18 months, the Phillies looked poised to cruise to victory over the NL East favored Braves before a tie game late set up an eventual walk-off single from Jean Segura for a 3-2 win on the last swing.

The game, which meandered into the 10th, saw Bryce Harper moved to third base and eventually brought home with a Segura bullet into shallow left.

We have 161 more of these games to go, so we won't waste any more of your baseball consuming brain. Here are three (plus a few stray observations) things we learned in a memorable season opener in South Philly:

Patience is a virtue

With sluggers like Bryce Harper and J.T. Realmuto in the lineup every day, there will be times when the Phillies are must-watch, exciting and dynamic entertainment. But there are other times when they'll be slow, deliberate and patient, and it's these times that are worth feeling good about, particularly after Thursday's win.

In the top of the first after a leadoff single, Harper worked the pitch count to turn an 0-2 start to a walk, and Realmuto joined him to load the bases with a hit by pitch. Alec Bohm hit a fly to shallow left to drive in the Phillies first run of the season.

Quick hits are great, but having Braves ace Max Fried at 64 pitches after three innings is pretty great too, and it's something the Phillies hope they can do throughout the season, working pitchers the way they did early in this one.

A second run came, once again, after the Phils patiently worked the count, got a pair of hits in the third and Realmuto was able to drive in Rhys Hoskins on an RBI-single — giving Philly a 2-0 lead.

Last year, during the shortened 60-game season the Phillies were toward the bottom of the league seeing just 3.92 pitches per plate appearance. For a team built like this one is, that number being higher can only mean good things going forward.

Things changed later, with the game tied and the Phillies hunting for a run in the seventh, as a quick seven-pitch inning showed the other extreme, when over-aggressiveness and pressing can give the opposing pitching staff a big confidence boost.

And — since we titled this section about patience — those who stuck around at the ballpark or on TV until the 10th inning were treated to a pretty epic throw out at home to keep things tied, with a frozen rope throw from Roman Quinn in center to Realmuto at the plate:

The ultimate reward, of course, came with the walk-off.

Joe Girardi give his ace, Aaron Nola a vote of confidence, sending him back out for the seventh inning after a mostly solid debut six innings (a move in contrast to the controversial one to pull Nola in the same situation made by Gabe Kapler on a previous Opening Day). And with two out and in the seventh he surrendered a double down the line and a two-strike two-run pinch hit homer to Pablo Sandoval (remember him?), costing him a shutout and tying the game.

Nola relishes pitching on Opening Day and you could tell in this Game 1, with the former first rounder and Cy Young runner-up summoning mid-season form in the chilly temperatures. For whatever reason, the Louisiana native is really good early in the year and has been throughout his career. He was good at putting hitter away, pitching to contact and getting out of jams.

His biggest test came in the bottom of the sixth, after an absolutely terrible play by both Nola and Hoskins on what should have been a routine ground out resulted in an error and men on second and third with one out. Nola got some defense from Bohm before his sixth strikeout made the defensive lapse irrelevant, preserving the slim 2-0 lead.

The righty was efficient as well, getting pulled after only throwing 84 pitches. In all, he allowed six hits while wringing up six and set the tone with a quality start for a team that needs a hot start with 13 straight games against the two best teams in the division in Atlanta and New York to start their slate.

To any outside observer, in a vacuum, the Phillies game Thursday — in 47 degrees and the wind whipping, and with just under 9,000 fans in attendance (instead of the more than 44,000 that would be at a typical Opening Day sell out) — had surroundings that were nothing special.

But to anyone who has lived through the past 13 months, that there are fans at all in Citizens Bank Park is just a sight for sore eyes. Boos could be heard. Bryce Harper, upon assuming his usual spot in right field, bowed to the sparsely populated lower level outfield stands and then gave them a ferocious yell of "lets go." Andrew McCutchen's leadoff single brought with it the kinds of cheers that you'd expect from a packed house. Even the ball boy who sprinted onto the field to pick up some wind-encircled napkins got an ovation from the Philly faithful, thankful as ever to have nothing between them and their beloved hometown team but air.

Speaking of Harper, he also wore these when he was introduced.

Anyway, baseball is back and the Phillies have a little juice to them this season. And for a city (and world, frankly) ailing to get back to normal, perhaps having a ballgame on every single day this summer will be a little gift as we work our way out of this mess.

A few other things...

• For all the worries about Alec Bohm at third base, he played a really solid game in the opener, making two impressive catches in foul territory on pop ups that were no easy grabs thanks to some prevailing wind. More impressively, he made a highlight, run-saving catch to help Nola get out of a bind in the sixth.

The perks of being tall are endless.
pic.twitter.com/REPyahXW5Q

• Didi Gregorius saw Bohm's catch in the sixth and decided he could top that. And he did. In the ninth. And it was pretty awesome.

that was an amazing catch

• Speaking of that wind, both Nola and Fried got bailed out a few times on deep fly balls that would have been homers on a calm July day.

• It's likely that this will be the final Opening Day, maybe ever, that features pitchers hitting and at least for this lifelong baseball fan it was nice to see Nola execute not one but two excellent and successful sacrifice bunts.

• This lifelong baseball fan also sees the irony that this game was really freaking long. It was well past the three-hour mark before the ninth even began (and it was a 2-2 game!). I have no idea how to fix it but yeah, these games are way too long.