Kevin Cooney: Some Phillies Do's and Don’ts heading into a new season

Now that the Opening Day roster is set, this feels like a good time to get reacquainted with what the Phillies are—and are not—in 2021 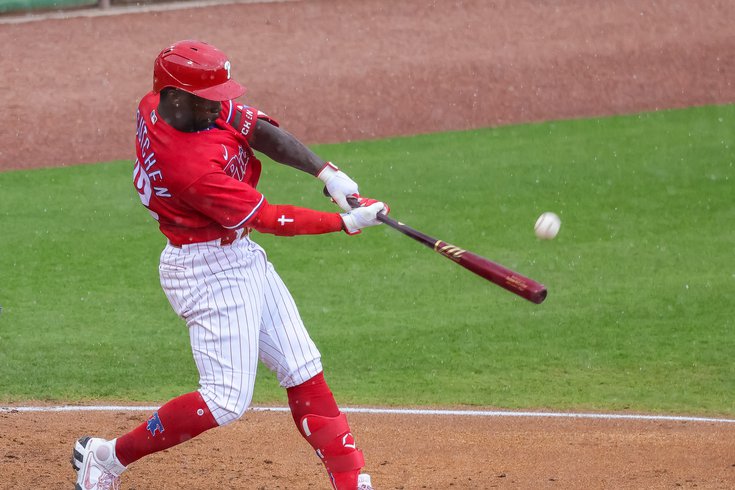 Andrew McCutchen looks poised for a healthy, productive season in 2021.

It seems so long ago to remember the last time that the Phillies had an honest to goodness Opening Day when the baseball Gods wanted it — somewhere in the chilled and freezing weather of late March and early April.

Bryce Harper had just arrived in town to a heroes welcome. Gabe Kapler was the manager that had everyone wearing a quizzical look on their faces about. Matt Klentak was being hailed as a generational general manager by John Middleton. The Phillie Phanatic didn’t have weird things hanging off his arms.

And yet, here we are again — back at the start line of sport’s most grueling scheduling marathon of 162 games in 180 days. The rhythms of our lives are slowly being restored. And pretty soon, radios at the shore will be turned to Franzke, LA and Frandsen and sports talk hosts will — well, they’ll be talking Howie Roseman because that’s what we do here in town.

No expert can ever see what is coming in a baseball season — no matter how much we think we might. But the years have taught us what to expect as a guiding light on how a season may go. With that in mind, here is just one man’s observations on what to get excited about – and brace for — with the 2021 edition of the Phillies.

DO enjoy the combo of Bryce Harper and J.T. Realmuto in the middle of the lineup

Combined, these two will be the heartbeat of franchise for the next five years. No matter what happens around them, you could probably expect somewhere around 60 combined homers and roughly 200 RBI between the both of them during most of that time if injury doesn’t become a factor. In reality, you could make a case that the tandem will likely end up as good as any mid-lineup back-to-back combination that the Phillies have put out there in the modern era dating back to 1970. Mike Schmidt/Greg Luzinski and Chase Utley/Ryan Howard are the gold standards when it comes to combinations. This tandem has a chance to get to that level. However….

DON'T overstate what the lineup is

On paper, it’s fine. Last year’s short season provided some gaudy numbers – top 10 in the sport in batting average (.257-9th), OPS (.781- 7th), runs (306, T-5th) and RBI (289- 7th). But the problem that the Phillies have had over the years is the unequal nature that it seems like they’ve hit with — often piling up huge games and then being silent for the week. There are issues here: Can Rhys Hoskins bounce back? What exactly is Jean Segura at this point? Will Alec Bohm go through some sophomore growing pains? Yes, the Phillies should hit. Can they hit well enough to be consistent, however, is the big question. Speaking of which…

DO worry about the infield defense

One of the stories that went under the radar last year with the bullpen’s epic failure was how truly brutal the Phillies were defensively in the short season. Philadelphia committed 23 errors from first, second, short and third last year in just 60 games. The Phillies four projected starters this year — Hoskins, Segura, Didi Gregorius and Bohm — had a combined defensive WAR of minus-0.4. The Phillies may be better with their pitching, but testing it with extra outs will result in a disaster.

If McCutchen was the most important guy in the Phillies' lineup like he was for the Pirates in 2012, then the decline in production that took place after his knee injury in 2019 would be worrisome. (McCutchen was a -0.5 WAR in 2020’s shortened season.) At this point in time, McCutchen is an ensemble player who is critical in leadership within the clubhouse. You need guys like that to win. It is reasonable to think he gets a few extra days off during the season than a normal regular starter. But he’s still a good player and good presence.

DO expect the bullpen to be better

In reality, it couldn’t be worse than the historically bad one that was here last year. It will still have moving pieces with closer and perhaps some guys moving into spots in the back of the rotation. If it goes to mediocre and the Phillies have a bullpen equal to their 2019 numbers — 16th in ERA at 4.38, 19th in WHIP at 1.39 — then take it as a win and a massive improvement.

Zack Wheeler was good last year for most of the season, but the slow starts in his career in April (6-7, 4.53), May (6-7, 4.58) and June (3-11, 4.67). When you add that and the still uncertain nature of Zach Eflin (good third starter, still hasn’t had a full breakout year), Chase Anderson and Matt Moore – there is a reason to hold your breath about the rotation. It has high upside, but it could crumble just as easily in a tight division.

DO pay attention right from the jump

If the Phillies weather April and the first two weeks of May’s schedule, well, they should be in good shape. By the time May 16th rolls around, Philadelphia will have faced the Braves nine times and completed two of the three trips to Atlanta; faced the Mets 10 times, finished the seven-game season series against the Cardinals (perceived NL Central favorites with Nolan Arenado) and wrapped up a nine-game road trip that will include Atlanta, Washington and Toronto/Dunedin/Buffalo, who could be an AL Wild Card team.

No matter what combination of things came back on the charter from Clearwater on Monday night, it is pretty fair to assume that spot has to be the top priority for Dave Dombrowski among the everyday lineup. Expecting that Roman Quinn, Adam Haseley, Mickey Moniak, Scott Kingery or Odubel Herrera can plug into that role and suddenly make it all better is just wishful thinking. Dave Dombrowski, Sam Fuld and the front office will probably be looking out for any potential trade targets for center through most of the summer.

DO trust the new management

After a decade of missing the playoffs, it’s easy to be cynical about the franchise and its direction. The biggest difference this year compared to last is the men manning the wheel of the franchise. Dombrowski is an old pro with a few rings to his name, Fuld is one of the brightest young minds in the game that is respected across the board by both analytic people and old school scouts. And considering the mess of a bullpen he had last year, Girardi did a good job getting this team to the last day of the season. The right men are in charge now.

Facts are that the Phillies are probably in the best spot they’ve been in as a franchise since they made the playoffs last in 2011. If there was a seven- or eight-team playoff, I would feel pretty confident that they could grab a postseason berth and potentially even win a round. However, the five-team, two-wild card format in play could make things very difficult for Philadelphia to enter the postseason given the depth within the division and the likelihood that either San Diego or Los Angeles will claim one of those wild cards with 93 to 98-plus wins. (The rest of the West is dreck.)

So here’s the official prediction. I think the Phillies win somewhere around 85 to 88 games. I think Realmuto has an MVP season. I think there’s clear progress enough to where the franchise has regained the city’s attention. But I think they finish third behind the Braves (92 wins) and Mets (90). (To me, Washington is sliding towards the mediocre abyss.)