The once-promising prospect has regressed during his three seasons in the big leagues. 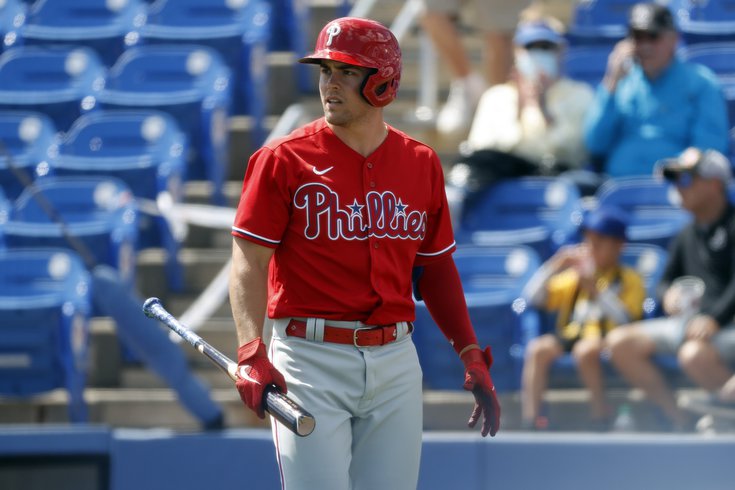 With Opening Day just a few more sleeps away, the Phillies continued to trim down their roster this weekend in preparation for the upcoming season. And among the latest round of moves, there was a surprising name: Scott Kingery.

Phillies have made the following roster moves: pic.twitter.com/q5HK1v16QM

It's just the latest blow in what has been a rough stretch for the 26-year-old utility man. After battling a bad case of COVID-19 last year and struggling to get back into game shape, Kingery had what was by far his worst season as a professional, in which his average fell by nearly 100 points and saw him lose his starting spot at second base. Following a 2019 campaign in which he hit .258 while playing at least 10 games at five different positions, Kingery hit just .159 in 36 games during a pandemic-shortened 2020 season.

And it didn't get any better for Kingery this spring. In fact, it stayed exactly the same, with Kingery also hitting .159 in 44 Grapefruit League at-bats. That left him out of the center field battle — other candidates like Roman Quinn and Odubel Herrera outplayed him considerably — and instead going up against Brad Miller for a utility role on the bench, one he seemed primed to win after Miller went down with an oblique injury. But with Miller returning to the Phillies lineup on Sunday, Kingery was the odd man out.

It's a mighty fall for a player who, nearly three years ago to the day, set a record when he signed a six-year, $24 million contract*, the most guaranteed money ever for a player who had yet to play in a major-league game. And at the time, it seemed like not just a good deal for Kingery, who had been tearing up the minors and continued that run in big league camp that spring, but also for the Phillies, who had locked Kingery down to what would be a relatively cheap deal if he had continued developing at the same rate.

*Kingery currently has three years left for $18.75 million guaranteed, including $4.25 million this year. The deal also has three years of team options, starting in 2024 for $13 million, with a $1 million buyout.

That, however, didn't happen, as Kingery showed improvement from his rookie season in 2018 to his sophomore campaign, before regressing mightily in the second half of 2019, with his batting average falling from .292 before the break to just .230 in the second half. His OPS also fell mightily, from .889 to .710. He was striking out more and hitting for less power.

See, a bad 2020 season wasn't just a result of the pandemic. Kingery's decline actually began a year earlier and simply continued into the 2020 campaign. Catching a bad case of COVID certainly didn't help — nor did the general uncertainty surrounding the entire season last year or the fact that Kingery was dealing with some shoulder and back issues — but some of his struggles could more accurately be attributed to a change in his swing, which was done in an effort to increase his launch angle and put more balls in the air, a relic of the Gabe Kapler-John Mallee school of thought.

The toll of John Mallee’s tenure as hitting coach of this team has done huge amounts of damage to this organization’s biggest prospects.

With those two gone, manager Joe Girardi wanted Kingery to fix his swing this offseason, which also contributed to Kingery's struggles this spring.

Now, it appears the team has decided that it would be best for their former star-in-the-making to fix his swing in the team's auxiliary camp, and ultimately in the minor leagues. And it's hard to argue with that considering how difficult it is to hit major league pitching regularly, let alone when you're trying to install new swing mechanics. Plus, you need at-bats, which he'll be able to get at triple-A.

Given all of that, an argument can be made the the decision to send reliever JoJo Romero to the minors — leaving the Phillies with just one lefty out of the bullpen — was the more shocking move on Sunday. But for most fans, after a promising start to his career that included a record contract, it was likely the Kingery news that was the biggest surprise.

This certainly won't be the last we see of Kingery, who could be back at a moment's notice due to injuries or otherwise. But it does give us more of an indication as to how the center field and bench battles could play out. Here's more from Corey Seidman of NBC Sports Philadelphia:

It looks like the Phillies’ opening day center field spot will go to either Odubel Herrera or Roman Quinn. Quinn was not in the lineup Saturday or Sunday with what the Phillies believed is food poisoning. If he has to miss any time, Adam Haseley could factor into the plans. Haseley returned this week from a groin injury and hit a three-run double Saturday.

It would seem that the Phillies can’t carry all three of Herrera, Quinn and Haseley on the opening day roster because two would be on the bench and they’d also be carrying Miller, Matt Joyce and Andrew Knapp. They’d be without a backup shortstop in that situation, even though Miller has some innings there. This is why Ronald Torreyes could crack the roster as a utility man.  [nbcsports.com]

It's really starting to feel like Herrera is going to be on this roster, and that's not a good look for the Phillies after the former All-Star centerfielder was arrested for domestic violence back in 2019, ultimately costing him the rest of that season and his roster spot in 2020, when the Phillies opted to leave him in the minors before their season was ultimately cancelled. Unable to outright release him without it obviously being for baseball reasons — his play this spring has precluded that from happening — the team's only real options are to keep in on the roster, pay him $10.35 million to play in the minors, or find a trade partner.

Perhaps that last one is the best option, especially after a decent spring in which he hit .255 to go with four home runs in 15 games. Maybe that would open things up for a Kingery return, given that he could add depth at pretty much every position. Of course, that's assuming he's fixed his swing...