The 10 most interesting Phillies storylines this season 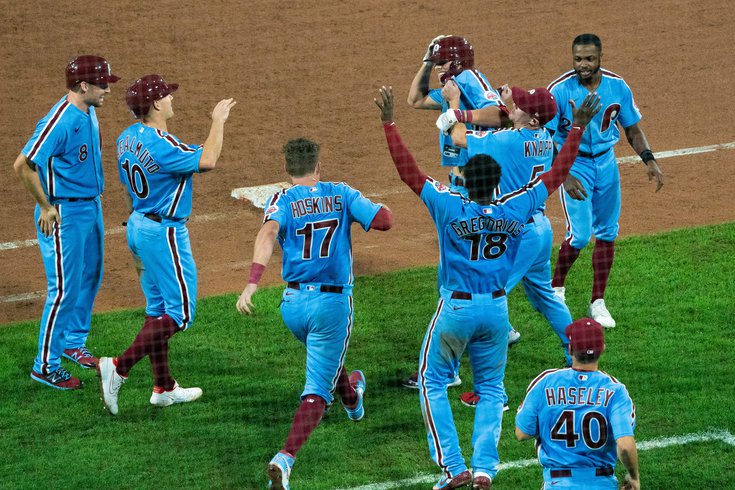 Can the Phillies make things interesting in 2021?

At approximately 3:05 p.m. on Thursday, baseball will return to South Philadelphia. And for the first time in over a year and a half, the Phillies will take the field in front of fans (at least, more than a handful of them hanging on the right field gates).

The Phillies will face the Braves and the Mets twice each (13 games total) to kick off 2021, and we'll have a pretty clear picture early whether the Phils are built to compete in what could be a stacked NL East — more on that later). Their World Series odds aren't great: at +4000 their odds are 15th of 30 MLB teams via Pa.Unibet.com.

So what should fans expect this season? What will the top storylines be for a team that should have higher expectations?

Here are 10 that we'll be focused on all season long:

We should probably start with the Phillies' bullpen, which was the bane of their existence a season ago and has been almost completely turned over in one offseason.

The team is looking to five new pieces in 2021 (and eight players in entirely new roles), with homegrown Connor Brogdon earning a spot in the 'pen, and former starter Vince Velasquez serving as long-man.

The bullpen was last in pretty much every statistical category a year ago. The expectation is this unit will be much better, and should help protect the Phillies' talented and potent offense.

Speaking of that offense, a lot of it will come from Rookie of the Year runner-up Bohm, who emerged as the Phillies top prospect last season and did not disappoint during a condensed 2020 season. Bohm will start at third base this year and the hope, from him and the Phils from office, is that his defense holds up and he can continue to be an anchor for the Phillies at the hot corner for years to come.

Eflin didn't have much pomp and circumstance when he became a part of the Phillies rotation. He wasn't really a prospect people knew about and he kind of organically assumed a role alongside Velasquez and Jerad Eickhoff a few seasons ago and pitched well enough to stay at the bottom of the Phillies' then lackluster rotation.

But the 26-year-old saw his strikeout rate more than double in the shortened 2020 season, and his stuff has been so good this spring that manager Girardi says he belongs in the ace conversation.

“I don’t want to put a limitation on it,” Girardi told reporters (h/t The Athletic). “Because I feel like his stuff’s that good that he could continue to grow and grow and grow. I look at it as, we got a 1A and a 1B and we could have a 1C. I mean, that’s how I feel about Zach Eflin.”

The Phillies have a makeshift center field situation. Roman Quinn, a journeyman known for his speed and for being injury-prone and not much else, is likely to start Thursday in center, and will platoon with left-handed hitting Adam Haseley to start the season. Neither jumps off the lineup card, and each will likely hit eighth for the foreseeable future.

Will the Phillies wind up turning to former All-Star Odubel Herrera, who appears to be slated to play for $10 million this season in Triple-A? Will Scott Kingery (more on him in just a bit) get his groove back and eventually start in center? Or will they make the desperate move to finally give first overall pick Mickey Moniak a chance this summer? There are a lot more questions than answers in center field, which is by far the Phillies biggest question mark for 2021.

Not so great Scott

Scott Kingery shockingly did not make the 26-man roster and will start in the minors this spring. Here's what our Matt Mullin had to say about the super utility man's recent struggles:

After battling a bad case of COVID-19 last year and struggling to get back into game shape, Kingery had what was by far his worst season as a professional, in which his average fell by nearly 100 points and saw him lose his starting spot at second base. Following a 2019 campaign in which he hit .258 while playing at least 10 games at five different positions, Kingery hit just .159 in 36 games during a pandemic-shortened 2020 season.

And it didn't get any better for Kingery this spring. In fact, it stayed exactly the same, with Kingery also hitting .159 in 44 Grapefruit League at-bats. That left him out of the center field battle — other candidates like Roman Quinn and Odubel Herrera outplayed him considerably — and instead going up against Brad Miller for a utility role on the bench, one he seemed primed to win after Miller went down with an oblique injury. But with Miller returning to the Phillies lineup on Sunday, Kingery was the odd man out.

It's a mighty fall for a player who, nearly three years ago to the day, set a record when he signed a six-year, $24 million contract, the most guaranteed money ever for a player who had yet to play in a major-league game.

Will he fix himself and get back to The Show?

The Phillies could have leaned on hard-throwing Velasquez one last time. After all, he was retained this year on a $4 million deal to avoid arbitration during the offseason. They could have handed the ball to their top prospect, starter Spencer Howard who made an injury-rattled debut in 2020 and is expected to be much better in 2021.

But instead, the Phillies made a pair of low-risk, high-reward moves in signing Matt Moore and Chase Anderson to one-year, prove-it contracts. Moore pitched in Japan last year and Anderson was pretty bad pitching in the majors in 2020, but both have a track record as being serviceable starters and each had a ton of talent when they first came into the majors. And after a spring training battle, each will start at the bottom of the rotation for the Phillies this season. If they can be serviceable and stay healthy, it should help the Phillies compete — and also allow them to spent time developing their pitching prospects instead of prematurely throwing them into the fire.

Speaking of that ability the Phillies hope they'll have — to keep the veterans in the lineup and the prospects developing — the organization (and every other one for that matter) lost an entire year of minor league games last year thanks to COVID. They'll be eager to see what they have in top prospects like Bryson Stott, Mick Abel and Luis Garcia, as they progress through Double- and Triple-A and make cases to come to the majors.

We broke it down in detail this fall, but the Phillies have been absolutely dreadful at drafting and developing their own talent. With a new regime in town, led by Dave Dombrowski and Sam Fuld, maybe the team can finally cash in on a draft pick (like they are hoping to do with Bohm) and create a longer window of competitiveness.

Will they go for it?

With Dombrowski known for making blockbuster deals, it will be very interesting to see, come July, if the Phils step on the gas finally and attempt to push for the playoffs and for a deep playoff run. With the team spending more than expected this offseason, it is unknown whether they'd be willing to eclipse the luxury tax threshold to make a big acquisition. But if they are close to first place in the NL East come the dog days of summer, the rumors will fly. And won't that be fun?

As it always seems to be, the NL East could be the best and most competitive division in baseball with the Mets, Braves and Nationals all contenders, and the Marlins looking to build off a surprise playoff berth in 2020.

Here's how Pa.Unibet.com sees the division panning out:

Not only do the Phillies have an uphill climb to win the division, they also have to contend with each of the above teams 18 times apiece. It will certainly be a tall task.

It's been a decade since the Phillies played a postseason game. Bryce Harper, J.T. Realmuto and company (who we haven't even mentioned yet) are here for one reason and it's not to be mediocre, it's to win a World Series.

Pa.Unibet.com has set Philly's win total set at 80.5 wins, and gives them a +285 chance of making the playoffs. If the Phillies want to end their draught, they'll need to get MVP-like performances from the duo we just mentioned, as well as Cy Young-level stuff from aces Aaron Nola and Zack Wheeler.

If their stars play like stars and the rest of the team plays somewhere near or above replacement-level, the Phillies could have a fighting chance. After all, there's a reason they play the games, and why sportsbooks so frequently change their odds.